It all started with a small piece of glass. When I was nine years old my two great-aunts, retired schoolteachers, gave me a little oval of reddish-brown glass, about two inches high by an inch and a quarter wide. The top surface had a thin overlay of white glass which had been cut away to create a cameo of two birds on a branch, surrounded by foliage and flowers. This was all enclosed by a narrow oval line, and the edge had been smoothed and gimped.

‘It was made by our uncle,’ one of my great-aunts said. ‘It was a ’prentice piece, made when he was fourteen.’

‘We thought you should have it,’ her sister said, ‘because you share his birthday.’

I loved it at once. It was so delicate and pretty. There was nothing you could actually do with it, except look at it, but that didn’t matter. I treasured it and everywhere I went, it went with me, even to university, generally amongst my handkerchiefs, to keep it safe. As time passed, I wondered about the basic piece of glass. Viewed from the front it was convex, so eventually I decided it had been cut from a bottle, perhaps a beer bottle or one of those Victorian bottles for fizzy drinks (like ginger beer), which had a marble inside as a stopper. Clearly my young great-great-uncle had not been given a valuable piece of glass to practice on. Yet he was so skilful! The older I grew the more impressed I was that a boy of fourteen could create such a lovely piece.

Then a few years ago, my husband asked what I would like for Christmas. ‘What I would really like,’ I said, ‘would be to have my great-great-uncle’s piece made into a pendant.’

We took it to a jewellery designer who had made other things for us, and I explained that I wanted a very simple gold frame to hold it. She also suggested a small motif at the top, based on the flowers and the leaves in the cameo. So this is what it looks like now: 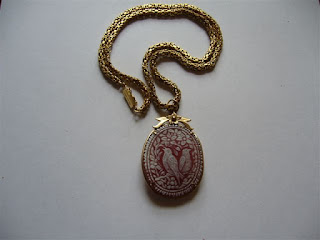 I wish I had asked my grandmother or her sisters to tell me more about my great-great-uncle. Their father, John Hodgetts, was a police sergeant in the nineteenth century, and the glass engraver was his younger brother, but I didn’t even know his first name, or anything else about him.

Then when my mother died, I inherited an exquisite jug which I knew was also his work. It was clear glass, not cameo work, but the design was in the same vein as my little piece – beautiful birds amongst foliage. Very William Morris.

For some time I had been tracing my husband’s family tree, which was easy because the Swinfens were armigerous land-owning gentry and much of the work is already done, but finally I decided to look into my maternal grandmother’s family and learn a bit more about this mysterious great-great-uncle. It’s been a little more difficult.

I discovered that his name was Joshua Hodgetts, born in 1857 and died in 1933. His wife was called Annie Maria and they had four daughters (Gertrude, , Fellian and Amy) and four sons (Rupert, Frederick, Charles and Sydney). That was as much as I discovered at the time, but then last summer we met up with my cousin Susan and her husband when they came to for the Commonwealth Games. They were staying in Callander and commuting to for the games. 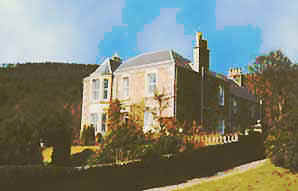 Now you may be familiar with Callander under another name. As ‘Tannochbrae’ it featured in the long-running series, ‘Dr Finlay’s Casebook’. If you remember the series you’ll remember that the doctors’ home and surgery was a fine Victorian house standing on a hill above the town, called Arden House.

Well, that’s where my cousin was staying – it’s now a B&B. We sat out in the sunshine on a terrace that I remember from the series, looking out over spectacular views of surrounding mountains and rolling farmland, just beautiful.

Susan had brought with her an album of family photographs (some more than 100 years old) salvaged from our great-aunts’ house and including some of our mysterious great-uncle Arthur Hand, our grandfather’s brother born 1881, who went out to Alaska. No one knows what became of him. Then we began talking about our great-great-uncle, Joshua Hodgetts. By now I had discovered a little more about him. The gifted fourteen-year old had risen to be a master glass engraver. It seemed Susan had also inherited an example of his work, a vase.

My interest in Joshua reawakened, I managed to track down a little more information about him. I discovered that what I had thought of as ‘cameo’ glass was actually called ‘intaglio’ glass. For much of his adult life Joshua worked at Stevens & Williams, a glass manufacturer in Stourbridge, where he was their chief engraver. Stourbridge had been the centre of English glass-making since the seventeenth century and the intaglio glass made there in the latter part of the nineteenth century was the best in the world. Joshua was one of their most outstanding artists, his work was in huge demand, and he was put in charge of the intaglio department. He was a keen amateur ornithologist and botanist, which explains his recurring motifs, very much in tune with the Art Deco and Arts and Crafts movements of the late nineteenth century. Some of the birds he portrayed are not British but exotic Birds of Paradise, much admired by enthusiasts of the fashionable Chinoiserie style. A man passionate about his work, even after he retired he still took on private commissions.

More research was needed. So far I’ve discovered that there was a glass-making firm called Hodgetts, Richardson & Son who were involved in the Portland Vase project. This Hodgetts was William James Hodgetts, almost certainly the William Hodgetts who was the father of Joshua and his elder brother John, my great-grandfather. And there was an artist, Emily Hodgetts, who produced two paintings of ’s glassworks around 1840-50, but I haven’t been able to establish where she fits into the family. 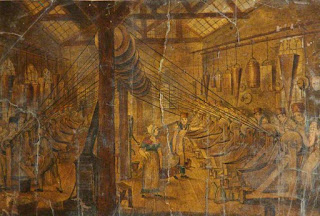 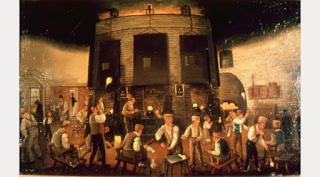 Joshua worked for Hodgetts, Richardson and Pargeter (the original name of the company) as a very young man before he went to Steven & Williams. While at ’s he developed and patented the very first ‘threading machine’, which was used to apply long, spirally wound trails of glass. Venetian glass style required this use of glass threading on the main body of glass. Previously it had been a very difficult and time-consuming process when done by hand. Around the same time Joshua contributed to ’s award-winning stand at the exposition of 1878.

There is a discrepancy between the sources. I have found that one claims that it was William J. Hodgetts who invented the threading machine, not Joshua. I suppose it could have been either of them, or both. 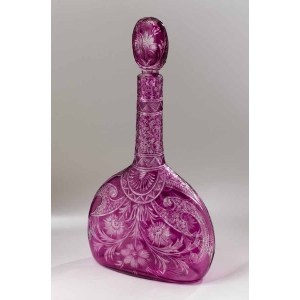 Since seeing Susan, I have done a bit more research and discovered that our great-great-uncle is FAMOUS! People from all over the world collect Joshua Hodgetts glass and pay thousands of pounds for each piece. Heavens! The picture above is a decanter by him which is in a glass museum. Here’s a vase, sold three years ago for nearly £7,000: 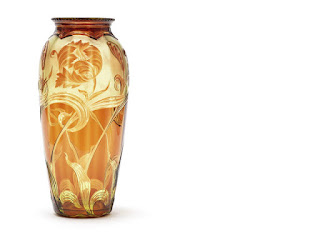 And another museum piece: 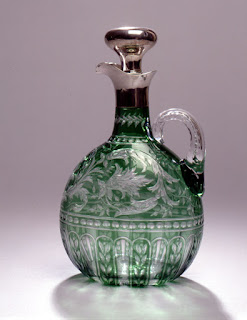 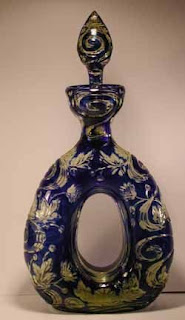 More of his exquisite work: 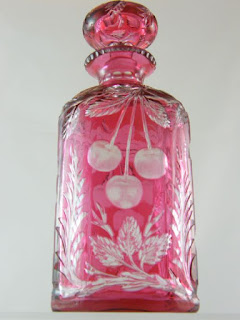 Even the base is decorated: 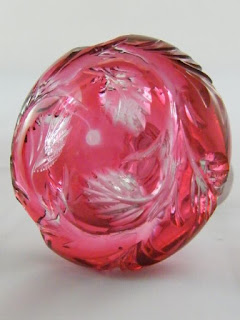 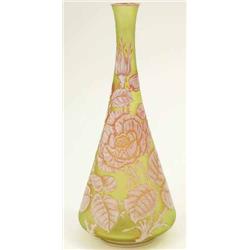 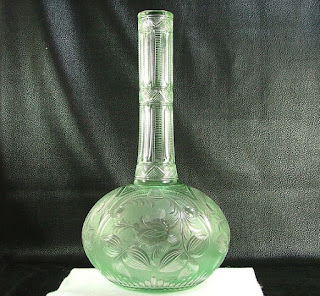 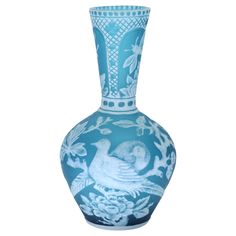 It just shows, one shouldn’t take one’s ancestors for granted. I wish I had inherited his talent, but I’m so glad I share his birthday, and that – as a result – I own what is probably his first surviving piece, made in 1871 by an exceptionally talented boy.

What an amazing story, and such beautiful pieces! Lucky, lucky you to be a part of all that!

His work is absolutely beautiful - and thank you for introducing me to the word "armigerous"!

All beautiful, but the piece you have is the most exquisite of all, both because of the age he was when he worked it, and of the care and interest it aroused in you, but also just of itself as an artefact. Wonderful, thank you.

A wonderful story and indeed what a talent. Thank you for sharing your story.

I do so wish I had known him, or that I'd asked his nieces to tell me more about him. The picture of my pendant hasn't come out very well, but if you hold it up to the light it absolutely glows. The jug I own is lovely, with its delicate engravings of birds and flowers, but being clear glass it doesn't photograph well. Perhaps one of these days, if I'm very rich (!), I'll buy one of his coloured pieces. I'm glad you've all enjoyed Joshua's story. If I ever discover more about the mysterious artist Emily, I'll post about that.

I think yours is the most beautiful of all the pieces - and what a lovely idea to have it made into a pendant. Such an interesting story.

This is so awesome! Thank you for sharing such a sweet story!

What a fascinating story - and such lovely objects! Stourbridge is not far from where I live, and I see there is a museum of glass there which I now want to visit. You are so lucky to have been given the pendant.

And Arden Hoose! It looks familiar - and yet wasn't that a radio series? (Maybe it was on TV later and I've forgotten...)

None of us ever think of asking questions of our relatives until it's too late.

Some of Joshua's pieces are in the Broadfield House Glass Museum. The two paintings by Emily are also there, but I'm not sure whether they are on display. Yesterday we went out for a family dinner and I wore the pendant - in celebration of sharing Joshua's story.

Wow, how amazing! Such exquisite glass, too, and I'm so glad you have a piece of your very own. You must be very proud of him.