Note: When I wrote this post, I  hadn't read Christina Konig's excellent post about LIFE IN SQUARES. I do hope readers of this blog will excuse a slight overdose of the Bloomsbury Group. My post is sufficiently different from Christina's I hope, for this to be excused.

The whole world, it seems,  is Bloomsbury Mad. Actually, ever since Vanessa and Virginia Stephen moved to 46 Gordon Square in 1904, the lives of these two sisters and their friends have fascinated biographers, critics and anyone interested in a story of highly intelligent people and their doings: literary, artistic and sexual. Perhaps it's their sexual shenanigans which have kept the interest alive and the recent BBC drama, LIFE IN SQUARES, did concentrate on that aspect of their lives perhaps rather too much. The drama was quite well done, I thought, though Virginia I felt, was woefully miscast and Rupert Penry-Jones, much as I admire him, didn't appear to be much older than James Norton, playing the older Duncan Grant. I saw no good reason why the same actor couldn't have been used for both old and young, but there you are. The series certainly looked wonderful and Eve Best as Vanessa has made me resolve to wear my string of amber beads round the house, as she did. Most importantly, the drama suffered, I though from only being three episodes long. There was far too much happening in all these lives to cram into such a short time frame. If it had been longer, the characters could have been much more fully developed and the situations, and complicated relationships of the Group could have been explained to those of the viewing public who didn't know the intricate stories of these lives. As well as that, more episodes would have been able to convey the artistic and literary importance of these two women, who, in the time allowed, were just beautiful people who swanned around, with occasional bouts of grief and thwarted love to interrupt the apparent idyll. 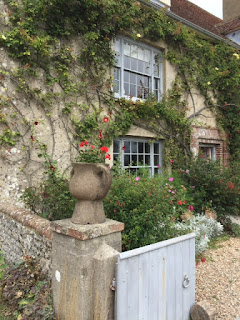 This (above) is Charleston House, Vanessa's home for most of her life.  You are not allowed to photograph the interior, where Vanessa and Duncan Grant and other artists decorated every available surface. You saw the rooms in the TV series, and they are most beautiful. The scale of the house is very small. It's really a farmer's cottage and feels like it: rough, as well as beautiful. The furniture comes from the Omega Workshop, where Vanessa Bell produced wonderful (unsigned) designs for furniture. Duncan Grant's  work is everywhere. He was the love of Vanessa's life and more than that, her closest friend in the world, except for her sister, Virginia. Anyone who missed the tv series and who is interested has only to put Charleston House into Google to see what it looks like. They will also find many of Vanessa's works reproduced. 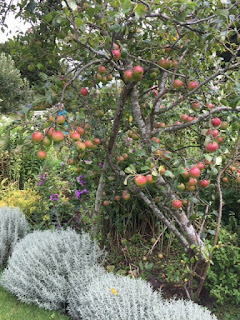 Many people can't stand the Bloomsbury group.  Snobbish, they say. Elitist. Spoilt. Anti-semitic. And on and on. This may very well be true but also, clever, ground - breaking artistically, and leaders of the intellectual life of their day, whose lives are still fascinating to many, including me. I can say exactly why I am drawn to them. It's because of the relationship between the sisters. I'm an only child and I suppose I romanticise the bond that can exist between sisters, because I've always wished I had one of my own. In February, I read a novel which I can't recommend too highly. It's called 'VANESSA AND HER SISTER,' by Priya Parmar, and it's published in paperback by, of course, Bloomsbury.  It is completely gripping and deals with a period of their lives when they were young. After reading that, I'm now reading an excellent joint biography by Jane Dunn called 'A VERY CLOSE CONSPIRACY.' That is brilliant and shows one thing very clearly.  No matter what was going on in their love life, or in their intellectual lives, each sister was emotionally the centre of the other sister's world. They were close, and loving and Vanessa never stopped being the chief looker-after of Virginia. We know about Virginia suicide, and that death is, horribly, part of the drama of their lives and their story. But what is clear from what I've read is that Virginia, for many reasons, was always in a state of precarious mental health.  Vanessa was her mainstay. Leonard Woolf also looked after her, but it was her sister to whom she was most attached. 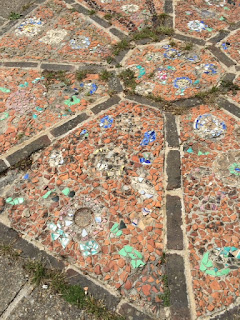 Both sisters  had to be constantly creating.  Virginia fell ill when she couldn't write for some reason, and Vanessa, together with other denizens of Charleston, used their artistic talent to transform everything. Both sisters made beautiful gardens, and the mosaic above shows that every corner of Charleston was worked on: painted, decorated with beautiful pictures and patterns and enhanced by the artist's hand and eye. 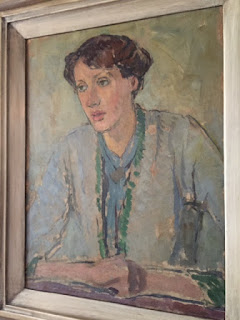 Virginia and her husband Leonard took a house just a few miles fro Charleston, in the village of Rodmell. The house is called Monk's House and it's a National Trust property. There is no café and therefore none of the lovely NT scones but it's a wonderful place to visit. The photo above shows Virginia as painted by Vanessa and below, there's a screen painted by Angelica Bell, Vanessa's daughter by Duncan Grant, which looks like something from a stage set. That seems remarkably appropriate. The conversations and situations both at Charleson and in Monk's House were indeed very dramatic. I also think it's very beautiful. 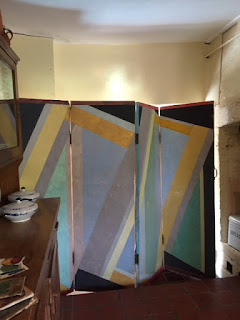 Vanessa's bedroom at  Charleston looks out on to the garden. So does Virginia's at Monk's House. They are beautiful rooms, characterised also by very narrow beds. Below is Virginia's, which is the size of the bunks on overnight trains. This is a single bed if ever there was one. 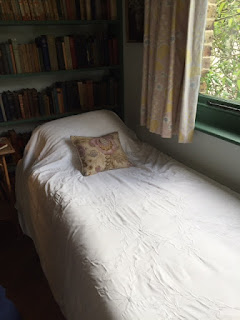 And in another part of the same room, at the foot of Virginia's bed, is a bookshelf which I found the saddest and most moving thing in the whole house. It's full of Shakespeare Plays, each covered in paper from the endpapers printed by the Hogarth Press. Virginia covered the volumes during one of the times when she was ill. I took a photo of 'ALL'S WELL THAT ENDS WELL,' which struck me as ironic. But here we are, still thinking about the sisters, still reading the novels and looking at the pictures and discussing the lives. That's ending well, in many ways.
Posted by adele at 07:00

I love the constant creating - gardens, furniture, novels, paintings - you can feel the energy everywhere!

But is it energy battling to keep something else at bay?

Adele - there's nothing unique or special about the sibling relationship. As with any other it can be good, close, loving, creative - or abrasive, spiteful, competitive, jealous, hurtful. Sometimes, I think, the nature has to do with dynamics established by the parents - but, looking around, I think that it's as often sheer chance. As, again, with any other relationship.

I've just read Alison Light's Mrs Woolf and the Servants, and I'd really recommend it for a rather different angle on the Bloomsbury set - and to anyone who is interested in social history generally. It looks at the servants who worked for Virginia Woolf (and also Vanessa Bell), and their sometimes difficult relationships with their mistresses, and also throws an interesting light on Woolf as a writer.

They are fascinating, aren't they? I've read lots about them - though not, I have to admit, all that much that Virginia wrote, apart from her diaries and 'To The Lighthouse'. And I went to Charleston years ago and loved it - it had just been opened, I think, and Next produced a lovely range of textiles based on the house. We had curtains and duvets - sadly all faded and worn out now. Have never been able to find anything else to match the gently glowing colours.

I thought the same about having Rupert Penry Jones playing the older Duncan Grant - utterly different from the so-called younger one, and hardly any older. It all got quite confusing, and I think they'd have been much better to keep the same actors. The other thing that struck me was that you had no sense of what most of the people actually did for a living - John Maynard Keynes, for instance, came across as merely a rather pathetic eccentric, when he was in fact a brilliant economist. But you suggest a reason for that - the decision to get everything into three programmes. Down to budget, I expect.

I too found the series rather strange - and as you suggest, Adele, it may have been been trimmed down by budget cuts or by the need to get the production done and on for a certain slot. I did enjoy the series, especially the relationship between the sisters, but if you knew little or nothing about the Bloomsbury set (or had forgotten), then it was quite difficult to know which actor was meant to be who, especially with the sudden time-slip scenes and the double cast. I had - without knowing the tv series was to be on - a book on the stack my bedside.: "Bloomsbury" by Quentin Bell, Vanessa's son which was very useful reading/research almost alongside. (eg "Bunny?" Who? What?) But I agree: there was little on screen that showed the work of many of the set. Not even much about the Woolf publishing press , if at all. For me, Vanessa glowed as the centre of this version (along with the "romantic lead" of Morton's Duncan) while Virginia seemed quite sad and second place and teacherly. ps Thanks for all the suggested book titles, everyone.

Thanks for all the wonderful comments! Esp Susan who of course is absolutely right about sisters etc.

I see I ought to have put on here my photo of ALL'S WELL THAT ENDS WELL but I have been busy today and haven't got to it. I will try and insert it later....I have tweetedt the photo if anyone follows me on Twitter.