A mole on the belly - Michelle Lovric

Some years ago, I was lucky enough to spend a few days immersed in an old book at the British Library. This one was called THE Amorous Gallant's Tongue Tipp'd with GOLDEN EXPRESSIONS OR, THE Art of Courtship refined. It was published in 1741.

At the time, the only place to find a book like this was in the library, but now of course it exists as an Ebook too.

One of the things I liked about the Gallant was that it assumed a healthy interest in sex for both genders, reinforcing my private theory that the 18th century was a good time for women, a time when they were allowed to have a sense of humour and sensuality of their own. If you ask me (and don’t, unless you want hours of hectoring) it was Byron and the so-called Romantics who marginalised us as the bruised-flower victims or mothers of bad-boy heroes.

Because 18th century women could cope with laughing, the love advice in The Amorous Gallant was tailed with a bit of rough humour:- a Canting Academy Or the Pedlar's French Dictionary, a guide to unsavoury expressions.

Without googling, eighteenth century types bent on love had to find other ways to test the suitability, durability and sexual enthusiasms of their future partners. The Amorous Gallant suggested an examination of various physical attributes. Moles were a good place to start, although gaining access to all mole-sites must have entailed a certain amount of enterprise and an open mind, if not bodice and trouser.

According to our Gallant:

A Mole on the lower Part of the tip of the Right Ear, threatens the party with drowning.

A Mole on the Belly denotes Whoredom, Luxury and Gluttony.

A Mole on the Lip signifies the Party to be much beloved and very amorous.

A Mole on the left Buttock denotes a pleasing person and are very much delighted in the work of Generation.

A Mole on the Eyebrow signifies speedy Marriage and a good Husband.

A Mole on the Ankle, in a Man, denotes Effeminacy; but in a Woman, a masculine Spirit, and that She shall wear the Breeches.

A Mole on the right Thigh foretells Riches and Advancement by Marriage; and on the private Parts it doth the like.
For further reading on this subject, the Wellcome Library holds a book by Richard Saunders, published in 1653: Physiognomie and chiromancie, metoposcopie, the symmetrical proportions and signal moles of the body, fully and accurately handled; with their natural-predictive-significations. The subject of dreams; divinative steganographical, and Lullian sciences. Whereunto is added the art of memorie. Below is an illustration from it. Perhaps our Gallant studied it before writing his own chapter. 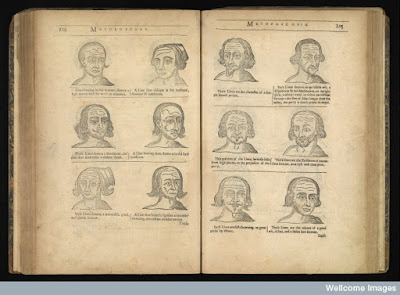 The Gallant also suggested that the lover should pay attention to the Interpretation of Dreams:

To dream of long Hair, and being proud thereof, denotes Good to Women
To dream you have Hair like Hog Bristles denotes great Affliction and Trouble, not without Danger of Violence.

To dream of having many Ears, Signifies the Obedience of Wife, Children and Servants.

To dream that the Eyebrows are hairy, and of a good Grace, signifies good to all, but more especially to Women.

For a fair Woman to dream of having many Eyes is unfortunate, and betoken she shall have more Admirers than real Friends.

To dream of having a large Nose is generally very good to all; for it betokens Vivacity of Spirit and Prudence in Management of Affairs, and Familiary with Persons of Quality.

If a Woman dreams she hath a Beard it denotes she shall quickly have a kind Husband that will make much of her.

For a man to dream that his breasts are hairy denotes strength and good fortune, but for a woman to dream so betokens widowhood and loss. 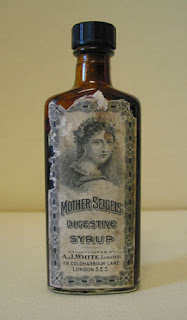 The golden age of quack medicine, as I have written before, coincided with that of cheap printing. The purveyors of such products often produced booklets with useful advice about health, housekeeping and husband-hunting.
Mother Seigel’s Curative Syrup was one such product. Its nominal function: ‘for tonic and alterative effect. Laxative and cathartic’. It advertised itself as the ‘supreme remedy’ for ‘colic, wind, spasms and every possible ailment of the stomach, liver and bowels’. Moreover, it claimed to tone and invigorate every organ of the body, enabling the system to resist disease and lay the foundation of a happy old age.
A chemical analysis revealed that the syrup was largely composed of treacle and water with dilute hydrochloric acid, tincture of capsicum and aloes.

Wildly successful, Mother Seigel was marketed all over the world. I have seen one brochure on its virtues – printed in 17 languages.

But, like all quack medicines, it promised a world of cures – on the working principle that sometime somewhere someone who bought this syrup might get better anyway. It was marketed from the 1880s. In my collection of quack ephemera is a booklet of general advice and problem solving published by Mother Seigal. (Most problems could be cured by the syrup, of course).

But Mother Seigel, who also ran to plasters and pills, additionally had advice for lovers.

She told her readers to look at the eyes and the fingernails. (Now that we are into the Victorian period, that was about all that a lover might glimpse of a mate before marriage.)

Here are some of her tips.

A weak constitution is indicated by thin eye-brows and long, curving lashes.

When the eyes are wide open and set well apart the person who has them will have a rash disposition.

Blue eyes are taken as a sign of weakness – of will.

Eyes that are upturned are said to denote devotion and sincerity.

The very red (finger)nail indicates a person with a hasty temper.

The short, broad nail denotes and extravagant disposition, but usually the ability to earn plenty of money.

Ridges on all the nails of the finger, together with numerous white spots, indicate sadness and an unhealthy state of the system.

If the nails are long, tapering, and white, the person who has them is at times inclined to be quarrelsome and at times selfish.

Stubbornness, sulkiness and also great determination are said to go with very small nails lying close to the flesh and flattish on top.

Personally, I’m sticking to the Amorous Gallant’s dream manual. Recently my nights have been enriched with (medical doses of ) morphine, and I’ve dreamt of many hairy things …

Michelle Lovric's website.
The True & Splendid History of the Harristown Sisters
is published by Bloomsbury.

Hi friend.....It has taken me a while, but I'm learning that letting go of the past is a good thing. It doesn't mean forgetting, it just means moving on. Because the fact is, we can't enjoy the present, and embrace the future when were still stuck in the past.
Read more-Love Advice For Women in Florida