Favourite hideaways of mine in Ireland, by Carol Drinkwater

I have just returned from a memorable trip to Ireland - my semi-adopted homeland because I was actually born in London. My recently-departed mother and all her family were born and bred in County Laios, set in the Midlands of Ireland. The farm her parents spent their hardworking lives running is still in the family and belongs now to two of my cousins. They were a struggling, hardworking Catholic family.
Until 1922, when the Irish Free State came into existence and British rule over Ireland was drawing to its bitter close, Laois was known as Queen's County (a nod to British monarchy).
My mother used to recount to me many stories of local Protestants helping the Catholics and vice-versa (lending one another tractors, or a gallon or two of petrol when rationing during the WWII badly hit their agricultural way of life even though Ireland had chosen a neutral position). She told me that the families of the two faiths lived alongside one another in peace. Of course, this wasn't always the case.

Like most counties in Ireland, Laois has its fair share of grand Georgian or Regency properties built by the Protestant British when they were the landlords of the island while the tenants or farm workers were the less privileged Catholics.
Ballyfin, considered the most lavish Regency house in Ireland, is an example. It was built in the 1820s on the site of previous luxury manor houses, by Sir Charles Coote and his wife Carolyn. It stayed in the Coote family until the 1920s when it was bought by the Patrician Brothers, a Roman Catholic teaching order. At this stage, Ireland was taking back its independence from the British and the brothers ran Ballyfin as a school right through to the twentieth-first century. In 2002, a decline in vocations, less brothers to run the school, forced them to sell the estate on.
Today, after nine years of restoration by its present owners, a couple from Chicago with Irish connections, it has been transformed into a sumptuous five-star hotel, Ballyfin Demesne, set in some 600 acres of manicured gardens.
If your budget can run to even a cup of tea there - room rates start from around 850 euros a night - it is worth visiting just to get a sense of its splendour and to imbibe the stories and ghosts from its past. If I were to covet any of it with Big House envy, it would be its magnificent conservatory.

The history of Laois reaches back at least 8,000 years, to pre-Neolithic times when tribes of hunters roamed the forests in search of nuts and berries to supplement their diets. There are several sites and monuments that bear witness to the history of this region from Neolithic times to modern days, and it is claimed that Christianity came to Laois even before Saint Patrick arrived there.

I spent two or three days in the neighbourhood paying tribute to my mother, leaving a lock of her hair at my  grandparents' grave to reunite her with her family and the place of her birth.

We stayed in Offaly at Gloster House, a Georgian mansion built for the Lloyd family in the 1720s.
This house, with a 1960s convent stuck onto its rear, was sold to its present owners, Tom and Mary Alexander in 2001. It was a purchase of love, no doubt about it. The nuns who had run the place as a rest home for rich elderly women and a school in the convent addition at the back had, through lack of funds, allowed the property to fall into a very sorry state of disrepair. I know this first hand because my mother and I took the gate lodge in 2005 as a rental and over the years we became friends with the present owners. We have witnessed the painstaking renovations undertaken. Today, Gloster is both a stunning private residence and can be booked for wedding and birthday events. If you are looking for a location for a very special occasion, I cannot recommend Gloster highly enough. 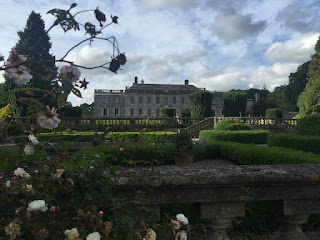 Here is a piece I wrote for my website earlier this year.
http://www.caroldrinkwater.com/introducing-gloster-house-county-offaly-ireland 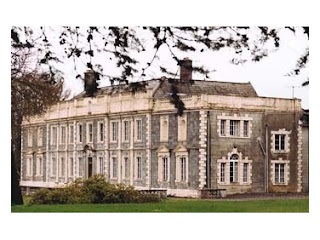 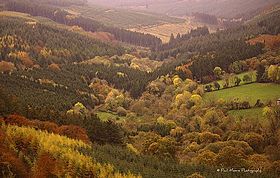 From Laois and Offaly, we turned southwest to the coast, to Bantry Bay, a picturesque stop along the Wild Atlantic Way.

As I write, this year's West Cork Literary Festival is drawing to its close. I was the first event of the 2016 festival. It was held in the library of magnificent Bantry House overlooking Bantry Bay in West Cork, and I am thrilled to say it was a sold-out event. On Tuesday morning I did a smaller event in the tea rooms at Bantry House. Bantry is also a country house I know quite well. My first stay there was, again with my mother, for my first visit to the West Cork Lit Fest. It rained - 'lashed', as we say in Ireland - from the moment we drove into the fishing town till our departure. Again, my event was at the great house. On that occasion we were also staying in the elegant annexe area the Shelswell-White family use for bed and breakfasts. Mrs Brigitte Shelswell-White was so welcoming, lending us two of her Burberry raincoats (bought in charity shops, she assured us) and wellies, showing us into the private areas of the house, that I have been marked by this place, that visit ever since.
Here is a 'snapshot' history of this property: http://www.bantryhouse.com/bantryhouse/visit-2/history/

Egerton-Shelswell-White, Brigitte's late husband, a much-loved patron of the arts in West Cork, was the eight generation of his family to reside at Bantry. Since his death in 2013, one of his children, of which there are six, Sophie, has taken over the responsibility of management of the estate. No mean feat.
The family continues to host events for both the West Cork Chamber Music Festival and the West Cork Literary festival. 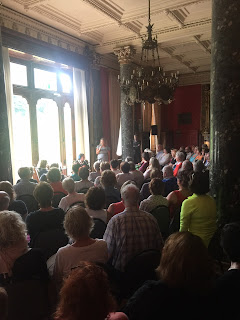 Eimear O'Herlihy, Festival Director, (standing) introducing me. To my left (right as you look at the pic) is Elizabeth Rose Murray who hosted my first event. Elizabeth is also a writer and was appearing at the festival later in the week for her own events.

Here is the jacket of THE HUNGER, a historical novel I wrote for adolescents. It is set in Ireland during the 1845-1849 Irish Potato Famine, published by Scholastic Books 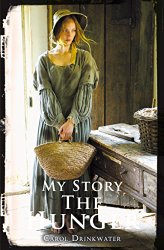 My latest, THE FORGOTTEN SUMMER (the novel I was in Bantry to read from and talk about), is a Summer Special on Kindle e-books. A GREAT deal at £1.99
https://www.amazon.co.uk/Forgotten-Summer-Carol-Drinkwater-ebook/dp/B016JKY3IE/ref=pd_rhf_se_p_img_1?ie=UTF8&psc=1&refRID=CDB7DDQ00XQWABZ4R68R

Or if you prefer to wait, THE FORGOTTEN SUMMER will be published in paperback on 8th September in UK. In Ireland it was published last week 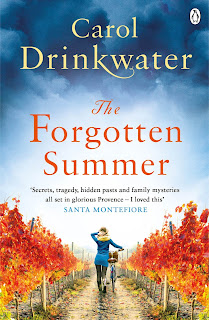 Email ThisBlogThis!Share to TwitterShare to FacebookShare to Pinterest
Labels: Bantry House, Gloster House, The British in Ireland, The Forgotten Summer, The Hunger

A lovely pice and very informative. I always look forward to and enjoy Carol's writing.

Ireland is such a beautiful country, and it's great to be told about parts we have yet to visit!