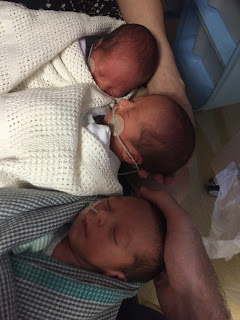 I’ve just become the grandmother of Adam, Felix and Laurence. Twins run in our family but these are the first triplets. It’s still rare - only two hundred a year are born in the UK - and in ancient times it must have seemed miraculous.

In Greek mythology the three Oneroi, often represented as triplets, were immortals born by parthenogenisis (so much less bother). These three dark winged spirits (daimones) flew out each night like bats from their cave in Erebos, the land of eternal darkness beyond the rising sun. A nightmare was melas oneiros (black dream). As with all myths there are many versions but in most stories Morpheus was their leader, who appeared in the dreams of kings in the guise of a man bearing messages from the gods. Icelos, or Phobetor, was the god of nightmares, generally about animals or monsters, and Phantasos, who appeared in dreams as a woman, was the god of fantastical or prophetic dreams.

According to Roman legend, the Horatii, seen here in a painting by David, were triplets who defended Rome against Alba Longa , a rival city in the Alban hills. The two cities decided to settle their dispute with a duel : the Horatii triplets fought against the triplets from Alba Longa, the Curiatii. After two of the Horatii were killed the third brother, Publius Horatius, pretended to flee. When the Curiatii pursued him Horatius turned and attacked them, killing all three.

Horatius's  sister, Horatia, was overcome with grief because she had been engaged to one of the Curiatii, and she wept when she realised her brother had killed her beloved. At this point the legend becomes decidedly unsympathetic: seeing her tears, Horatius stabbed her, declaiming: "So
perish any Roman woman who mourns the enemy." Horatius was sentenced to die for murdering his sister but successfully appealed to the people to spare his life. Some classicists believe that this story was invented to explain the origin of the Roman tradition by which condemned prisoners could appeal to the public to avoid a death sentence.

The Yoruba people in Nigeria have the highest rate of twins in the world (three sets of twins in every nineteen births). They attribute this to their consumption of a particular type of yam. In Yoruba religion it is thought that, about two generations after death, every human soul has a chance to return to earth in the body of a newborn, usually within the same family. Twins and triplets have always been considered magical and, in ancient times, the Yoruba used to reject and even sacrifice them but nowadays their birth is celebrated by the whole community and they are brought up less strictly than other children. These triplets are wearing traditional Yoruba clothes.

In the Yoruba Oyo kingdom there was a tradition that when a couple had triplets, the Oba, or ruler of the town, had to give the newborn babies everything he was adorned with when he was told of their birth. According to the Nigerian Tribune Newspaper Company, in June 2009 the wife of the Alaafin of Oyo, Oba Lamidi Olayiwola Adeyemi III, gave birth to triplets. Her husband gave her a new car and twelve cows, ten bags of yam flour, twenty-five bags of rice, chickens and fish were lavished on the triplets’ christening feast.

There’s a very successful Spanish series of children’s books, later adapted as TV cartoons, called The Triplets (Les tres bessones), by Roser Capdevila, whose own triplets were born in 1969. Whenever the three sisters annoy the Bored Witch, the fat 700-year-old witch who is their babysitter, she punishes them by sending them off to have adventures in various famous stories, including Frankenstein and The Phantom of the Opera, but always returns them safely to their own world. 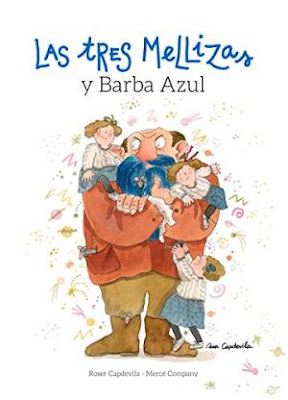 Love the history - love the photo of Adam, Felix and Laurence - and sending the parents buckets of congratulations and stamina!

Congratulations to all, Maria, and happier lives than in Roman times. Such a lovely photo of those babies!

I did enjoy this blog, and glad to see piccies of your grandtriplets. They look very good and healthy. Loads of scope for grandmotherly cuddling! I too had heard about the Nigerian 'twin/triplet cult' from our neighbour, who is Nigerian. He told me that if twins are born in the family, their parents, and all subsequently-born siblings, have their names changed, too, and get names which mean 'mother/father/sister etc, of twins (and presumably triplets). Tough luck on the elder siblings. I haven't told my eldest grandson about this, since his younger brothers are twins. But I never knew about the mythological triplets; I knew about Castor and Pollux, and now a brief Wikipedia search has instructed me that they and Helen were triplets in some accounts, though they came out of an egg. Otherwise, they seem to have been two pairs of twins (Helen twinned with Clytemnestra, two femmes fatales!) You pays your money and you takes your choice. But there is something magical and wonderful about twins, and surely about triplets even more so. No wonder people have felt that throughout the ages.

And Leslie, I think Clytemnestra is much maligned.

Well, yes, Mary, she was abandoned for a long while, so it's not surprising she sought consolation. Not to mention having her daughter sacrificed..But she was certainly fatal to Agamemnon, unless you write a revisionist version with Aegisthus doing the deed and telling everyone she made him do it. Which you might, I suppose. I can't like Helen, though; I imagine her running off to the hairdresser and the manicurist several times a week, and having a huge dress allowance (Silk from China?) If it hadn't been for the Greeks, she probably would have divorced Paris and taken him for all he was worth in an astronomical divorce settlement (case heard by Minos or Rhadamanthus). Then run off with some other bloke.

Thanks for all your kind comments. All three are doing well, they're still in the neonatal unit at the Royal free but will be going home soon.

Congratulations! There is nothing as wonderful as grandchildren. I've got four staying, aged 4 (a Felix), 6, 7 & 8 - two families. They are such fun, and so exhausting! Your triplets will add so much to your life.