It's also inspired by the work of the artist Yinka Shonibare, whose work riffs on colonialism, class and heritage. This is one of his.

It is gorgeous, isn't it, and at first glance looks like a mid nineteenth century Victorian ball gown. Look closer and one realises the fabric is a mixture of different African Wax Prints.

These prints which although popular in Africa, and sometimes called Dutch prints because they are exported through Holland,  are really European, and inspired by Indonesian Batiks. Why Indonesia? Well, Indonesia and Java were part of the once great Dutch empire.

I think the UK appropriated Indian paisley patterns in much the same way, as well as stripping India of it's textile industry in the nineteenth century by the application of trade tariffs in order to build up our northern cotton mills.

Wax prints are the brightly coloured cottons used in West African fashions. If you live in a big UK city you probably have a shop near you that sells these, although the internet has made everything available to everyone. 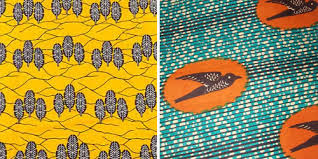 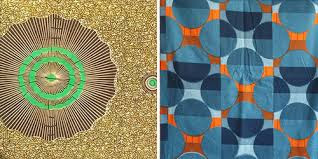 This trade, where goods zig zag across the world - the cotton might be grown in America or the Far East, the cloth is woven and printed in Europe, and shipped to another continent for sale is an example of a very global trade.

And it shows that globalism which has without doubt resulted in massive instability (hello Brexit!) has been around for as long as people have traded. Just this week, finds at a dig at near Peterborough dated 1000BC have included pots and beads from the mediterranean. And of course it is natural, to exchange goods and ideas and having one thing inspiring another. We are all mixtures of a million different influences, from French delis in Hackney to yoga retreats in Norway to Mexican pinatas at children's parties in Budleigh Salterton.

But some of the worst features of global trade strike me as a kind of hellish pyramid scheme where Britain has been happy to be a player until recently when it lost the whip hand (see what I did there) and got knocked off the top of the pyramid. We now seem headed straight for the lowest wage possible society where no one has any job security at all... 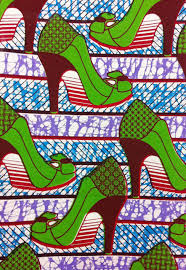 I am sorry this has seemed so muddled. There is I am sure space for an in depth study of all these wonderful fabrics. Some of the prints are phenomenal. But there was another reason for this post. I am at YALC (Young Adult Literary Conference) in London  on July 29th and have given in to dressing up pressure....as my book The Curious Tale of The Lady Caraboo is set in 1819 I thought a regency style frock in a wax print might just cut it....

If you're lucky and it's not too embarrassing I will post photos....

Posted by Catherine Johnson at 06:10

Can't wait to see The YALC Dress...and really enjoyed the post. Much to discuss and think about. Highly recommend Roya Textiles in Peckham which also does online orders. http://www.royatextile.co.uk

That dress is stunning! Looking forward to seeing yours...

Gorgeous fabrics - life affirming in spite of the history! And yes, we HAVE to see photos of you in your dress!

Very interesting post - especially liked the description of globalism as 'a hellish pyramid scheme.' Too right. Instead of being locally exploited by the few in your neigbourhood who've managed to grab 90% or more of the local resources, you can be globally exploited by an international 6%. Whoopie-do.

It's not fair, this selfish grabbing of resources and hanging on to them for as long as possible but I can't, realistically, imagine that it will ever change.

Great to see this post on Shobinare's fabrics. I too fell in love with them when I did an Art History MA assignment on 'Difference' ...particularly loved his take on Fragonards 'The Swing' but such clever and beautiful interpretation of costume in all his compositions.
Maria

Lovely post. Wishing you well in your dress-up dress, Catherine, and look forward to seeing those photographs.

Thanks for the comments all - and Lydia for the fabric shop rec too - but of course as an east ender I favour Middlesex Fabrics of Petticoat lane, a whole 6yard bolt for 16 quid!

I was reading North and South, and a strong chord was struck when the Yorkshire mill-owners said: 'The workers don't realise that our clients can move suppliers at a stroke of a pen,' this being the reason they had to be 'realistic' and accept bad conditions. That was more than 150 years ago, but 'plus ca change'.. The thing is, though the British economy was performing strongly in the eighteenth and nineteenth century, then as in recent years when it's supposed to have been doing so, the people at the bottom of the heap didn't notice it much. OK, they had jobs - but hideously dangerous, exhausting jobs. Though I too have read about the tariff barriers and the destruction of the Indian cotton industry, Catherine, and I wouldn't downplay its evils. A very interesting blog.