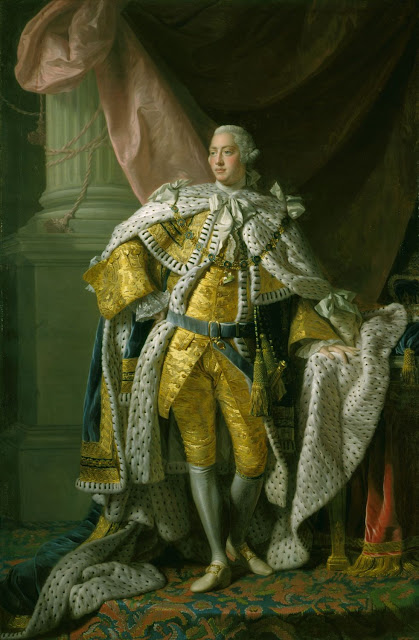 Queen Victoria was brought up reading the novels of Walter Scott and after her first trip to Scotland in 1842, she became besotted with this part of her kingdom, promoting Highland cattle, tartans and bagpipes. On show at the Queen's Gallery, Buckingham Palace, is a selection of Scottish paintings from the royal collection. I skidded past the misty landscapes that could have been in my great aunt's spare room. The paintings that caught my eye were those dominated by clothes.

The full length portrait of George III (1738-1820) by Alan Ramsay (1713-1784) is a superb example of textile and texture. You can see, and almost feel, the gold brocade jacket and breeches, shiny shoes and smooth white silk stockings of the king's coronation costume. You want to stroke the soft ermine lining the voluminous cloak draped around his shoulders. (How many hundreds of winter stoats (mustela erminea) died to make it?) The 23 year-old king is standing, tall and imposing, on a fabulous Persian carpet, beside soft velvet curtains with golden tassels. His legs appear rather long for his small head, but the point of the portrait was to impress with the sumptuousness of his clothes and textiles. Ramsay made 150 copies of this painting at 80 guineas each (about £150,000 in today's money) for sovereigns, ambassadors and courtiers. He was the first Scot to be made 'King's Painter' and given the title 'Principal Painter in Ordinary'. 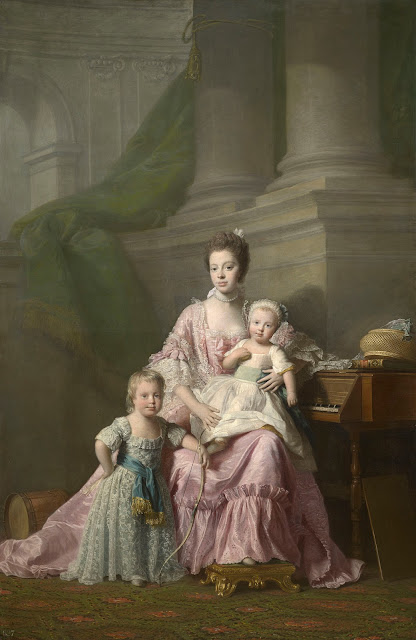 Hanging next to him is George's wife, Queen Charlotte (1744-1818) with her two oldest sons. She is depicted as the young, adoring mother of Prince Frederick, later Duke of York, who is sitting on her lap, and Prince George, later George IV, standing at her side. The Duke of York wears a delicious cream silk frock and lace cap. Boys wore 'coats' then until they were 'breeched' at five years old. (Even my uncle, born in 1909, wore frocks until he was five.) Prince George, then about two and half years old, may be in pale blue lace with frills and a satin sash, but he holds a bow to show how manly and fearsome he will become as a king. When she was just seventeen, Charlotte of Mecklenburg-Strelitz was chosen as a suitable wife for the king. It took two weeks to travel from her home in Germany to London, and they were married just six hours after their first meeting. Over the next 20 years she had 15 children. But of the 13 who survived to adulthood, only three produced offspring. Their descendants include all the current European royalty, and, illegitimately, the recent British Prime Minister David Cameron. Charlotte founded orphanages, and was patron of 'Queen Charlotte's Lying-in- Hospital' the first ever maternity hospital. She supported the education of women, including her seven daughters. Ramsay’s talent is shown in the elegance, subtlety and exquisite colouring of this painting, in which he combines the grandeur of a royal portrait with the intimacy of a domestic scene. In the gallery next door, the full length portrait of  Bonnie Prince Charlie Entering the Ballroom at Holyroodhouse, made me yelp with delight. The painting was executed by John Pettie (1834-93) over a hundred years after the prince's death it was exhibited at London's Royal Academy in 1892. It depicts a moment in 1745 just before Prince Charles (1720-88) marched south unsuccessfully to claim the English throne. 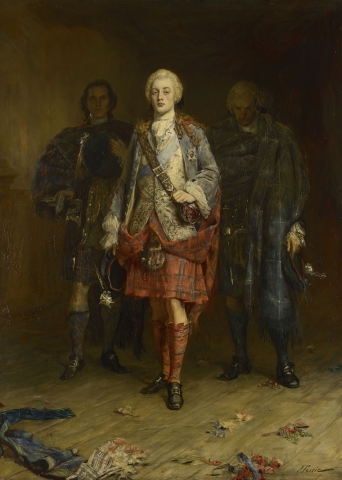 The prince emerges from the shadows into the bright light of the ballroom, with silk ribbons and flowers scattered at his feet. In fact the ball at at the Palace of Holyroodhouse, Edinburgh, was invented by Sir Walter Scott in his novel Waverley. My yelp was caused not by his elegant legs clothed in striped socks, nor by the exquisite silk waistcoat which reminded me of the mayor's waistcoat in Beatrix Potter's The Tailor of Gloucester.

It was his kilt that startled me. My family once had a connection with this kilt.  In 1880 my great grandmother, Janie Bruce, died aged 42, leaving 11 children. The six youngest children, including my grandfather Rosslyn, were sent to live in Edinburgh with their great uncle, a bachelor aged 71, called William Forbes Skene. William's father, James Skene, had been Walter Scott's best friend, and William was the first person to write a history of Scotland from the Scots point of view: The Highlanders of Scotland, their Origin, History and Antiquities (1837). Shortly after the arrival of his great nieces and nephews, he was made the Historiographer Royal of Scotland. One day the children were bored and labelled the drawers of an old chest with the names of their dolls. Inside was some old tartan cloth, out of which they made tiny kilts for their dolls, one of whom was a sailor-doll called Gerald. The chest had belonged to Bonnie Prince Charlie, and the old cloth was his kilt. John Pettie and William Skene lived in Edinburgh at the same time and probably knew each other. Did Pettie ever see the real kilt, either before or after its re-cycling?

The paintings in this exhibition were collected between 1750 and 1900 and reflect the distinctive tastes of Georges III, IV and V, and Queen Victoria. All the artists were born in Scotland and the romantic episodes they painted contributed to strengthening Scottish identity.


www.janiehampton.co.uk
Posted by Janie Hampton at 00:05

Lovely, and fascinating in all the big and little history that you tell from those pictures. Thank you!

Totally fascinating. I love fabrics and all to do with them.!