I recently found this guide book for Ibiza. It belonged to my aunt. She and my mother visited the island in the 1960s. The guide book is full of pictures of islanders in traditional costume and holiday makers having seaside fun. Not a club in sight. 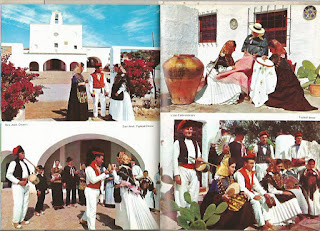 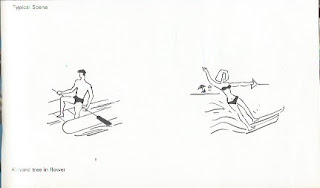 Ibiza has changed a bit since then.

Its reputation as the Party Island began with the hippies in the Sixties. It even gets a mention from Joni Mitchell. 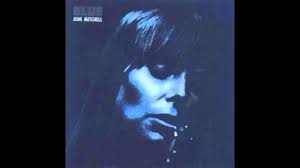 So I bought me a ticket
I caught a plane to Spain
Went to a party down a red dirt road
There were lots of pretty people there
Reading Rolling Stone, reading Vogue
They said, "How long can you hang around?"
I said a week, maybe two
just until my skin turns brown...

Joni must have been tripping down that red dirt road to some of the first open-air beach parties. The other 'pretty people there' being Mike Oldfield, Frank Zappa, Robert Plant, Terence Stamp and Pink Floyd. The islands boho reputation took root in the Fifties when it became a refuge for Americans trying to escape McCarthyism. By the '80s and '90s Ibiza the Hippy Island had changed to Ibiza the Clubbing Island but it is now showing signs of returning to its past.

I made my first visit to Ibiza in April this year. I was going on a Yoga Retreat and, as soon as I arrived I felt very much like the New Zealand writer, Janet Frame, when she visited the island in the Fifties. She immediately felt 'at peace within my own mind, as if I were on an unearthly shore'. 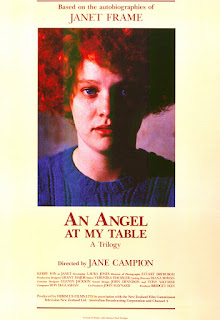 I discovered Janet Frame after seeing Jane Campion's film An Angel at My Table. The third volume of her autobiographical trilogy, The Envoy From Mirror City, describes her time on Ibiza.

'I came into the daylight of the hill where I looked down on the harbour and the buildings across the harbour, perfectly mirrored in the clear tideless ocean,' she wrote on her first morning. Each day, she explored the idea of the mirrored city further.

'As I sat at my table typing, I looked each day at the city mirrored in the sea, and one day I walked around the habour road to the opposite shore where the real city lay that I knew only as the city in the sea, but I felt as if I were trying to walk behind a mirror and I knew that whatever the outward phenomenon of light, city, and sea, the real city lay within as the city of the imagination.'
The Envoy From Mirror City - Janet Frame 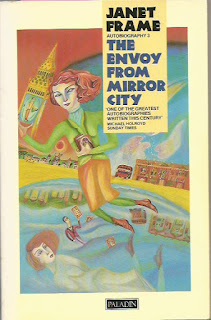 I had just started writing and I remember being transfixed by the Mirror City. The idea has stayed with me ever since. it is a perfect (and perfectly lyrical)  analogy for the magical allure, the obsessions and impossibilities of the writing life. We are always waiting for, wanting to be, the envoy from Mirror City. We know that the city is there, just beneath the surface of things, not quite real, not quite an illusion and not quite stable. It's the place we long to be but as soon as we get near, it begins to shimmer and change and disappear. All we can hope for is a visit from the envoy who calls on us from time to time to remind us of the city's proximity.

Although the Mirror City had stayed with me, I'd completely forgotten that it was Ibiza until I found a reference to Janet Frame and a quotation from The Envoy From Mirror City in Stephen Armstrong's The White Island. I was going to visit a place which had become a part of the landscape of my imagination. It felt satisfyingly serendipitous and a propitious omen for the Yoga Retreat.

I was there for a week, living in a beautiful place, practicing yoga every day. It was a good time to renew my visa to the Mirror City. I felt very much at home on the island and wasn't surprised to learn that it was a place sacred to the Goddess. On Ibiza, she took the form of Tanit brought here by the Phoenicians. Related to the Moon Goddess, Astarte, Tanit was traduced by the Romans and by the Israelites as a receiver of child sacrifice, the legend seemingly re-enforced by evidence from large necropoli, called Tophet, found near Phoenician sites in what was the land of Canaan and at Carthage, which contained the cremated remains of infants, new born and still born children. This, however, is open to interpretation. Just like the Mirror City, if we look beneath the surface appearance, different pictures emerge. The children might well have died naturally and then been given to the Mother for Her protection.  That's what I prefer to think.

In the Archaeological museum in Ibiza Town, Tanit is depicted in different forms from this bust of a rather severe Carthaginian matron to these much more basic and more primitive figurines. 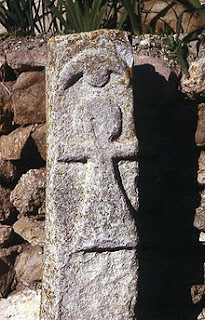 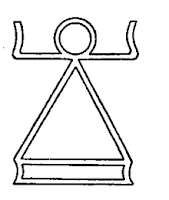 She is often depicted not as a figure at all but as a symbol. Sometimes, She is reduced even further, to a circle above a triangle with vestigial outstretched arms - a version of the universal symbol for the Goddess found from different times and in different places all over the world. 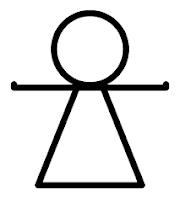 Traces of her worship have been found all over Ibiza. Perhaps She is still there. Certainly, there's a magic about the island, a sense of mystery. it has a powerful attraction, whether spiritual or hedonistic, which calls people back over and over again.

This certainly creates a very different image of Ibiza to the one I had - sounds lovely!

Thanks, Sue. Me, too! So glad I discovered I was wrong. It really is worth a visit - especially the North of the island - especially for any old hippies out here. I loved it!

Fascinating, and I love the image of the Mirror City.