In a fit of post-Brexit, 'let's try and do something useful' at the end of last month, my husband and I repainted the living room. It was at least distracting. It also involved moving round great piles of books which lead to all sorts of rediscoveries. We live in a small flat which means book space is at a premium, so I felt slightly guilty when I rediscovered this. 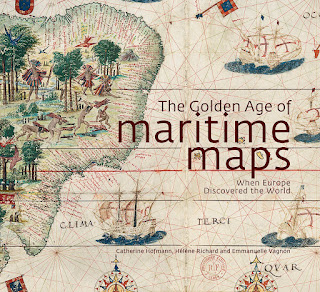 Not that you can tell from the picture, but it's a big beast of a coffee table book, heavily illustrated, thick glossy pages - you know the sort of thing.

I was trying to be brutal and set aside as many books as possible for the charity shop, but I couldn't bear to part with it. It has no real research value, I've read it, I wouldn't use it in teaching and it wasn't written by a friend so it should have gone, but there is just something particularly inspiring about maps.

There are all sorts of maps in our house. I have an old print of the county map of Durham above my desk, just in case I suddenly forget where I am from. I have notebooks printed with early 20th century maps on the cover to scribble in, we have two atlases in the living room (one historical, one just geographical), and then I have the ones I've used for my research. I must have spent hours hunched over Rocque's 1745 map of London writing the Crowther & Westerman series. 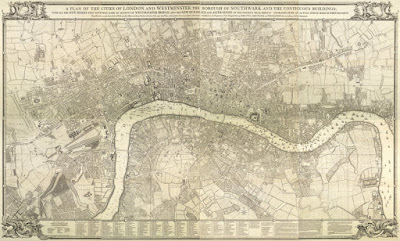 Then I have a folder filled with plans of Paris showing the expanding waters of the 1910 floods, and Edwardian tourist maps of the city showing approved restaurants and hotels. There are hundreds more filed away in the computer, some with character routes drawn on, or set in folders with photographs or drawings that show particular buildings or corners.

The Maritime Maps, like the atlas are in the inspiration category, nothing stimulates the imagination more, I think, than reading unfamiliar place names and travelling across the oceans with your fingertips. The research materials I found vital to give me a real sense of knowing a place. They organised my materials, stimulated my memory when I had managed to get to the places concerned for the research, and, I hope gave me the confidence and authority to convince readers that I knew these places, and could navigate them like a native of the time and place.

Then there are the imaginary maps. I have one in Circle of Shadows showing my fictional 18th century statelet of Maulberg in the Holy Roman Empire. Looking at it now, it reminds me of the treasure maps I used to make as a child, a mixture of the real and the imaged - here is the campsite (real), here is the edge of the wood (real), here is the fairy ring with the treasure buried under the turf in the centre (who knows?) 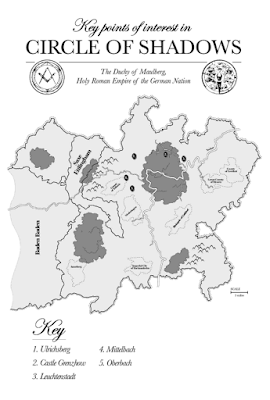 I was talking to a friend who has just begun to write their first novel last week. They sent me an opening scene, and though the writing was pretty good, there was something a bit fuzzy about it and the village they were describing. 'Have you drawn a map?' I asked. The answer was something like 'I want to be a writer not a cartographer', but I realised almost as I was speaking how important that putative map was.

To write convincingly you need to know the world of your characters, you need to know their place in the world, in their community and that's true even if that community is entirely fictional. To draw a map of the village in question, my writer friend needed to make all sorts of decisions or discoveries about how the place and people were organised. Was the church in the middle of the village, or on the outskirts for the convenience of the local lord? Where were the good houses and the bad, the pub and the market place. Was it surrounded by woods or arable land? What did the characters see when they looked out of their windows? Who lives next door to your character? Is there a school? Where does the road lead to? Where do they get their water?

My friend began to latch on to the idea, and I could almost hear the village appearing in their mind as they spoke about where things might be. They began placing scenes and characters within it, and I realised they were doing imaginatively what I often do with my research, feeling out the edges and opportunities of their fictional world and inhabiting it as a writer.

The next draft read like clear water. Fuzziness gone and characters real and alive.

I feel less guilty about keeping the map book now.

I'm also a big fan of maps being included in fiction books as they really add detail to the imaginary scene. However, I'm also a fan of taking a map on any sort of real journey too. Until recently the local library had a full set of Ranger maps available to borrow and I regularly borrowed them for all sorts of trips. Being able to look at a view & compare it with the physical geography reveals many natural and historical features, and generations of planning decisions.

John Rocque is my favourite cartographer.. i have phtotcopied his London map and put it up on my living room wall... and take various routes down lanes and alleys at any spare moment...
And i can see that love of JR come out in your Harriet Westerman books.

Thanks, Sarah! I love spotting all the changes of street names...

I can get lost for hours researching maps and as for place names...

I saw this in a gallery in Grasmere and so wish I'd picked it up. Gorgeous.

Glad it's not just me, Catherine! And yes, Martin it is lovely.

I love maps too, Imogen, and have just spent hours looking at maps of 18th century Rome. Old maps are easily available on the internet now but I do agree that touchable, smellable maps in books have more charm.

Hi Miranda! Yes, the internet is a fantastic resource, but I find it easier to remember what I've seen when it's on paper rather than in pixels for some reason.

Hello! Love maps too, vital part of my planning. I have lots of London. But my next book is in Paris the copy edits have just come in and the editor is disputing the street layout. I have gone back to them and thank goodness I'm mostly right, but I do feel I am on shaky ground, even though I've got the maps....x