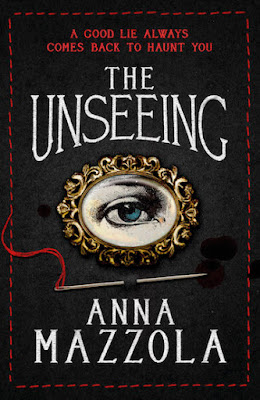 Every now and then a debut novel comes along that stands out from the crowd. The Unseeing by Anna Mazzola is one.

Sarah Gale is a seamstress, prostitute and single mother, incarcerated in Newgate Prison, sentenced to hang for her role in the murder of Hannah Brown. Young, ambitious lawyer, Edmund Fleetwood, is appointed to investigate Sarah’s petition for mercy, yet she refuses to help him. Convinced that Sarah is hiding something, and unable to understand why she won’t act to save her own life, Edmund must discover what really happened on the night of the murder. In the process, he discovers some unsetting truths.

The exact details of the Edgeware Road Murder – a real murder case that became a press sensation in 1837 – remain shady to this day. Sarah, convicted of aiding and abetting James Greenacre in the gristly crime, refused to defend herself, stating only that she knew nothing of it.

Sarah Gale’s silence during her trial and incarceration is fertile ground for a novelist and Mazzola, a criminal justice lawyer, has clearly relished both the research and the possibilities. Real testimony and newspaper clippings are weaved throughout. Sometimes such embellishments can detract from a story but here they add depth to it. Mazzola’s legal background shines through too, especially in the character of Fleetwood, whose pragmatic approach to finding the facts is soon challenged.

It’s hard to believe this is a debut novel. Mazzola’s prose is wonderful and the characters are complex and convincing. The cleverly woven plot is revealed gradually with tension maintained right up to the closing lines. Sarah is particularly well drawn; fascinating, frustrating and sympathetic by turns, echoing Fleetwood’s experience of her as she refuses to help him prove her innocence.

I particularly enjoyed the gritty depictions of poverty stricken 19th century London and its injustices (reminding me a little of, among others, Michel Faber’s The Crimson Petal and the White or Sarah Waters’ Affinity). The depiction of Newgate prison, with its harsh conditions and reprehensible inmates, is particularly visceral. But for me, the book's message about the position of women at the time stood out as one of the strongest themes. Without legal or financial rights, many women’s lives were determined by men. As such, Sarah could come across as a victim, but Mazzola avoids this, ensuring that Sarah finds a way to choose her own fate, even if it’s a shocking one, as she offers up a plausible and satisfying solution to the mystery.

This is a novel that raises questions about the nature of truth, secrets and manipulation, the lies we tell ourselves and what we choose to believe. And it’s a gripping read. If you like your historical crime beautifully written, intelligent and genuinely moving, this is one for you.

Anna kindly agreed to answer a few questions about the book:

Where and when did you first come across the story of Sarah Gale and what was it that fascinated you about her story?

I first heard about James Greenacre and the murder of Hannah Brown in the Suspicions of Mr Whicher. The crime is mentioned only briefly, but seized my attention as it took place in Camberwell, not far from where I live. However, when I read the Old Bailey transcript, I realized this was Sarah Gale’s story. She was accused of helping Greenacre to conceal the horrific murder of another woman and yet she said virtually nothing throughout the entire trial. Her barrister gave a short statement on her behalf saying that she was not in Camberwell at the time of the murder and knew nothing of it afterwards. Very little is said to combat the various claims that are made against Sarah or to deal with the different pieces of evidence that are offered up. Given she was facing the death sentence, I thought that was very strange. What was really going on?

You must have done quite a bit of research into the case. Did you make any surprising discoveries or have any 'aha!' moments?

I did a huge amount of research – that’s always the most fun part, isn’t it? – and had quite a few ‘AHA’ and ‘OMG’ moments, but I’m afraid I can’t tell you about most of them without spoiling the plot. I was unnerved to learn that James Greenacre had left Sarah his spectacles. I suppose glasses at that time were valuable, and it was perhaps an act of kindness, but he doesn’t seem to have been a kind man. Far from it. I wondered if it could have been a message: a warning that he was still watching.

Sarah could be considered a victim – due to her treatment by men, the courts and the press – but she doesn't come across like that at all. Was the issue of women's rights or legal position at the time in your mind when creating her?

Yes, because I think it’s an important part of Sarah’s story and what ultimately happened to her. This was an era in which married women had no legal personality of their own, and when wives who had committed crimes under the influence of their husband were judged to have a defence due to apparently having no mind of their own. At the same time, women who committed crimes were judged to be particularly abhorrent as they were subverting the feminine norm. They were angels or demons – there doesn’t seem to have been much in between – and the other characters in The Unseeing have pronounced views on which they think Sarah is. Sarah of course knows that, and works with what she has.

Without giving away any spoilers, do you think your background as a lawyer helped or hindered you in creating a fictional solution to the crime?

It was definitely a hindrance. It took me a long time, and several beatings from my agent, before I was able to move away from the ‘facts’ and produce a narrative that anyone would actually want to read. I’m of course used to working with real cases where facts are all-important, so it was difficult for me to accept that I had to let go of factual accuracy in order to achieve a different kind of narrative truth.  It’s part of the reason that one of the key themes of The Unseeing is truth and deception.

What's next? Can you tell us what you're working on now?

I’m currently writing my second historical crime novel, which is set on the Isle of Skye in 1857. It’s about a young woman who goes to work for a collector of folklore and discovers that a young girl has gone missing, supposedly taken by spirits, although of course that’s not what she believes. Again, the idea was sparked by a real case, but given my difficulty with leaving ‘the facts’ I haven’t tried to base it on the case in the same way that I did with The Unseeing. I may, however, return to that format for book three. Just to make things difficult for myself.

The Unseeing is out on 14th July and Anna will be our History Girls guest this month. Look out for her post on 29th July!