Actually I have been a HG in waiting all my life. I was a swot who loved school, and from the start what I loved most, apart from English (I was a writer in waiting too) was finding out about the past. Like most children at primary school in the seventies, I did a project on the Vikings, which happened to be an interest of my history-loving father too. I don’t suppose my P4 teacher relished being told by me that there was now evidence that the Vikings may have voyaged as far as America, as that wasn’t in her textbook.

The best things weren’t. When I got to secondary school, encouraged by a wonderful teacher (to whom I have paid tribute in another blog post https://authorallsorts.wordpress.com/2015/08/19/a-letter-to-my-o-level-history-teacher-by-sheena-wilkinson/) I continued to love history, but not just in the classroom. That school, Victoria College, a Belfast girls’ grammar founded in 1859, had its own history that enticed me much more than the too-long-ago Vikings.

Many break-times found me in a certain little hideaway under the stairs, looking at an exhibition about the school’s evacuation to the north coast during the Second World War. There were photos and letters and old essays on display and for the first time I discovered the joy of the everyday artefact, and the power of old photos to evoke a vanished, but not terribly distant world. I never saw another pupil even glance at the exhibition – I think I’d have been very indignant; it had become my private place.

What made it all the more inspiring was that by then I’d also begun on another long-lasting love – that of old school stories, and the world conjured up by those serious bobbed, gym-frocked girls in black-and-white was closer to the world of Malory Towers and the Chalet School than anything else in my Belfast upbringing. Just belonging to a school that had such photos on the walls was a thrill to me.

I had the best history teacher in the world, and romped through the Anglo-Saxons, the Tudors and the Plantation of Ulster. I have especially fond memories of the bubonic plague; then as now I adored anything gruesome about disease and pestilence. (As long as it was safely in a book and preferably now extinct.) I was told off for describing (and drawing) my plague victims with too much verisimilitude – but I like to think that a historical novelist was born in that first form exercise book. 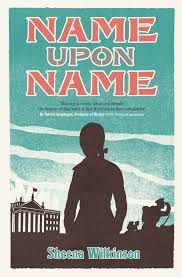 But it was modern history, which we studied for O Level, which captivated me most. This was history I could almost touch, history my granny could remember: suffragettes and the Great War and the partition of Ireland, and then another war.  This was a world I knew from those old school stories, and from the war poets I’d fallen in love with in English Lit. This was a world that seeped through the Victorian and Edwardian streets of my home city, and those black and white photos in the school corridors. A world evoked by the neatly-wound balls of nylon string, made from old clothes, in my waste-not-want-not granny’s Utility sideboard, and by the snaps of her and her friends on Sunday School outings in the twenties, looking exactly like Angela Brazil heroines.

When I started to write historical fiction – short stories at first and then, last year, a novel set in Belfast 1916 – it was this period to which I kept returning. As I write my second historical novel, due next year and set in November 1918, I’m looking forward to sharing some of those enthusiasms here with the History Girls.

And I promise not to make my plague victims too gruesome.

Love that phrase "the everyday artefact"! And the photo is wonderful - 3 personalities staring out - thanks for posting, Sheena.

Welcome to the History Girls, Sheena!

Hey! I was at Victoria College Belfast last week! It's wonderful. Welcome to History Girls, Sheena!

Thanks so much, everyone! I feel very welcomed indeed. Caroline -- VCB always does author visits well. Not that we had any in my young day!