Beneath the Divan: A Family Album by Debra Daley

The oldest, the most historical item that I own is a photograph album that was probably made sometime between 1865 and the 1880s. It’s an object that is significant to me, not only as a family keepsake, but because it has served in a way as an ongoing history lesson ever since it came into my hands when I was a child. It has prompted me to ask questions about provenance and image-making and to undertake research to answer those questions. It represents my first conscious encounter with the past.

My maternal grandparents lived in a small, two-bedroom house in a suburb of Auckland, where they had managed to raise five children on a factory-worker’s wages. A dark mood tended to prevail in my own home, where scarcity and trouble ruled the roost, but my grandparents were social and talkative and encouraging. I loved coming to stay with them in the school holidays. Even the situation of their house, at the top of a rise – and the name of the street itself, Jubilee Avenue – struck me as cheerful. In their sitting room (flowered carpet, three chairs shoved together pretending to be a sofa, industrial-sized heater, bookcase bursting with Dennis Wheatley and Hammond Innes, and a mighty votive TV set overlooking all) there was a built-in divan, on which I slept.

One day, my grandfather opened up a storage well beneath the divan to unearth an encyclopedia that might answer some inquiry I had for a school project. To my surprise, a trove of handsome old-timey volumes lay within, their brittle, spotted pages infested by silverfish. They were Fancy Books. I recall there was a volume of poems by Alfred Lord Tennyson. Actual poems. In a book. By a lord. And, oddly, Proceedings of the New Zealand Legislative Council. Then, I caught a lovely shimmer of mother of pearl and iridescent pāua shell. They formed the cover, it turned out, of a handsome photograph album comprising twenty, thick gilt-edged pages. I was captivated by it at once.

The attraction lay not only in my curiosity about family photographs, but the sense of culture that emanated from this showy object. Culture, in the form of books and art and creativity in general (as opposed to living in a state of ongoing economic emergency), was something that I yearned for, although I couldn’t name the impulse until I was much older.

My grandfather mentioned that the contents of the divan had belonged to his grandfather, but seemed disinclined to offer any more about the man. (William Kelly, I found out later, who emigrated to New Zealand from Ireland with his bride, Frances, in 1863.) I gathered from my grandfather’s reticence about his antecedents that there had been a falling-out somewhere down the line, which perhaps accounted for the careless way the patriarch’s books and other objects had been stored.

By the time I was old enough to realise the historical worth of the divan’s hoard of books, it had disappeared, except for a copy of Hogarth’s Works in folio format, circa 1870. The Hogarth volume was worn through at the extremities and torn at the spine joints, but as I pored over it, turning the pages gingerly, I marvelled at the world within. Rakes and harlots – whatever they were. Marriage à la Mode (The Boudoir of the Countess). Gin Lane. The Midnight Conversation. This book was to prove the entrée ­– when my understanding of its contents improved – to the amazing new land of 18th-century London and, as it turned out, influenced my choice of study at university as well as much of my writing life. 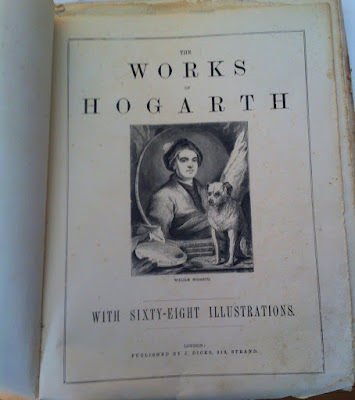 But, that was later. On a first look through the Kellys’ album, I was excited by the subjects. Among them, tattooed Māori women in flounced gowns, a grizzly militia man playing a banjo and two contortionists. And three darkish photographs of Māori that seemed to be printed on metal.

Photograph albums, as far as I knew, were repositories of family experiences. Did I come from people who could count contortionists among their acquaintance? For a very ordinary suburban girl like me, living on the edge of the world, this was a dizzying possibility.

Who were these Māori – most in European dress, but others wearing korowai (tag cloaks)? My grandparents could offer no clue. Only one of the photographs was captioned. A soldier wearing an ill-made uniform with sergeant’s stripes was identified as ‘T. Palethorpe 1 WR’. But, who Sergeant Palethorpe was no one could say. Each time I visited my grandparents, I would sit down with the album and stare at the faces it contained, and the detail of their dress, trying to imagine their lives and their state of mind. I attempted to date the photographs according to the style of the women’s gowns, until I worked out how pointless that was given how far fashions in colonial New Zealand lagged behind the times. But I see now that this exercise of looking for clues in the historical record was a sort of primitive early training that I came to put to use researching fiction.

Eventually, when I was in high school, my grandparents gave me the photograph album to keep. As I grew older, I gained new insights into the meaning of its images. That obscure ‘1 WR’, for instance, written on the photograph of T. Palethorpe – it had bothered me for years. Then a school librarian revealed that it stood for ‘1st Waikato Regiment of Militia’ and that led me to read about the New Zealand Wars (or the Māori Wars, as they were known, one-sidedly, when I was in school), a subject that was not included in our history syllabus at that time. I knew more about the battle of Culloden than I did about the battle of Gate Pā.

As I scrutinised these images for clues, I began to wonder about the studios and these early New Zealand photographers. 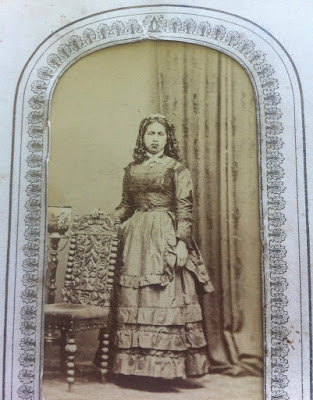 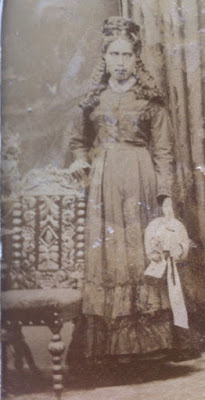 These two photographs of Māori women with moko [tattooes] were taken by Samuel Carnell (active 1870-1905) in his Napier studio and those below in the Wellington studio of Batt & Richards (active 1867-1874). 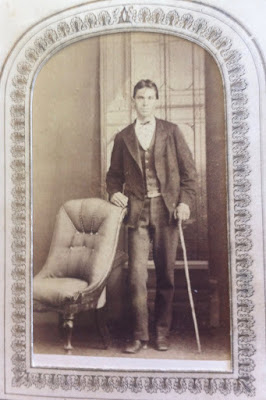 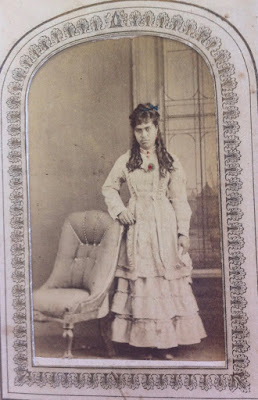 I was amazed to find how numerous photographers were in colonial New Zealand. In 1857 the Lyttleton Times in Christchurch reported the following:

But it wasn't easy to find out about these things in the days before search engines. I need a bigger library – and when I went to university, I found one. That’s when I discovered that this was not a family album at all – at least, not in my conception of one. It was a collection of cartes de visite – which meant that all these people were strangers.

I knew about calling cards, because people in Victorian novels were always leaving them with butlers, but I had not known that they had played a part in a photography revolution. Technological advances – cameras with multiple lenses, glass negatives – made it possible for images to be mass-produced in the format of a carte de visite. The carte de visite photograph was usually a portrait, printed on paper stuck to uniformly-sized card. It was perfect for mailing off to family and friends in far away places or slipped into a cartouche, a cut-out oval window, in an album. They were made by the millions worldwide until the cabinet format eclipsed them at the end of the century.

But what about those shiny metallic photographs in the middle of the Kelly album? They were tintypes, or ferrotypes, I discovered, an image exposed on a thin sheet of iron. I also found that in the late 1860s they had largely fallen out of use, which meant I could approximately date the three tintypes in the album.

Paper prints had a more natural appearance than the black-base of the tintype and their relative cheapness made them available to a wider range of people. Exchanging cartes de visite with friends and relatives and collecting images of celebrities, notables and curious personages in albums became wildly popular from the 1860s until the last decade of the century.

A New Zealand newspaper columnist observed in 1862, ‘Wherever in our fashionable streets we see a crowd congregated before a shop window, there for certain a number of notabilities are staring back at the crowd in the shape of cartes de visite … A wholesale trade has sprung up with amazing rapidity, and to obtain a good sitter and his permission to sell his carte de visite is in itself an annuity to a man…’

Cartes de visite were a lucrative business opportunity for enterprising photographers, but a small country like New Zealand lacked a deep pool of celebrity subjects. It did have, however, a picturesque indigenous population, an attractive ‘other’ culture of Māori whose tattooes, native dress and proud demeanour made them ideal examples of the kind of exotica that was sought after by CDV collectors. After their defeat in the New Zealand Wars of 1845 to 1872, Māori, like Native Americans, came to be considered a ‘vanishing race’. Documenting a culture that was believed to be on the verge of extinction provided a source of income for photographers trying to make a living in New Zealand. Portraits of Māori became highly marketable, not only to individual consumers, but also as an element of the government's burgeoning tourism strategy. George Pullman, who had opened a studio in Auckland in 1867 specialising in ‘Māori Heads’, sold his negatives to the government in the 1870s. Prints were made from them for display at the New Zealand exhibition at the first official world’s fair at Philadelphia in 1876, and continued to be copied over and again in the twentieth century.

Over the years I have discovered that there is more lodged in the photographs in my great-great-grandparents’ album than at first meets the eye. Now when I look at them, I see other things ­– not least being the irony that William Kelly, who eventually became chair of the New Zealand government’s Native Affairs Committee, because he ‘knew natives well’, and my school-teacher great-great-aunt, who encouraged Māori children to learn English, flourished by farming on confiscated land. Of course they too were links in a chain of dispossession that began in Ireland. Life goes up and down like the grass, and sure enough, all the Kellys’ holdings came to be lost, too, one way or another as the twentieth century staggered from war into a depression. Now, there seems to be nothing left of William Kelly and his achievements but this album, and that battered Hogarth. And his descendants.
Posted by debra.daley at 01:00

Yes, fascinating, What a lovely thing to have inherited, enigmatic as it is!