A Lesser-Known Blitz by Katherine Webb


In May last year a friend of mine, and several hundred of her neighbours, were evacuated from their homes in the northern streets of Bath. The reason: the discovery of a five-hundred pound unexploded bomb beneath the playground of a school on Lansdown Road, leftover from World War II. A three-hundred metre exclusion was put in place at once, as the bomb disposal team sought to disable it. Eventually, they managed to move it safely to the Torr Works quarry, where it was blown up, 74 years after it had been dropped.

So, people who live near Bath certainly know that the city was bombed in the war, and I'd known it for some time - it was bombed as part of the Baedeker raids, so called, after the famous travel guides, because the targets were chosen for their cultural importance and beauty, rather than because of any military or strategic significance. Lately, I've been researching the Bath Blitz in more detail, for my next book, and it turns out I'd had no idea of the scale of the bombing.


Across two weekend nights, from the 25th to the 27th of April, 1942, one hundred and fifty or so German bombers flew over Bath in three bombing raids, two the first night and one the second night. Hundreds of high explosives of various sizes, and incendiaries designed to start devastating fires, were dropped; the exact number will never be known - it is known that many fell into the River Avon, and were swallowed by the mud. One has to assume that they're still down there... The Baedeker Raids, which included attacks on Canterbury, Norwich, York and Exeter, were in revenge for RAF attacks on Rostock, the location of important German factories and shipyards. As well as dropping bombs and incendiaries, some planes dive-bombed to as low as fifty feet, and raked the streets with machine gun fire. The damage can still be seen today - notably in the walls of the old labour exchange on James Street:


The idea of setting a book in the Bath blitz has been niggling the back of my mind for a long time, and as luck would have it I stumbled across this pamphlet a few years ago, at an antiquarian book fair in Bath: 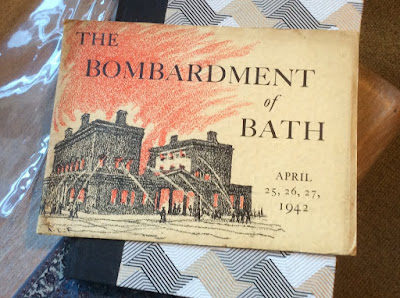 Produced by the Bath & Wilts Chronicle and Herald later on in 1942, this booklet gives a great overview of the raids, and their effect on the city. It's also a wonderful snapshot of the language and attitude of the press at the time:

'Dr Goebbels may now weep his slimy crocodile tears over "the destruction of historical and art treasures in Luebeck, Bath and Canterbury... Did not Goebbels once boast, "When I hear the word culture, I push back the catch of my revolver"?

The author, Mr Claude Wimhurst, goes on to describe the grit and spirit of the city, and, in a fine example of stiff upper lip, to declare that the purpose of the booklet is not to 'harrow feelings',  but to 'steel the hearts' of those fighting the good fight, and to serve as a warning to future generations of the horrors and modern warfare. A timely reminder, likely to be ignored, in these days of turbulent global politics. Nevertheless, the history of the raids is harrowing. Of course it is. Four hundred people lost their lives, over a thousand more were injured, and many thousands lost their homes. And whilst this is small number compared to the 32,000 or so souls who lost their lives in London, the human stories that come from those two terrible nights in Bath are every bit as heart-breaking.

Some of the dead from the first night's attacks were laid out in a temporary mortuary in the crypt of St James's church, only for the church to be hit itself on the second night, and badly burnt. In putting out the flames, the fire service inadvertently destroyed all the identification papers on the dead bodies, so that nobody knew who they were, and many had to be interred anonymously. On May 1st, 247 people were laid to rest in a mass grave.


There are devastating personal histories, described in the Bath Chronicle booklet and in the statistics listed on the excellent Bath Blitz memorial website, bathblitz.org. At no. 3, Howells Court, William and Beatrice Rattray were killed along with their seven children: Christine, 7; Donald, 5; George, 13; Joan, 8; Pamela, 10; Shirley, 2; and William, aged 10. What an unimaginable scene. Sergeant Clifford Ford, a serving soldier, returned on leave to find that his wife, Emily, and their six children had all perished at no. 7, New King Street. A baby girl was found in the wreckage of one house, and taken to Bristol Infirmary, where she died. Of her, the Chronicle records:

'Who she was no one knows. All that can be said about this unknown child victim is contained in the following terse official description which has been preserved: "Age, about two years; hair, fair; eyes, blue-grey; division between top row of teeth; no other distinguishing features." '

One can only assume that whoever was looking after the little girl that night was also killed, and never identified. What a sad end to a tragically short life.

It's easy to spot the gaps in Bath's architecture where Georgian splendour gives way to some 1960s built block of flats or carpark. Often, buildings were not rebuilt until much later, and there is still a ruddy great bomb crater in the lawned centre of The Circus. The famous Assembly Rooms, which had been visited and written about by Jane Austen and Charles Dickens, were badly damaged by an incendiary. They had only re-opened in 1938 after a £50,000 program of refurbishment, and the Chronicle laments that they probably can't or won't be rebuilt again. They were, however, and are now back to their original glory:

Other buildings were beyond saving. One of the oldest mansions in Bath, the Abbey Church House in Sion Hill, was destroyed. Mainly Tudor, the building had foundations dating back to 1138, when a leper hospital stood on the site. Another medieval leper hospital, attached to the Mary Magdalene Chapel on Holloway, was also damaged. Today, it's easy to see, on a walking tour of the city, where the gap left by a bombed-out building has been filled with something more recent - with varying degrees of architectural grace. It's as fascinating to me as peering behind the Georgian facades and finding the medieval, Tudor and Stuart origins of many of Bath's buildings.

King George VI and Queen Elizabeth came to visit, and stood high on Beechen Cliff, in the south of the city, to have a virtual birds' eye view of the damage that had been done. There are familiar stories of making do, of mucking in and not being dismayed. I have always wondered how far that was genuinely the case, or how far merely a statement of intent perpetuated by the media. It must have been utterly terrifying, and the effects of that terror long-reaching in the hearts and minds of the survivors. But the city did mend itself. On April 25th, 2008, Willi Schludecker, then aged 87, came to Bath to lay a wreath during the annual memorial service to the Bath raids. Willi, who died in 2010, was one of the German pilots who'd flown on the raids.

As a local, I knew that Bath had been hit in the Baedeker raids but not about St James or the loss of the IDs of the victims.

(My late great-uncle was a bomb disposal expert and worked in and around Bath during and after the war, but he never talked about it.)

Fascinating! Will look out for the signs next time I visit Bath.

Most of the books I've read with a Bath background have been set during the Georgian period so it's very interesting - though also very sad - to hear about it during wartime. Thank you.