Womens’ Protests in the UK before 1945 by Miranda Miller

Like many of you reading this, I went on the Womens’ March last month. I’m something of a veteran marcher and was reminded of all the other marches I’ve been on; against Vietnam, against Trident and against the invasion of Iraq. Although my protest has always been heartfelt it has never been in the least dangerous or heroic.

In 1792 Mary Wollstonecraft published A Vindication of the Rights of Woman, in which she repeatedly likened men's domination of women to the planters' domination of slaves: “Is one half of the human species, like the poor African slaves, to be subject to prejudices that brutalise them...only to sweeten the cup of men.” 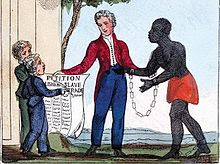 The first women only anti-slavery society was formed in Birmingham in 1825. William Wilberforce commented: “I fear its tendency would be to mix them in all the multiform warfare of political life.” By the 1850s there were more women's anti-slavery societies than men's. John Stuart Mill, philosopher, MP and prominent abolitionist, moved an amendment to the 1866 Reform Bill calling for women to be allowed to vote on the same terms as men. Although he was unsuccessful, women started to set up societies to campaign for female enfranchisement.

Most of these women were middle class but in 1888 the young women who worked at the Bryant and May match factory at Bow went on strike. When I was a child Hans Christian Andersen’s story, The Little Match Girl (1846), used to have me in floods of tears but these young women were real and very brave. The passionate reformer and journalist Annie Besant wrote an article about their terrible working conditions in a radical newspaper called The Link: White Slavery in London. Her writing was powerful and effective: “Who cares if they die or go on to the streets provided only that Bryant & May shareholders get their 23 per cent.” About two hundred matchgirls, most of them aged between 12 and 15, arrived outside the office of The Link to ask Besant for help because three of their colleagues had been sacked for ‘telling lies’ about their working conditions.

In fact these girls had to work sixteen hours a day in return for between 4 and 8 shillings a week. Many of them suffered from “Phossy Jaw” (Phosphorous jaw), caused by inhaling the fumes of the phosphorous. The girl would first suffer toothache, then her jaw would swell and turn green before breaking out in abscesses and turning black. Her jaw bone would then rot away. The only medical treatment was amputation of her jaw bone, which, of course, left her disfigured. The matchgirls were fined for talking, dropping matches or taking a toilet break without permission and if they were late they lost half a day’s pay.

Fifty matchgirls, led by Besant, entered parliament and told MPs about their terrible working conditions. Then they marched down the embankment and attracted a huge amount of support and attention. Bryant and May, in a move reminiscent of the bullying tactics of some modern multinational companies, threatened to import matches from Scotland or move the factory to Norway where labour was cheaper but the girls stood their ground and their strike lasted for three weeks. Their heroism eventually resulted in the formation of the Matchmakers’ Union. 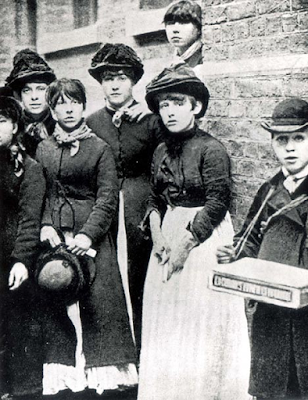 The first large procession organised by the National Union of Women’s Suffrage Societies (NUWSS), whose leader was Millicent Fawcett, in February 1907, was known as The Mud March. About three thousand women marched through the cold wet streets of of London to demand votes for women. The marchers were “titled women, university women, artists, members of women’s temperance clubs and women textile workers gathered from all parts of the country."

"Nobody can suppose that most of the women who took part …can have done so for sport or for the pleasure of the thing…it requires some courage for a woman to step out of her drawing room into the street to take her place in a mixed throng for a cause probably distasteful to many or most of her acquaintances, and to see herself pilloried in the newspaper the next morning by name as one of the '”Suffragists.'" This report in The Manchester Guardian from 1907 reminds us how brave these women were. 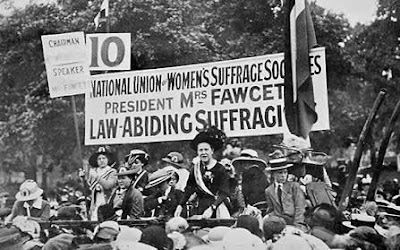 Over the next few years thousands of women marched, drawing vast crowds and acres of mainly negative press coverage. During the First World War the WSPU (The Women's Social and Political Union, led by the Pankhursts), suspended campaigning because they felt that they should support the war effort and also in the hope that their patriotiism might benefit the suffrage cause. Some suffragettes courageously opposed the war and became known as 'peacettes'. Sylvia Pankhurst left the WSPU to set up an alternative movement and founded an anti-war newspaper, Women's Dreadnought.

In 1918 the Representation of the People Act act abolished almost all property qualifications for men over the age of 21 and gave the vote to women over 30 – but only if they met minimum property qualifications or were married to a man who did. The age differential was to ensure that, following the deaths of millions of men in the war, women did not become the majority voters. After the act was passed women made up 43 per cent of the electorate. Women were not given the vote on the same terms as men until 1928, when the Second Representation of the People (Equal Franchise) Act was passed. Emmeline Pankhurst died 18 days before the cause she had thrown her life at was won.

After the First World War women were at the forefront of the peace movement. In 1926 the Women’s Peacemakers’ Pilgrimage ended with a gathering of 10,000 people in Hyde Park; In 1932 the Women’s International League for Peace and Freedom collected 6 million signatures on a petition to the World Disarmament Conference. Women were also active in The Peace Pledge Union, which by 1937 had over 100,000 members, including Siegfried Sassoon and Aldous Huxley. Vera Brittain, seen here wearing her nurse’s uniform during the First World War, was also active. She continued to be a pacifist during the Second World War and criticised the Allied strategic bombing campaign against Germany. Brittain's critics accused her of collaborating with the Nazis because of her anti-war stance although it later emerged that she was listed in the notorious Nazi "black book", which gave the names and addresses of three thousand people who were to be arrested if Hitler invaded this country.

History Girls indeed. I can only bow my head in respect. If the wonderful Annie Besant could return today, she'd find plenty to write about.

A well-informed and timely post, Miranda. I was a bit of a marcher marcher in my younger active days. I even appeared in a front page Guardian photo way back in 1972 or thereabouts of me talking (or was it yelling?)at a policeman astride a very large horse on London's South Bank in the midst of a student protest march against Maggie Thatcher's plans to abolish Students' Unions when she was Education Secretary. She'd just banned free milk for schools, too, so the cry was 'Maggie Thatcher, milk-snatcher, Out!Out!Out!

However, the womens' protests you mention were far more focused and heroic. We should never forget them.

I remember a discussion with my mother as I was nearly 18 moaning about politics and how voting seemed to make little difference (3 decades ago) and she told me about her mum (my gran) getting the vote for the first time, and how she voted how her brother in America would have voted as she disagreed but he was a man and therefore knew better than her. Her whole life she voted for her brother, as she had been raised to believe she was the support, the help, the 'woman' and that she let him be right!
Just to know that strong minded and very independent woman felt that way left me feeling that the vote was too important to not use, I have never missed a vote no matter what level and for what.
The oral history for this is fading and the people who could give reasons why we need to have this and be vigilant are dieing and leaving us with less memories.
Thank you for reminding us all of the past.

Very timely and excellent. I have heard that women's protests, to protect the commons, happened throughout history, but can't put my finger on anything specific. I guess you could count the women of Paris who went to Versailles to bring the royal family to Paris after the Revolution (heads on pikes). If I think of anything more, I'll let you know.Shocking to hear Ruan's story of her grandmother; I wonder how my grandmothers used their votes? And actually, quite a startling thought to realise that my grandmothers were in the first generation of women to vote. Clearly, it's obvious, but somehow I never connected that to those two women, which all goes to show..

An inspiring history and it gives all of us something to live up to.

Thanks for all those interesting comments. I remember that my mother and most of her friends voted the same as their husbands, and when my father used to go canvassing in the 60s and 70s (for the Conservatives) most women would say the same.