What if it had been Princess Georgiana? by Mary Hoffman

The Librarian at my old Secondary School - James Allen's Girls' School - got in touch recently via my website, because she had found a photo: 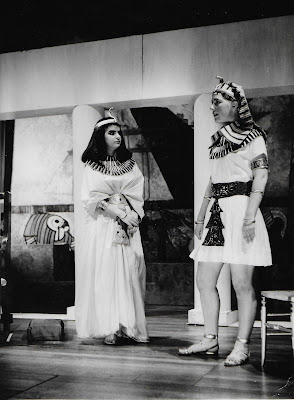 Now, since this school play dates from 1963, it qualifies as history in itself, but you can see it was not dealing with contemporary issues, except indirectly. It was The Firstborn, by Christopher Fry. I (on the left) was playing the part of Anath-Bithiah, the sister of Pharaoh Seti l; his firstborn son, Rameses, was Pamela Dowling (on the right).

Poor Christopher Fry, who lived to be 97, is known today mainly as the author of a play whose title was turned into a joke by Margaret Thatcher's scriptwriters and delivered so ponderously - The Lady is not for Burning. But this play, premièred in 1946, is about the Plagues of Egypt and the tenth, worst, plague of all - the death of the firstborn. Note that Exodus says the firstborn son, "from the firstborn son of Pharaoh, who sits on the throne, to the firstborn of the slave girl, who is at her hand mill, and all the firstborn of the cattle as well."

So a case of primogeniture not working out too well for the favoured oldest son. And Fry is not writing an accurate history. Moses realises that Rameses, who sympathises with the captive Israelites, will be subject to the last plague but he can't save him and he dies. In reality, Rameses ll lived to be ninety.

But it got me thinking about primogeniture and how British history would have been different if we had not had the convention of the throne passing to the oldest son, rather than the oldest child. (This version is called "male preference primogeniture and lasted in Britian from the Norman Conquest until the law on Royal Succession was changed in 2011).

How far back shall we go? Let's try Henry the Eighth. Not his quest for a legitimate male heir, which is well known, but his siblings. The oldest, Arthur, was expected to be king after his father Henry the Seventh but famously died young in 1502. But there was no question of the throne passing to the next child down, who was Margaret Tudor. Of course, their father was still alive in 1502 and a year later, Margaret made the first of her three marriages. (She was the grandmother of both of James l and Vl's parents).

Ah yes, James the First of England. Same situation: oldest child, a son, Prince Henry, dies in his teens and next child down is a girl, the princess Elizabeth. But she marries Frederick of Hanover, and becomes the Winter Queen, while the English throne eventually passes to Charles the First. Hmn.

Charles the Second, the monarch restored in 1660 after his father's execution and the period of the Commonwealth, despite having numerous illegitimate children of both sexes, has no heir by his wife, Catherine of Braganza so the throne passes to his brother, James l and Vll, because that is the way male preference primogeniture works.

So far, without it, we would have had a Queen Margaret in the 16th and a Queen Elizabeth ll in the 17th Century. James 1 was also rich in illegitimate offspring but the legitimate surviving ones were both girls - Mary and Anne.

At fifteen, Mary was married to William, Prince of Orange, her first cousin.

Mary was heir to the throne and James was making people very anxious by becoming a Catholic. Her husband, William was a Protestant and had his eye on the throne of England. And then James's second wife, Mary of Modena,  produced a son, James Francis Edward Stuart, known to history as the Old Pretender.

But rather than elbowing Mary out of the way, this infant precipitated the crisis that forced her father off the throne and put her firmly on it. Doubts were cast over the baby's legitimacy and there were rumours that the real baby had died and a tiny substitute James had been smuggled into the room in a warming pan. Big James produced forty witnesses of the birth to confirm that his son really was his son. Forty! Poor Queen Mary, to have had such a crowd around her childbed.

But back to Princess Mary. The more powerful Protestant faction, fearing that the  new baby would be raised as a Catholic by his mother, pushed the royal couple and their son into exile in France and invited William of Orange to invade.

In this "Glorious Revolution," James was deposed and Mary declared queen. But she was not temperamentally suited to be a monarch, as she freely admitted, and William was clearly not going to accept being a consort. So they ruled jointly, being crowned in 1689, the year after the birth of little James Francis Edward.
WilliamandMary (as 1066 and all That called them) had no children and when Mary died in 1694, of smallpox, William reigned as sole monarch until his death in 1702 and was succeeded by Mary's younger sister Anne.

Poor Queen Anne!  She had seventeen pregnancies in as many years during her marriage to George of Denmark but after many miscarriages and still births and infant deaths, the last one, a son, died at the age of eleven, before Anne came to the throne.

So, on her death in 1714, the succession had petered out and Great Britain and Ireland, as it now was, had to look further afield. Remember that earlier Queen Elizabeth the Second that never was/? The one who was Charles the First's older sister? Her grandson, George, was the nearest male relative and thus began the reign of the four Georges.

The torrent of Georges was halted only in 1830 by the death of the fourth of that name. His only legitimate child, Princess Charlotte, had died thirteen years earlier from complications after delivering a stillborn son. So the British throne went to William the Fourth, George the Third's third son.
It was the fourth son, the Duke of Kent, who was the father of the next British queen, Victoria. So although George the Third was so well-equipped with legitimate sons and his brother with illegitimate ones, the rule of male preference primogeniture could produce no better-qualified heir than this eighteen-year-old girl.

Victoria and Albert's first child was, Victoria, the Princess Royal, but she was soon followed by her brother, who would be Edward Vll.

For the most part, kings and queens of England, later Great Britain, have obligingly produced male offspring in first position, often adding at least one "spare" to the heir.

Fast forward to the Abdication of Edward Vlll in 1936, which left the second son to reign as George Vl. He had two daughters and although his younger brother had two sons born later, Princess Elizabeth became Heir Presumptive and indeed queen in 1952.

Obligingly, she had a firstborn son and he had two. Then the law changed and, if the Duke and Duchess of Cambridge had had a daughter in 2013 - the one I'm calling Princess Georgiana - would have been third in line to the throne, as indeed the real Prince George is. If only they had had a girl first! As it is , I shall not live to see the end of male preference primogeniture put into practice.

Interesting post. I suspect it's easy to go back before Henry VIII to look for more queens that might have been. I seem to remember Helen Castor's book 'She Wolves' was full of potential queens pushed aside for a tenuously found king, and female rulers have probably been sidelined since the concept of rulers first appeared.

Primogeniture may have been abolished for royal succession in 2011, but it is still there in aristocratic titles (Dukes, Lords etc) and among ordinary people when sons inherit houses, over daughters, older or younger. This 'everday sexism' is not even noticed by many parents writing their wills.

Of course, a Queen was deemed weaker and bound to be ruled by her husband. What if Henry VIIIth had realised what an effective monarch Elizabeth would prove? Though the absence of an heir was a major problem as her reign drew on.