I’ve always been interested in early modern female writers. Katherine Parr, the heroine of of my first novel, Queen’s Gambit, was one such writer; Parr wrote two devotional and political texts, which were widely read and hugely successful. At the time it was considered controversial for a woman to write, particularly to write secular works and even more so to seek to publish, and Parr put herself at great personal risk promoting her politics through her work.

An early modern woman was required to be meek, silent and obedient, her domain was the domestic and publishing placed her in the public, male, realm. However as the sixteenth century wore on an increasing number of aristocratic women, like the Countess of Pembroke, who turned Wilton House into a ‘paradise for poets’, were producing secular poetry and dramas for private circulation. 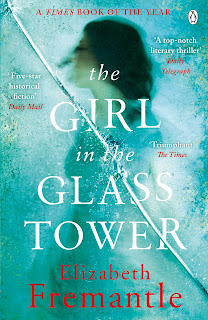 For me one late Elizabethan woman writer always stood out though, as she wasn’t aristocratic and also because she was the first English woman who could be called a professional poet. Yet Aemilia Lanyer is almost unknown outside of academic circles. It is for this reason that I wanted to depict her in my novel The Girl in the Glass Tower alongside Arbella Stuart, to whom she dedicated one of her poems.

Aemilia Lanyer was born in 1569 to a family of renowned court musicians the Bassanos. There is circumstantial evidence that they were of Jewish heritage but Aemilia was baptised as a Christian. After the death of her father she was taken under the aegis of the Countess of Kent, who ensured that she received a humanist education, learning Latin. She also spent time in the household of the Countess of Cumberland as a tutor to her daughter, the diarist, Anne Clifford.

As a young woman she became the mistress of Henry Hunsdon, the first cousin of Elizabeth I, who was some forty-five years her senior. Hunsdon was a great patron of the theatre, and so Aemilia would almost certainly have been familiar with Shakespeare’s circle. Indeed, there has been much speculation that she was the ‘Dark Lady’ of the sonnets, though any evidence for this is at best sketchy. On becoming pregnant, most probably with Hunsdon’s child, she was married to her relative the musician, Alfonso Lanyer. 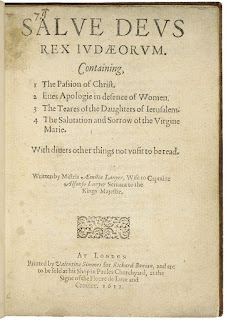 In 1611 she published her book containing several short poems dedicated to prominent women,including Arbella Stuart, alongside the very fine Description of Cooke-ham, the first country house poem published in English, an accolade that is usually given to Ben Johnson’s exceedingly more famous To Penshurst, which was not published until 1616. Dominating the collection is the long poem, Salve Deus Rex Judeorum, a work, satirical in tone and proto-feminist in spirit, which seeks to redeem the vilified women of the Bible, and particularly Eve.

I take up Lanyer’s story in my novel four years later, after she has been widowed and left penniless by her husband’s reckless spending. I imagine her coming across a manuscript written by Arbella Stuart when she was imprisoned at the Tower of London, telling of her life. Aemilia (or Ami, as she is known in the novel) is forced to reconcile herself with the tragic consequences of the time when her own past coincided with Arbella’s. Almost nothing is known about Aemilia Lanyer during this time and these events are the product of my imagination for the purposes of my novel. But what we do know about Aemilia Lanyer’s later life is that she fulfilled her ambition to set up a school near Covent Garden, though it was not without its problems. She finally died in 1645, aged seventy-six but her legacy as an author lives on.

For more information about Elizabeth Fremantle's novels you can find her website on Elizabethfremantle.com. The Girl in the Glass Tower is published by Penguin

Can recommend the book!