Just one week after the assassination of President John F. Kennedy on 22 November 1963, his widow invited Life Magazine journalist, Theodore H. White, to the Kennedy Compound in Hyannis Port. She had a story to tell.

In the resulting piece (which you can read here) White focuses on Jackie Kennedy's hazy memories of that horrific day in Dallas, but at its core is a determined fixation on one idea: the idealisation of something lost. She says:

“At night, before we’d go to sleep, Jack like to play some records; and the song he loved most came at the very end of this record. The lines he loved to hear were: Don’t let it be forgot, that once there was a spot, for one brief shining moment that was known as Camelot.”
Life Magazine 6 December 1963

Jackie Kennedy was the first to link her husband’s curtailed presidency with the Arthurian myth – the idea of the Kennedy era as a glorious golden age that would never be repeated; an enduring association that entered, and has remained, part of the American political narrative.

The media has long been fascinated with the glamorous Kennedy family and conspiracy theories surrounding JFK's assassination. Numerous films and TV biopics have added layers to the story. The latest of these is Jackie, written by Noah Oppenheim, directed by Pablo Larraín and starring Natalie Portman as the enigmatic woman who was such a crucial part of the myth she helped to create.

But this is not really a biopic. The interview with White (played with alternating sympathy and frustration by Billy Crudup) serves as a looking glass through which we watch the assassination itself, the aftermath and JFK’s funeral, all told in flashback through Jackie’s eyes. We are given a snapshot – a momentary insight into a woman who fascinated the public for decades. 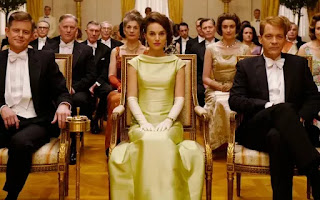 Larraín claims that he refused to shoot the film without Portman and it’s easy to see why. Portman’s Oscar-nominated performance is utterly compelling, the similarity almost eerie. She’s worked hard to capture Jackie’s physicality – the formality, the stiff, awkward mannerisms and flat Transatlantic accent that make uncomfortable opposition with moments of intense emotion. The camera seems captivated by her. Lots of close ups leave Portman nowhere to hide - hammering home the intensity of the character’s distress and the painful scrutiny of the media. She knows the eyes of the world are watching.

And this contradiction is at the film’s heart. Portman presents a portrait of a woman teetering on the edge of sanity; one moment trembling and crying, or wandering, drunk and hopeless, around a deserted White House, the next exhibiting extraordinary strength and perception, and a steely determination to get what she wants. Portman portrays Jackie as complex and conflicted. This is not just the story of a grieving wife falling apart or an inspirational demonstration of fortitude, but both, and all the stronger and more human for it.

We get insights in Jackie’s ‘true’ feelings in moving scenes with an unnamed priest (played by John Hurt, in the last film released before his death). As she expresses doubts about her Catholic faith, we sense not just a spiritual crisis but her increasingly tenuous grasp on reality: ‘‘I lost track somewhere. What was real. What was performance.” And we see that her actions are not entirely altruistic.

The extraordinary soundtrack, composed by Mica Levi, serves as a powerful reflection of Jackie’s precarious state of mind. Sweeping strings seem to tilt and slide, lending a feeling of queasy instability. It’s ethereal and otherworldly, with an ominous edge. The film would have been a very different experience without it.

But this is more than just a character study. It asks questions about history – who writes it and who decides what to present as truth. As Jackie astutely says, "When something is written down, does that make it true?" Surely, a question for our times.

So, should we read Jackie as fact or fiction?


The real Jackie was born Jacqueline Lee Bouvier on July 28, 1929, in Southampton, New York, into a privileged Catholic family. She attended boarding school in Connecticut and Vassar College in New York. By the time she met John F. Kennedy in 1951, she was a promising young journalist working for the Washington Times-Herald. Well read, cultured and stylish, she was, on paper, a perfect politician’s wife. They married in 1953. JFK became President in 1961 when Jackie was just 31. As First Lady, Jackie undertook a vast restoration project in the White House, buying and returning original furniture and many prized historical artefacts. She championed the arts and established the White House as a centre of cultural activity, hosting lavish parties, dinners and concerts. When CBS broadcast a televised tour of the newly restored White House, eighty million Americans tuned in.

Clips from that documentary and other archive footage are used seamlessly throughout - a constant and effective reminder that much of what we’re watching really happened. By 1963, Jackie was already familiar with tragedy. She had suffered a miscarriage and a stillbirth before her first surviving child, Caroline, was born in 1957. A son, Patrick, survived only two days, passing in August 1963, only three months before his father’s assassination.

We get a glimpse behind the scenes of the Kennedy presidency too. Peter Sarsgaard puts in a solid performance as Bobby Kennedy, lamenting missed opportunities and railing against the family’s destiny to be remembered as nothing more than ‘the beautiful people’. In reality, JFK’s presidency was marred by Cold War tensions and the Cuban Missile Crisis. His progressive attempts to expand civil rights for African-Americans were limited by his opponents. Some historians have argued that he doesn’t deserve the accolades and that his successor, Lyndon Johnson, led a much more effective administration. But that’s the point here: Jackie knew this and set out to change the story. She understood how her actions in the aftermath of the tragedy would echo long through history. Her real life involvement in JFK’s funeral arrangements, which she modelled after those of President Lincoln, could not have been a more strident statement. It was indeed ‘a spectacle’ fit for royalty.


Ultimately, that’s the genius of this film. It gives us a compelling, moving picture of grief, while simultaneously deconstructing the myth it purports to celebrate. It challenges the narrative while showing us how that narrative was spun. Somehow, it manages to do this sensitively, with respect.

Jackie gives us another interpretation of the JFK story, another version of the truth, another layer to the myth, but a valuable one. After watching, I found myself reading up, wanting to know more about Jackie and her ill-fated husband. And that, to me, is a mark of successfully dramatised history, whether on page or screen. After all, as Jackie observes:  “Sometimes, the characters we read about on the page end up being more real that the men who stand beside us”.

Fascinating post, Katherine, that begs the question of whether the life of Jackie Kennedy, especially when the wife of the US President is history to those of us who lived through the era and in particular the trauma in Dallas. I had just been shopping with my parents (I was 14 and had just pulled into our drive when our neighbour pounced on us with the shock announcement Jack Kennedy had been assassinated! Remember, there was no social media then. Th BBC went into total shut-down and played solemn music and nobody spoke of anything else.

It was just like when The Twin Towers came down.

Thanks for this, Katherine - your review makes me want to see the film.

I just watched Jackie last night. Your review is excellent and I like how you brought the soundtrack into it. The movie also made me want to know more about the woman. I have read the biography of JFK: An Unfinished Life: John F Kennedy, Robert Dallek and soon I will read a biography of LBJ. But I hadn't realized the role Jackie played in creating the Camelot myth.

Thanks for your comments, everyone. Sally, that's an interesting point. I did hesitate at posting this on History Girls, thinking does this counts as 'history'? But I decided to stick with the HWA definition of at least 35 years prior, and it's certainly history to me!