Many modern chemist shops, as typified by Boots, are large, impersonal places.

They could not be more different from their antecedents in Venice.

The old Venetian chemist, known as the Apothecary or Speziale,  ran a highly personal business, often trading on the cult of his own personality and the special patent remedies he produced. His shop had its own logotype – often an animal, mythical eminence, religious figure or human virtue - which was reproduced on his handbills. More than that, each Apothecary shop, or Spezier, was a fertile ‘contact zone’ between classes, races, professions and the sexes.

His skills and cultural knowledge gave him respectability and social permeability – and so did his establishment, as seen in this painting by Pietro Longhi, 1752. 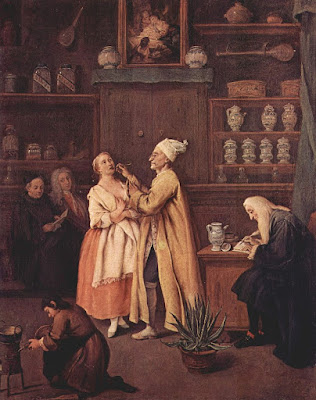 It shows an apothecary in his elegant shop, examining the throat of a young female singer, while an apprentice takes notes and other patients wait their turn. They include a friar and a nobleman.

For Signor Speziale’s premises were no mere dispensary. His shop was luxuriously appointed with carved wood panelling, furnished not just with the picturesque tools of his trade, including enormous mortars & pestles, duck-billed alembics, painted glass and majolica pots and talismanic objects, but also with exotic plants, perfumed oils, books, ledgers and religious paintings, because medicine was a holy art in Venice.

Like art, Venetian medicine underwent a distinct humanist Renaissance. So in Signor Speziale’s shop you would find the curious mixture of theatre and science, modernity and antiquity, that characterized Venetian medicine.

Our Signor Speziale might have the traditional crocodile hanging from his ceiling, a private collection of wonders from the natural world. 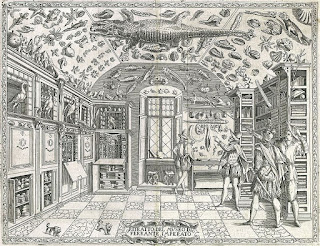 Above is the studio of a Neapolitan collector and apothecary, Ferrante Imperato, who imported some drugs from Venice. Imperato’s Venetian counterpart would have adopted some of this intellectually provoking interior design. The Golden Ostrich, for example, had a narvalus horn to entertain its visitors.

Notice the chatterers, admirers and strollers here … Prices of medicines were fixed by the state, so Venetian apothecaries had to compete for attention and allure clients in other ways. So Signor Speziale’s shop was a place where men might drop in after work – or instead of work. It was clean and smelled delightful, unlike the streets of Venice. The goldsmith Alessandro Caravia observed in 1542 that only paradise could smell better than a Venetian pharmacy.
This pleasant place was therefore a site for socialising, gossip, political discussion and even gambling. People came to play chess, to network socially. There was a convivial atmosphere, as in a coffee shop. Apothecaries offered mail-drop services and could even print for clients.
Our Signor Speziale was often a bit of a newsmonger and a newshound. In 1755, Carlo Goldoni, Venice’s Shakespeare, produced a musical comedy called Lo Speziale, in which the apothecary Sempronio is obsessed with the news cycle. The ‘avvisi’ or news bulletins are delivered throughout the day to his premises. In this picture you see him avidly reading one. 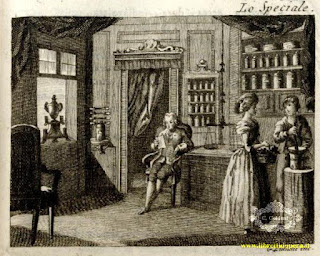 At the times of the wars against the Ottoman Turks, people would gather at the great pharmacies to hear the latest. And as well as disseminating news of battles, pirates and politics, selling medicines, and having learned or philosophical discussions, Signor Speziale might well be working on a book of remedies of his own for publication, to solidify his immortality. Giorgio Melichio at Lo Struzzo was particularly prolific, as were his heirs in business Alberto Stecchini and Antonio de Sgobbis. 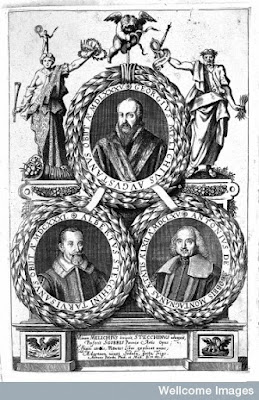 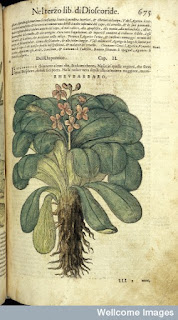 The humanism of the Renaissance also positively contaminated Signor Speziale’s profession. He would know Latin, and ancient Greek. Venice being the heartland of Italian printing, he would have read the works of Avicenna and Serapion, and particularly Galen and Hippocrates.

The apothecaries of Venice were obsessed with recovering the ancient herbal remedies of the past, particularly those of Dioscorides, promoted by the Venetian physician Pietro Matteoli as well as the materia medica of the chemistry kit of course. So a director of one of the great botanical gardens on the mainland might visit our Signor Speziale with samples of medicinal herbs. Apothecaries from other towns in Italy might also come calling, hoping to hear about Venetian novelties and marketing techniques.

Doctors and physicians would of course come to Signor Speziale both to dispense prescriptions and on the hunt for patients. Scipione Mercurio, planning to start a medical practice in Venice, was told by a local physician that he needed only two things to be a success in Venice:

1. to know how to get a woman pregnant and
2. to have a good relationship with the speziali
Doctors issued their prescriptions in person at Signor Speziale’s premises. The doctor might suggest a substitute ingredient if something was not in stock. Physicians often had favourite apothecary shops, but they were not allowed to have a financial interest in them. This did not stop Signor Speziale making handsome gifts – especially of expensive drugs – to the doctors who brought them work.
As well as from the medical professionals, Signor Speziale would receive visits from servants coming to get discreet feminine remedies for their noble mistresses, like Polvere di Hannover – a popular prophylactic against fainting. Or those mistresses might come themselves, sure of a pleasant, entertaining and even educational time.
And finally, given all this activity, Our Signor Speziale might be a conscious or an unwitting host to spies and informers from foreign states or cities, plus the spies and informers of the Inquisition and the Holy Office, watching the spies and the informers of foreign states.
Not surprisingly, some apothecaries were accused of heresy by the Holy Office – the Moor, the Angel and the Falcon were denounced in 1551, along with their apprentices. The Inquisitors (from 1539) kept an eye on the apothecaries because of the books they collected, which often associated healing with magic or ancient pagan wisdom.

Moreover, such dangerous ideas were freely discussed in the sociable environment of Signor Speziale’s shop. In 1611, Angelo Cerutti of the Sun at Arsenale was spied on by the Inquisition. He was arrested in 1612 and tortured probably by the strappado, a rope that tied his hands behind him and lifted him up until his arms broke. On the basis of his confession a Spanish conspiracy was uncovered. Cerruti was exiled.
In 1620 the Golden Lion at San Marco and the Castle in Castello were accused of hosting dissident religious discussions. In 1622 Bartolomeo di Marostica at the Charity was denounced for blasphemy. And later, after the Venetians’ revolution against the Austrians in 1848, a Venetian Speziale partisan was deported to Bohemia. His name was Bernardo Baldisseroto … and he was the father of Giovanni Baldisseroto the pharmacist of I do San Marchi, which can still be seen today as its interior has been rehomed at the Ca’ Rezzonico museum.

All in all, there was more than crushed millipedes fermenting in the ‘front room’ of our Signor Speziale’s shop.

I never fail to think about that when I am waiting in a queue in Boots.

Lovely! I felt as if I was wandering round those pharmacies myself. Love the crushed millipedes. Made me think of Chinese medicine shops in Hong Kong, with snakes and ants and other things preserved in oil, wine, etc.. And beautiful pictures. I like the crocodile hanging up. German pharmacists used to have a wooden unicorn outside their shops.. I have a fridge magnet depicting one.