In November, 2106, I was invited by my old school friend, Carolyn Ferguson, who's an expert on historical textiles and quilting in particular, to join a small party of friends who were going to look around the David Parr House  (http://davidparrhouse.org)  We were shown round by Tamsin Wimhurst, who was previously education officer at the Museum of Cambridge. She is in large part responsible for bringing this amazing place to the attention of the proper authorities. Thanks to her, her committee and others like Sheila Crane (who lived in Gwydir Street and knew David Parr's granddaughter, Elsie Palmer) the house has received a grant from the National Lottery which will ensure its restoration as a place of enormous fascination for students of 19th century art and craft.

The photos accompanying this piece are of the postcards I bought on that day and they do not do the house justice. There was a very good piece  about it by Michael Hall, which appeared  in Country Life magazine of January 4th, 2017  and that may well be on the Country Life website, but (and I'm not sure how they did it) the photographs are very light and saturated with colour. This was not my impression of the house, when I saw it last year on a dreary, damp day, quite unlike what Cambridge days usually  are: bright and light and blowy. 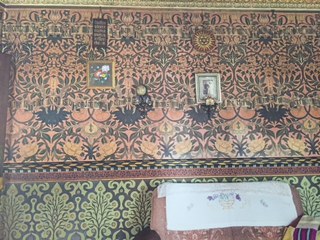 To sum up in brief, David Parr was a painter/workman for the painting and decorating firm of Frederick Leach, which did a lot of work in the city and indeed all over the country.
Parr began working in the firm when he was no more than a boy. He moved into 186 Gwydir Street in 1887. In the 1920s, after the death of his wife, his granddaughter, Elsie Palmer, moved into the house to look after him and stayed there till 2012, when she moved into an old people's home. 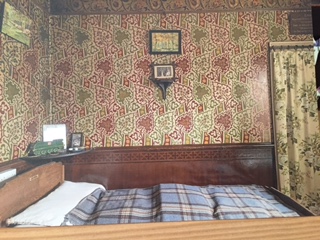 This above is Elsie's bedroom, which was once the dining room. She turned out to be the perfect person to live in the house,  because throughout her long life, she was careful to preserve the   work her grandfather had created in the property. 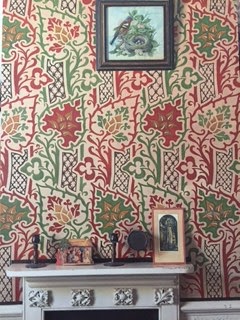 What  he did was cover almost every single surface with most beautiful patterns,  painted by hand and often by candlelight. These were the William Morris-style designs that he'd been painting on the walls and ceilings of college chapels, big houses and other grand edifices during the working day. 186 Gwydir Street is tiny: a standard two- bedroom terrace. The house is very near Cambridge Station and Elsie's husband worked on the Railway. His coat is still hanging in the house, and looks as warm as it ever was: thick, navy blue wool. 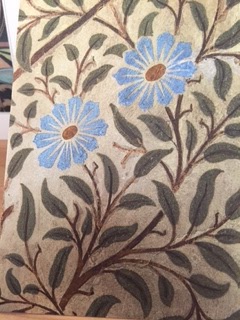 When we visited,  we sat in the front parlour (the first picture, above).  There were six of us in the room and it was a bit of a squash. It was also very dark indeed. We peered at the beautiful painting on the walls and ceiling, and I was ...there is no other word for it....gobsmacked. When I tried to compute the hours that David Parr must have put in, I felt quite exhausted. Fortunately for us, and for future visitors to the house who'll be able to come and look around it when it's restored and made safe for visitors, David Parr was a tidy and organised person who kept a record of everything, so that you can read how long it took him to paint particular bits of each room. He listed paints and materials and his tool box is still there, for anyone to see.  It's clear from some of the decorations that he'd picked up bits and pieces from the sites he worked on during the day and brought them home to add a bit of luxury to the rooms.  The window, below, might have been made by others in Frederick Leach's firm. 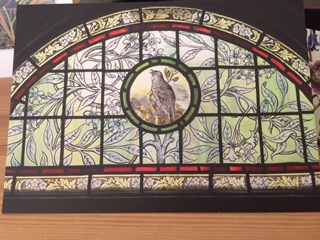 Another touching and fascinating thing about the house is the layer of 1950s décor that speaks of Elsie and her husband's life in 186, Gwydir Street. She preserved her grandfather's work brilliantly, only covering up bits of it and not ripping out a single thing. If you look closely, the top three pictures show family photographs in frames on the wall or on the mantelpiece. There are also pictures in frames hanging on  the painted walls, which Elsie and her husband must have been fond of.

The little parlour we sat in while we listened to Tamsin Wimhurst telling us David Parr's story was dark and shadowy. The blinds were down in order to preserve the colours of the paint but even so it was clear to us that the painted walls are most beautiful. They will be even lovelier when they're cleaned up, and restored to their original glory. I can't wait to visit this place again. It's truly magical. The traces left by David Parr and Elsie Palmer bring us very close to knowing and understanding this fascinating bit of the past.  I have every intention of revisiting this place in a novel one of these days....
Posted by adele at 01:30

How wonderful! Would love to visit but it sounds as if that won't be possible for a while yet.

Yes, and a moving example of a family care and love down the generations, too.

About two years, I think...you would love it, Linda. And yes, Sally, it does show that very strongly.