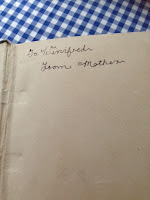 I don’t remember where I picked up my copy of Angela Brazil’s The New Girl At St Chad’s. It’s a shabby 1920s reprint, falling to bits now. To Winifred from Mother it says in careful cursive on the flyleaf. I don’t know who Winifred was. I wonder if the book bore only her mother’s name because her father had died in the Great War – given the book’s age, this is not unlikely. Or did her father disapprove of school stories, and refuse to join his wife in gifting something so frivolous to their child? Perhaps he thought Winifred was too old for school stories. Perhaps Winifred longed to go to boarding school and he resented being unable to afford it. Because – yes! He was disabled after his war service and couldn’t earn much…

You can see why I am a novelist rather than a historian.

My house is full of ratty old school stories. My excuse is that they were my PhD subject. But really, I just like them. Nowadays I seldom reread them – only The Chalet School, the Abbey series and occasionally Dimsie. Oh, and Josephine Elder, of course. But the books themselves are so pretty. Even this cheap 1920s reprint of The New Girl At St Chad’s is reassuringly fat and solid, with clear, if tiny print, and illustrations of no small charm.

In case you are unfamiliar with the story, let me tell you that the eponymous New Girl is one Honor Fitzgerald, from County Kerry, sent to be tamed at an English boarding school after one too many Wild Irish Girl exploits – involving buying a horse without permission. (Horses are never far away from Wild Irish Girls.) An ardent Home Ruler, she objects to wearing the orange hat band that St Chad’s demands. She is Wild and Rebellious and full of Passion. But she is made of sterling stuff deep down, and Makes Good. And so on.

In my 2015 novel Name Upon Name, set in 1916 Belfast, I desperately wanted my heroine, Helen, to read The New Girl At St Chad’s. Belfast-born Helen is, like me, from a dual Nationalist/Unionist heritage, which leads her to question her identity and sense of belonging, as I had always done growing up:  ‘I don’t know if I feel British or Irish – I think I’m both, but I don’t suppose that’s even allowed.’ (It would be many years before the Good Friday Agreement would enshrine Helen’s (and my) right to identify as both British and Irish. You can see why I wanted it: Helen wondered why all Irish girls in English school stories had to be wild and rebellious. She wasn’t wild at all – but perhaps that was because she wasn’t a proper Irish girl. Having only ever seen Winifred’s old 1920s copy, I had no idea when the book was published. I hoped it was before 1916. Luckily it was first published in 1912, so there was no problem with Helen reading it, though she would have read an earlier edition than Winifred’s. 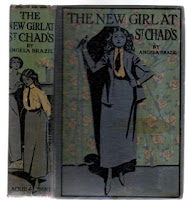 When I go to schools to talk about writing books set a hundred years ago, I often bring old Angela Brazil books with me and tell the children that these were the Harry Potters of their time. I don’t know if they quite believe me. They are so decorative, so old-fashioned, so unchildish. But I do hope, as I pass them round, that they give someone the same little thrill they give me, and Helen, and Winifred. Someone a bit geeky, and history-loving, and odd. Someone like me. Someone who might weave stories and grow up to be a History Girl.

The books we love and 'live' as children really do influence our lives, don't they! Those covers show wonderful artwork. Thank you, Sheena.

I used to read school stories as a child, along with the pony stories, the Enid Blyton and the Greek myths...(I read Robert Graves' book on the subject before I was out of primary school). I loved all the midnight feasts and the mystery-solving. Thinking about it now, I doubt I would want to attend boarding school where you couldn't escape the bullies for the weekend or even the evening, and where, from what I hear from a friend who did go to boarding school, the food was awful, unlike at Hogwarts! But the books were fun.