Curves and Corsets by Julie Summers

'Wartime fashion? Was there such a thing? Is there enough to write a book about it?' That was my immediate reaction when I was asked to write a book for the Imperial War Museum about wartime clothing and clothes rationing. I thought it was rather a flippant topic and was not sure it should be taken too seriously. How wrong I was. After two years intensive research I understood that it was far from trivial. By the end of the Second World War the government had control over every aspect of people's lives, from the length of men's shirts to the width of a gusset in women's knickers. The resulting book Fashion on the Ration tells the story of how fashion and clothing was an issue from the top to the bottom of society and the democratisation of fashion as a result of clothes rationing and mass production has had an impact on the way we view clothes and fashion today. 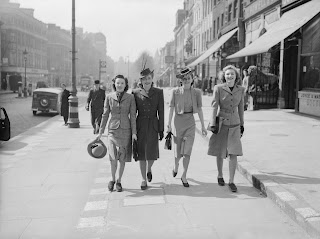 When I give a talk about wartime fashion I listen with fascination to memories from audience members who recall parachute silk dresses, Make-Do-And-Mend shirts, thrice darned stockings and coats made from blankets. Some people remember the era with pleasure and tell me about how they loved their Liberty bodice or their Land Army uniform. Others recall patched jumpers and empty department stores. But almost everyone has something to say about underwear. I suppose it is the most intimate detail and it is endlessly fascinating. There is something that is very ingrained in the collective memory about wartime knickers, bras and, above all, corsets.

There is almost a whole chapter devoted to corsets in Fashion on the Ration because it was a topic that exercised not only women who wore them but the civil servants in the Board of Trade who had to guarantee their supply. And it was no easy job. Over 18 million women wore corsets in the late 1930s but wartime production dropped to just 9 million a year and this was the cause of much heartache, not to say irritation. The reason is simple: corsets were made up of three important constituent parts, all of which were necessary for the war industry. Metal was needed for aircraft production so the stays were replaced with compressed cardboard, with disastrous results. Cotton supplies dropped during the war as world cotton prices rose and the number employed in the cotton spinning and weaving industry fell by thirty percent. Rubber became a rare and precious commodity after the fall of Singapore in spring 1942 as the Japanese held the majority of the world’s rubber supplies in the Far East. Finally, the expert corset makers, with their highly skilled workforce of machine operators, often switched to making parachutes, to which their expertise and equipment was ideally suited. As a result, corsets were in short supply and what was available was often very poor quality.

One young mother, who had just given birth in the summer of 1944, wrote a furious letter which was published in Time magazine in which she took the Board of Trade to task, even naming Hugh Dalton, the then president, in her diatribe: ‘There should be no false modesty about this very essential article … After the birth of my second child the sight of my figure enclosed in a utility corset nearly paralysed me. True, it caused a certain amusement to my family, but I didn’t feel funny, only ill and unhappy … I found that the boning at the front consisted of three pieces of compressed cardboard. I defy even the most pugnacious cardboard to do anything but follow the shape of the figure it encloses … A band of infuriated housewives should force Mr Dalton into a utility corset and a pair of the best fitting utility stockings he can buy. I would add a saucy black felt hat for which he had to pay four guineas and a pair of those ghastly wooden-soled shoes. He should be made to walk one mile, then stand in a fish queue for an hour. By the end of this time his utility stockings would [droop] from knee to instep in snakelike coils and twists. His corset would have wilted into an uncomfortable, revolting mass of cotton and cardboard. He would find himself supporting the corset, instead of the corset supporting him. May I suggest this would be a very speedy remedy?’

This glorious image may raise a smile but it was a serious matter and many women, who had been used to the support of their pre-war Berlei or Spirella corset felt uncomfortable and very aggrieved. The women’s fashion magazines did their best to advise women on ways of keeping their corsets in good order and they encouraged young women to learn to do without by practising core body exercises.

Fashion on the Ration was not just a story of utility corsets, grey Forces bloomers and austerity designs for skirts and coats. There was another side to the story which I had not expected to find and this was the significant role played by the haute couture houses in designing fashion for the export market. The appeal of export sales was that it brought in much-needed currency and over the period of 1938 to 1946 fashion exports rose from £98,000 to £507,000. Paris, as the centre of the fashion world, was out of the picture from 1940 until the liberation of France in 1944 and London was quick to take its place. Shows were organised for South America, South Africa and the USA with designs by Molyneux, Hardy Amies, Digby Morton, Norman Hartnell and Bianca Mosca rising ‘phoenix-like…from our dustsheeted London life.’ So popular were British designers that they had major shows in America, South America and South Africa over the course of the war.

The government was quick to realise how useful the high-profile designers such as Norman Hartnell, Dibgy Morton and Edward Molyneux were both for the export but also for the home market. In 1942 the Department of Trade introduced the Utility Clothing Scheme that ran alongside the government's austerity programme that limited the length of men's socks, the number of pleats in women's skirts and the design of children's underwear. In a move of exceptional emotional intelligence it commissioned eight of the country's top fashion designers, including those three giants named above, to design eight garments each for the Utility Scheme. The press was delighted and so was the public. Women on the street could be dressed by the Queen's designer for 30 shillings rather than 30 guineas. 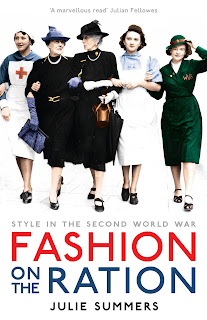 It sounds a fascinating book.
My aunt tells me that her mother firmly believed that women's spines were too weak to hold them upright without a corset and that you had to wear one for your health. My aunt had many battles with her when she wanted to stop wearing corsets.
Men's spines, it seemed, didn't need corsets to support them.

This is nostalgic, as although I am from the postwar generation, I also had to wear a liberty bodice as a child in the late1950s! I don't remember feeling cold though, even though we spent a lot of time outside in winter. A teacher friend tells me that modern infants hate being out in winter, as their clothes just don't keep them warm enough. So perhaps there was something to be said for utility clothing.

I wore a Liberty bodice in the 1950s, and my mother insisted that I wore a vest underneath the bodice - so no danger of me feeling cold! But the bodices were definitely out of fashion by then and nobody else in my school wore one. Actually, I was convinced, at the time, that nobody else in the entire world wore them. The worst thing about them was the horrible little rubber suspender buttons hanging from the lower edge!

It sounds fascinating, even to someone who's never been (knowingly) near a corset: no doubt elderly female relatives wore them, but I am far too young to remember - though I do recall dad talking about his demob suit and mum waxing lyrical about getting hold of some parachute silk, somehow. I like the idea of Dalton, the man instructed to form the SOE and 'set Europe ablaze', being forced into utility wear! Good luck with the book!

Whenever I see that 'Utility' sign on furniture, or vests, I know the thing has quality. I wore a liberty bodice too - inherited from my war time sisters. But I wasn't allowed the stockings to go on the suspenders - too grown up!
My parents couldn't afford to buy clothes, so they swapped their clothing coupons for clothes from rich relatives, as you had to use them even for haute couture. ( probably illegal!) Then my mum would cut up the ball gowns into frocks for us daughters.

I enjoyed reading your book, it brought back many memories for me. I wore Liberty Bodices, over my cotton vests and under my Winceyette petticoat. (It was cold in those Welsh Hills).

I used to have parachute silk knickers too! My Mum made almost all my outer-clothing.