I’ve spoken to several friends who feel that there have been too many elections lately and that voting, far from being a privilege, is a bit of a bore. It’s worth remembering that in this country women didn’t get the vote until 1928, there was  no secret ballot until 1872 and until the Reform Act was passed in 1832 voting was a very different experience.

You had to be a male freeholder with an income of at least forty shillings a year - about 250,000 men. Voting was by a show of hands and each man had to go to the Returning Officer and register his vote. If you lived in the country, as most people did, the local Squire could scrutinise the poll book to make sure his tenants voted the ‘right’ way. If necessary the candidate’s agent would take voters to the polling booth and bribe them with beer and beef.

Elections could go on for weeks and were usually accompanied by riots, civil disorder, corruption and drunkenness. The local militia or troops were often called out to restore order. Until 1785, when the length of any single election was limited to fifteen days, a general election could take months. A candidate who was unsuccessful in one constituency could move to another as long as he was sufficiently determined and rich: elections were the stage on which great families acted out their rivalries and they sometimes spent as much as £100,000 to secure a seat.

Why did they bother? Although MPs got no salary they had enormous influence. A rotten borough, with a tiny number of voters, could be used by a patron to gain unrepresentative influence in the House of Commons. One example of this was Old Sarum, a hamlet on a hill near Salisbury. the Pitt family owned it from the mid-17th century until 1802, when they sold it for £60,000, even though the land and manorial rights were only worth £700 a year. Many towns which had grown up recently, like Manchester, had no MP at all.

Once elected to the House of Commons, an MP would be offered substantial bribes. The phrase `before you can say Jack Robinson' comes from the name of King George III's agent, who persuaded MPs to vote whichever way the king wanted with his ' golden handshake.' As the MPs went out to cast their votes, Robinson waited for them at the door, shook their hands and filled them with gold coins.

Women who were educated enough to be interested in politics could play a part although they couldn’t vote. Westminster was of course an important constituency because of its position and also because it had more voters than anywhere else in the country. In 1784 there was an electoral battle there between Cecil Wray and Lord Hood, both Tories, and the Whig Charles James Fox. Fox was a very attractive man and a small army of glamorous women canvassed for him. 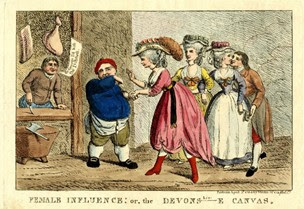 In this satirical print from 1784 we see Georgiana, the Duchess of Devonshire, canvassing a fat butcher who stands holding the duchess's left hand in his left hand, while he wipes his mouth on his sleeve and leers jovially towards her. Another butcher leans, knife in hand, grinning as he he says, "By George I'd kiss the Dutchess". The duchess has a fox's brush in her hat, inscribed 'Fox'. Behind her walk two ladies arm in arm, both wearing Fox favours. They might be Lady Duncannon, the Duchess’s sister, and Richard Brinsley Sheridan’s wife, Elizabeth. One of them turns her head to kiss an artisan wearing an apron while she slips a purse into his hand. Whether due to the support of all these fashionable women or his own charisma, or both, Fox won the election.

This hand covered etching in the British Museum is anonymous. If the Georgians were unlucky in their politicians they were extremely fortunate to have wonderful satirical artists and I think they can tell us more than anyone about the corruption of elections at the time. These prints were public and hugely popular; people would crowd around the windows of the London print shops to gossip and laugh at each one as it was issued. 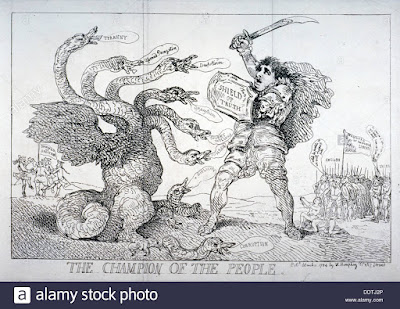 In 1784 Rowlandson produced both this pro-Fox print, The Champion of the People, and also the anti-Fox print below, The Covent Garden Night Mare - he was quite happy to work for whichever side would pay him more. In the first, Fox wears armour as he fights the Hydra (representing the King's attempt to influence Parliament), with a sword and 'shield of truth'. English, Irish and East Indian supporters stand and kneel and in the background a group of men representing foreign powers dance around the 'Standard of Sedition'. 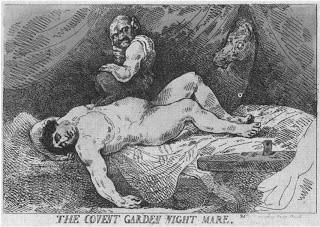 This is a parody of Fuseli's famous painting, The Nightmare, with the sleeping girl replaced by a naked Charles James Fox. A demon is sitting on top of him and a dice table beside him reminds viewers of his outrageous gambling.

Hogarth wrote that his aim was “ to compose pictures on canvas similar to representations on the stage. ... Let the figures in either pictures or prints be considered as players dressed either for the sublime – for genteel comedy, or farce – for high or low life. I have endeavored to treat my subjects as a dramatic writer. ...”. His four oil paintings ( later popular engravings), The Humours of an Election, illustrate an election in Oxfordshire in 1754 when the Whig candidate, the Duke of Marlborough, challenged the incumbent Tories. You can see the originals in John Soane’s Museum. In the first, An Election Entertainment, Tories are protesting outside a tavern where Whigs are hosting a wild drunken dinner for their supporters. The Mayor has eaten too many oysters and the Election Agent has been concussed by a brick thrown through the window. 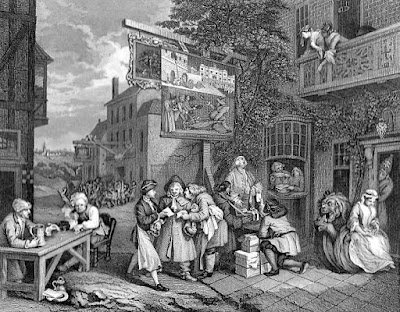 Here is the second, Canvassing for Votes. The inn is the headquarters of the Tory party, covered with signs satirizing the Whigs, for example: "Punch Candidate for Guzzeldown". The local Tory candidate is buying ribbons and jewels to give to two admiring girls on the balcony and at the bay window two men are guzzling the food they have been bribed with. In the centre a man is furtively taking bribes from two men at the same time while in the background a Tory mob is violently attacking the Whig headquarters.

The third of the Hogarth series, The Polling, shows voters declaring their support for the Whigs (orange) or Tories (blue). Agents from both sides are using unscrupulous tactics to increase their votes or challenge opposing voters. The Tories are bringing a mentally disabled man to vote and a dying man is being carried in behind him. In the background a woman in a carriage with a broken axle is a symbol of Britannia. 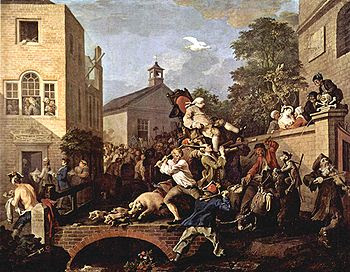 Here is the fourth of Hogarth’s great series, Chairing the Member. In a traditional ceremony, the victorious Tory candidate is being carried through the streets on a chair, led by a blind and ragged fiddler and surrounded by a disreputable crowd. The new MP is about to be dropped because one of the men carrying him has has just been accidentally hit on the head by a rural labourer who is fighting a Whig supporter, an old sailor with a bear. Frightened pigs run across the scene (the gadarene swine) and dishes of food are being carried into an elegant house where victory is being celebrated.

I’m going to finish with this image by James Gillray, my favourite of all those wonderful eighteenth century satirists. In Election Troops, Bringing in Their Accounts, his 1788 hand-coloured etching, Gillray shows us Pitt’s “troops” marching on the “Treasury”. Pitt, embarrassed, disowns them: "I know nothing of you my Friends, Lord H------d pays all the expences himself - Hush! Hush! go to the back-Door in Great George Street under the Rose!" Pitt is handed the bill “For Puffs & Squibs and for abusing opposition.” A ragged newsboy holds a newspaper, The Star , and another bill for bribing “ Ballad Singers & Grub Street Writers.” Next to him a publican holds out yet another bill “For Eating & Drink[ing] for Jack Ass Boys.” Behind them three Foot Guards demand payment “For the attack in Bow Street.” One of them holds a bayonet dripping with blood. A ragged cobbler holds out yet another bill “For Voting three times” and next to him a female ballad-singer demands payment “For Singing Ballads at 5 Shill pr Day.” A sailor with a bludgeon holds out yet another paper: “For kicking up a Riot”.... you begin to see how it could cost a hundred thousand to acquire a seat in parliament. 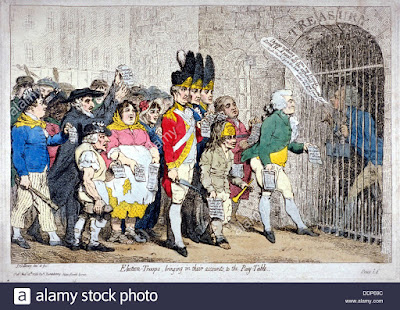 I can't help thinking of the Georgian era Blackadder episode in which Blackadder's dull servant Baldrick is elected to Parliament via a rotten borough and the "voter" "accidentally cutting his throat while shaving". :-)

We have compulsory voting here in Australia. Too many people worked too hard for the vote to become universal for people to waste their votes because "they're all the same, aren't they?" You can't, of course, be forced to vote directly, but you can damned well turn up. And when you turn up, more often than not, you might as well vote.

We should have compulsory voting here too, I reckon! Great blog, Miranda! I was thinking about Middlemarch, which, though later, shows something of corrupt elections, and also Eliot's 'Felix Holt'. In a way, though, our electoral system is bedevilled by the inheritance of those times- first past the post was fine when the member's job was to represent a handful of privileged voters. Not so good for a modern democracy..

Yes, I agree that compulsory voting is a good idea. Also, we desperately need PR. How about a written constitution and a 21st century Reform Act?

A written constitution would be an excellent thing, with rules laid down about referenda for a start!

Yes - to remind people that they don't have to be binding.

After doing some online research, I got my first e-cig kit at VaporFi.