On not being a geography girl Sheena Wilkinson

Here’s another book to show you. It’s not old, and it’s not really about history, except in the way that all geography is sort of about history. I wish I had learned that sooner. 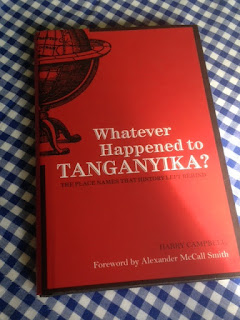 1981. I was in first form, eager in plaits and pinafore. But not – ugh! – about geography. It hovered too close to science for comfort, and we seemed to spend the whole year drawing cross-sections of sedimentary rocks. I had thought geography would be about learning about people in other countries, just as history was about learning about people in different times. I didn’t hate it as I hated science; it was just dull.

By the time we got on to doing maps, I had switched off from Geography. A great pity: as an adult I like maps, but as a child I saw the map of the world as something just to learn for the exam. I hadn’t bothered to learn it. There was a clump of islands somewhere off the coast of South America (I did recognise that it was South America.) The Bahamas, I labelled them hopefully. The Falklands, I found out when we got our papers back. How silly, I thought. Who’s ever heard of them?

The map of the world just – was. Europe, with the big stretch of Yugoslavia and the huge looming mass labelled USSR.  This was how it was, and would be. 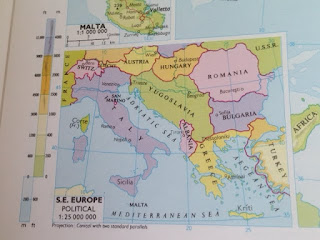 I know. I look back and wonder how an intelligent, curious child could have been so dim. After all, I myself lived in a country (state? province?) that had existed only since 1921 and whose validity was not accepted by all its citizens. And I knew that – remember I loved history.

I was charmed by old maps – loved visiting the reconstructed Victorian classroom in the Ulster Folk Museum and seeing its huge map of an Ireland not yet divided by the border, and bearing such forgotten names as King's County and Queen’s County. I think I must have thought that history was over: that the world wouldn’t go on changing its borders and its mind. Again, I look at what was happening around me in Northern Ireland and wonder at myself. 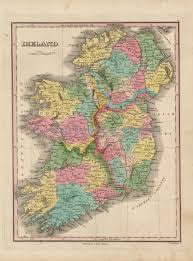 Not to mention what was happening elsewhere. When the Berlin wall came down I watched from my student bedsit.  I visited a friend in Czechoslovakia a few months before it split into two states. I loved seeing the ‘new’ European states emerge from behind the Iron Curtain – names familiar to me from O level history – now I knew where Serbia was. I look at my old atlas – printed in 1988 – and smile at how out-of-date it quickly became.

Right now I’m aware – and not in a good way – of living through history that seems to be moving at an alarming rate. Never again will I take borders and maps and the status quo for granted. 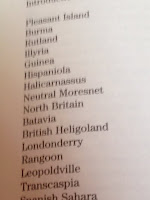 Back to the little book, Whatever Happened To Tanganyika? by Harry Campbell. Described as ‘nostalgic geography’ by Alexander McCall Smith, it  looks at places whose names have changed; places that have fallen off the map. There's a story about each one.

If this book had been written in the eighties, I might have come round to geography an awful lot sooner than I did.

I've found that there's nothing like having your children go to live at the ends of the earth to get you suddenly interested in geography! And in the history, culture, language, nationality etc of those places. But like you, Sheena, I found Geography at school utterly boring.

Snap, Ann! It's been an education. And thanks for the post, Sheena -

I enjoyed geography at school, but perhaps it was more interestingly taught. I am always interested how geography and history combine, and have this book on my tbr shelf, so now look forward to reading it. I recently finished 'Prisoners of Geography' on this subject, which you might also enjoy.