I live in a village up on the ear of the dog's head that is the Kingdom of Fife. 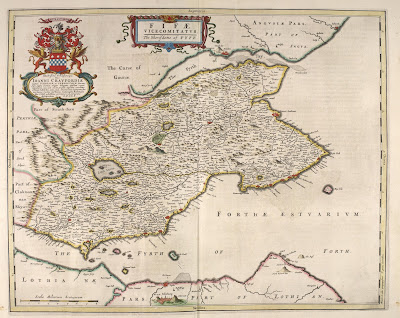 And the other day, I was wondering, as you do, why a particular street in my village has the particular name that it does, and I stumbled across an online resource - The Newport, Wormit and Forgan Archive.  And in this online resource I found this:

The word "mortcloth" will be known to many of you, but it was the first time I'd come across it.  So I was glad of the following explanation of the term:

Since there are no Burial Registers for Forgan Parish, the main documentary information about deaths and burials is that given by the Kirk Session records, principally in the form of ledger entries for the receipt of cash for the hire of the mortcloth. The mortcloth was a velvet funeral pall, bought and maintained by the Kirk Session and hired out for funerals. There were several different qualities of mortcloth, and a child's one.

Well, that was plenty interesting all on its own, but then I decided to have a browse of the entries ... and I was hooked.  There were pages and pages of them, and again and again, in a few words, the nugget of a story, the seed of a scene, just kept leaping out.

15 Jul 1664  Samfort Nairne, in Fyffe, depairted out of this life att his dwelling howse, and was interred the 17 of Jul. after, att his parish church, in the night season

and those words in the night season brought the scene to mind like a painting.  So why at night?  What was the story behind that?

and was utterly bewildered.

(Later on the same page, there was a quite huffy entry about administrative error (as perennial as ever), to wit:

18 Jun 1716  [i.e. 5 years later!]  This day the session called for a sight of their register and ... found that the clerk has neglected to insert the price of the fine velvet mortcloath that was bought by the session in October 1711 and so had not given the session credit for the same.

That one ran and ran.)

I read about a public collection of £4 on 17 Jul 1771 for the distress & destitute circumstances of Widow Scot and Widow Mackie who in a sudden & unexpected manner lost their husbands in the Passage betwixt Newport and Dundee.

The currents of the Tay are still wicked.

Between 14 Sept and 10 Nov. 1740, the child's version of the mortcloth was needed 6 times for 6 different families in quick succession.  What illness had happened?

And whose was the unnamed, unbaptized child buried on 9 June 1731?

I could go on and on - because I did! - but why not have a browse of your own?  Have a look out for the archives of your own village or town or city, or just spend some time with mine.  Entries of a few words will bring back the quiet dead.

Never did find out why that street was called that.  Never mind.  An archival wander for another day.

* so named because it was one of the ancient Pictish kingdoms.