I have wanted to visit Vienna for as long as I can remember. Everyone has a mental vision of the city, whether it be from watching 'The Third Man', reading 'The Hare with Amber Eyes,' or seeing Helen Mirren in 'Woman in Gold.' Everyone knows about Mozart, Klimt, Freud, Beethoven, and of course, Strauss. The strains of the Blue Danube waltz come into our heads. Midge Ure, singing 'O Vienna' perhaps...in any case, it's a place with a strong image.

Most people fly to Vienna but we (Judith Lennox and Helen Craig and I) took the train because I no longer take  planes anywhere. We rattled through the night in our couchettes through a landscape, which I watched rolling by for the last hour of our journey. It looked as peaceful and green as you could possibly imagine. I reflected, while munching my delicious breakfast rolls with butter and honey, that this ground was actually blood-soaked from a history of more than 400 years of constant conflict.

My reasons for wanting to go to Vienna were many, and one of them was definitely CAKES, but seriously, they can be boiled down to two main ones. The most important was wanting to see in the flesh, as it were, Rachel Whiteread's Holocaust Memorial. The second was to see in real life the paintings of Gustav Klimt. 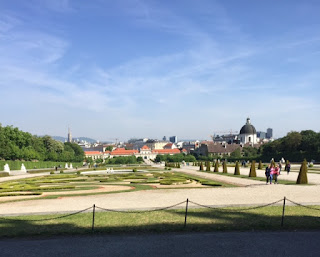 These, the Klimts, are housed in the splendid Belvedere Palace, above. Anyone wishing to know about Vienna's history ought to watch Simon Sebag Montefiore's three part tv programme about the city which must be still on  Iplayer. It is very wide-ranging and informative and full of good historical gossip.


We got there early. For about twenty minutes, the three of us were alone in the Klimt room, in which hang about fifteen paintings. The famous The Kiss is on a wall by itself. It is huge. It is not a bit like the myriad reproductions that you can buy. I found it beyond beautiful. I was quite knocked out. So much so that I couldn't even buy a postcard afterwards because every variation on the original fell so far short. I've tried to ask myself what it is about this picture that is so amazing. I have no idea. The gold? There is lots of that and it glimmers and glisters in an extraordinary way. The poses of the two figures? I don't have the artistic vocabulary to pick apart why it's so brilliant, but it is. For once, BRILLIANT is an appropriate and not a lazy word. The painting simply shines. And the emotional impact of Klimt's other portraits is striking. He clearly loved women and pays attention to their clothes, their jewels, their expressions. The effect is miraculous.

His landscapes are beautiful, too. His work (The Beethoven Frieze) in the Accession Gallery is also mind-blowing. What can I say? I went to Vienna with an image of what Klimt was like and this has been so enhanced that he has now moved high up the  list of artists whom I revere and love. 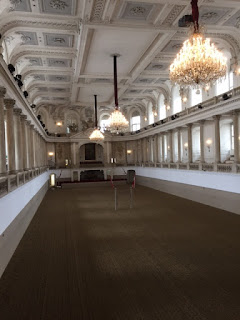 This, above, is the arena of the Spanish Riding School. We all three agreed that we wanted to see the beautiful Lippizaner white  horses and I booked tickets online well ahead of time. Disappointingly, the arena was overbooked and even though we arrived in good time for the beginning of the rehearsal, all the seats were already taken and we had to stand. We left after an hour or so. The horses were lovely, and it was fascinating to see the way they went through their paces but we were, I have to confess, a bit disappointed. We repaired to a fantastic cafe called Demel's and had a lovely cake each and by two o'clock we were back for a guided tour of the Spanish School Stables. And that was wonderful. 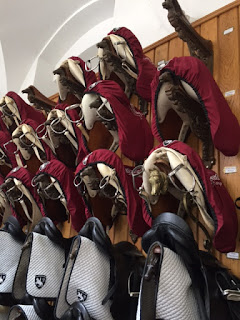 The horses who live in these stables are the best looked after horses I've ever seen. Above is a photo of some of their equipment, which is all in tip top condition. I've never been in a stable before but I assumed they would be quite smelly places. This one was practically fragrant. It was the cleanest place I've ever seen. The waste, we learned, gets picked up every hour.

The horses go on holiday every year to green pastures; they retire to the country after they've done their stint.  The Lippizaner horses were once used in the Cavalry. Now they are stars and part of the entertainment world, but looking at them close up they seemed very content. And we, the tourists, loved them.

Also living in the stables are two cats. Franz Joseph and Sisi. Of  course, called after the Emperor and his Empress, Elisabeth. Below is Franz Joseph in a photo taken by Helen Craig. He was the fattest cat I've ever seen- so fat that he could barely waddle across the courtyard to be petted by our party. We,  of course, thought he was lovely. 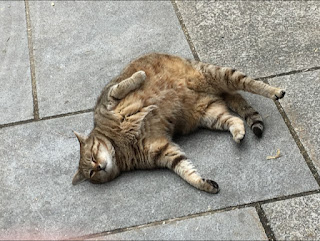 And so to the Rachel Whiteread Memorial.  In a place full of intimidatingly Baroque buildings, wide avenues and clean, green spaces, I found History very much weighing on me. It's hard when you've read about it and seen it on film, thought about it and pondered it over decades, not to imagine vividly what  went on in this place in the thirties and forties.  65,000 Austrian Jews were killed. It's very hard to think of the numbers but just bear in mind how devastated we are after the deaths of 22 young people. 65, 000. That's three Wembley Stadiums-full.

The memorial is situated in Judenplatz, which is the site of the ancient medieval synagogue. This was burned to the ground many hundreds of years ago.  This part of town is lovely, full of small shops and modest restaurants and a market place. There are churches nearby. Trees in bloom. And in the middle of it all, a cube of concrete. 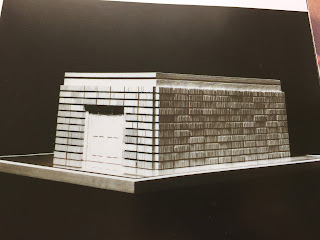 I'm going to quote from the booklet I bought there: "The double doors on the front of the memorial are also turned inwards and have no doorknobs. They suggest the possibility of coming and going, symbolising the destruction of intellectual life through the extermination of Austrian and European Jews." 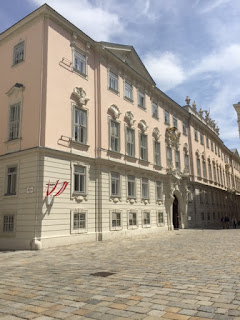 Above is a photo of one side of the square. Below is the inscription on the front of the memorial with a text in German, English and Hebrew.  All round the sides are carved the names of the death camps to which the Jews were taken. It's an incredibly moving place and a very apt memorial for the People of the Book: a library turned inwards.
The idea of having a memorial on this site was Simon Wiesenthal's and if I remember correctly, Rachel Whiteread had quite a struggle to get it made and installed. There was opposition in many quarters. The detail has escaped me from those days, and I don't feel up to researching it properly but I seem to recall trouble for the artist from all sides. But she won, and it's there and it's beautiful. And it isn't going anywhere any time soon. It looks as though it's there for centuries to come. 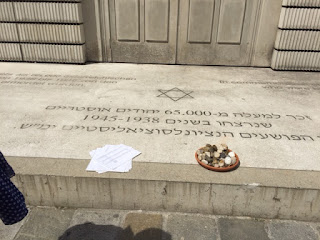 So moving, and so much brightness and shadow. Thank you!

I adore train trips across Europe, and planned to see Vienna last year but the connections meant I ended up in Munich which turned out to be amazing, but next time I will be going to Vienna! thank you for this taste.

I went to Vienna exactly this time and loved it - I think it's a most beautiful city, and probably my favourite one. Glad you loved it too!

I love being in Vienna. Thanks for giving me this virtual trip. The memorial is truly moving and it's so good to see it there. Have you seen the Berlin one, and the one in the Jewish museum there? I think the Jewish museum in Berlin is amazing and grief-striking because it shows the long history of Jewish-German culture and how creative that interweaving was, and then shows you the horror that arose. A warning to us all, especially in these times.

Sorry. Appalling writing in that comment. Still recovering from disturbed night on Thursday/Friday.