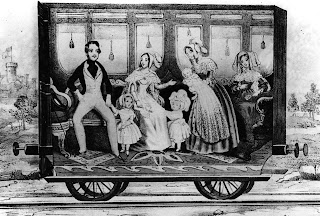 Exactly 175 years ago this month, Queen Victoria, who had then ruled Britain for five years, was the first British monarch ever to travel by train. The first railway line in Britain had been opened in 1830, between the cities of Liverpool and Manchester, when Victoria was 11 years old. Queen Victoria’s husband, Prince Albert of Saxe-Coburg, loved new inventions, and persuaded her to try this new form of transport.
On June 13, in 1842, the 23-year-old queen and her family took a horse-drawn carriage from Windsor Castle to Slough railway station, four miles away. There they boarded the royal saloon carriage, specially designed like a grand home. It had a padded silk ceiling, blue velvet sofas, matching silk curtains, fringed lampshades, fine mahogany wooden tables and thick carpets. The Times described it: "the fittings are upon a most elegant and magnificent scale, tastefully improved by bouquets of rare flowers arranged within the carriage."
The train was pulled by a locomotive engine powered by coal and steam, and took only 25 minutes to reach Paddington Station in West London. (Today the fastest journey from Slough to Paddington takes 14 minutes.) The engine was called Phlegethon of the Fire Fly class and had been built in 1840. A replica of the original Fire Fly is now at Didcot Railway Centre in Oxfordshire, just up the Great Western Line from Slough. On the footplate was Isambard Kingdom Brunel, the famous engineer who had designed Paddington station, the railway line from London to Slough and the world’s first iron ship to cross the Atlantic Ocean the SS Great Britain. The young queen wrote to her uncle, King Leopold of Belgium, that she was ‘quite charmed by this new way of travelling’. However, the Queen worried that the normal speed of 43 miles per hour would affect her health, so she insisted that her trains never went more than 30 miles per hour. Later a signal was fitted to the roof of the royal saloon in case the Queen wanted to tell the train driver to slow down.
The next day The Times newspaper reported: "Yesterday Her Majesty the Queen, for the first time, returned from her sojourn at Windsor Castle, accompanied by her illustrious consort, Prince Albert, Count Mensdorf, &c.by way of the Great Western Railway. The intention of Her Majesty to return to town by railroad was first intimated to the authorities at Paddington on Saturday afternoon, and in consequence preparations on an extensive scale were ordered to be made for the transit of the Royal pair from Slough to the Paddington terminus, which were carried into effect with the greatest secrecy."

Queen Victoria and her family of 11 children spent every summer holiday at Balmoral Castle, 500 miles north of London, near Aberdeen in Scotland. To travel by road from London to Scotland took several days by horse and carriage. But by train it took only one day, or a night sleeping on the train.
After Prince Albert died in 1861, Queen Victoria went even more often to Balmoral, always by train. The local railway station, Ballater, had a special platform long enough to accommodate the royal train made up of a locomotive, coal truck and up to eight carriages. Queen Victoria’s royal saloon carriage was the first in the world to have a lavatory. Another carriage had a fully-equipped kitchen and separate dining room. At night time, servants prepared the beds with fine linen sheets. Each sleeping compartment had hinged sinks that tilted into the panelled wooden walls. Next to each bed was a special hook to hang one’s watch, with a suede-leather pad to prevent the watch-glass from breaking as the train rattled over the points or swerved round corners. One carriage carried the servants – dressers, valets, footmen, maids and tutors. There were special carriages for the royal horses and another carriage for the royal luggage. The royal dogs went too, among them greyhounds, Skye terriers and pomeranians. Even the royal waiting room at Paddington station was designed like a palace with a marble fireplace, gold painted furniture and glass chandeliers.

Queen Victoria’s grandchildren ruled seven of the European monarchies, so dukes, princes and aristocracy often came from all over Europe to visit Balmoral Castle. The men wore Scottish kilts, and went shooting deer or grouse on the heather moors. Pony carts carried baskets of fine food and wine for picnic lunches, with special treats such as grapes grown in glass houses.
In 1897 Queen Victoria had been on the throne for sixty years. After a grand procession through London for her Diamond Jubilee, she went by royal train to Balmoral. For this special occasion, the engine trains were not their normal black: from London to Crewe they had been painted red; from Crew to Carlisle, near the Scottish border, they were white; and from there to Balmoral they were red – all the colours of the British flag! By then trains could travel from London to Edinburgh in less than ten hours.

Queen Victoria was 82 years old when she died in 1901 on the Isle of Wight. Her coffin was transported to the mainland by sea and then transferred onto a train to London. From Paddington in London it went by train to Windsor – the same journey she had made 61 years earlier. She was buried in the Royal Mausoleum in Windsor.

announced its Official Advertisement 2018 for Railway Junior Engineer. The Recruitment

Board is offering approx. 5620 Vacancies for RRB JE. It is a great opportunity for those who are interested

in the Railway Jobs.
DMRC (Delhi

more. The Department is providing over 1800 posts for the aspiring candidates. The online

Here for complete details regarding the DMRC Recruitment 2018.
Recently the RRB

has declared the vacancies for the Railway Assistant Station Master (ASM). An approx. of

year 2018-19 in the month of January. The examination will be conducted after one or two

months after the release of the notification. The RRB NTPC 2018 will recruit the candidates

for various vacant posts in Technical and Non-Technical Categories.
RRB has been

This information is magnificent. I understand and respect your clear-cut points. I am impressed with your writing style and how well you express your thoughts. RRB NOTIFICATION
RRB SYLLABUS

looking forward for more informative posts like this one.
parking luton airport