The Apothecary's rose, by Leslie Wilson 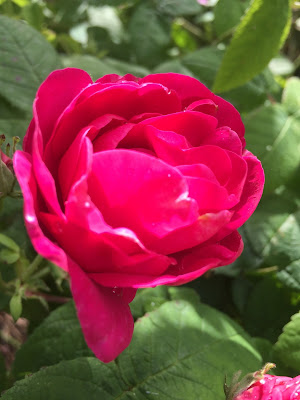 It is in flower in my garden now, and on warm days and evenings it fills the air with scent. It is a healthy, beautiful rose, flowering only once, but profusely, over a long period. Fly sometimes appear on it, but it seems to shrug them off, and it never gets black spot, though it's grown in shallow, poor topsoil (though I do mulch it with compost and horse manure).
It is rosa gallica officinalis, the apothecary's rose, and its history in these islands goes back to the Middle Ages. As its name implies, it was used in medicine. Nicholas Culpeper wrote of it: “Red roses cool, bind, strengthen both vital and animal virtue, restores such as are in consumptions, strengthen.' In 1597, Gerard's Herbal suggested that the petals of red roses 'should be ground with sugar and used to "strengthen the heart and take away the shaking and trembling thereof". 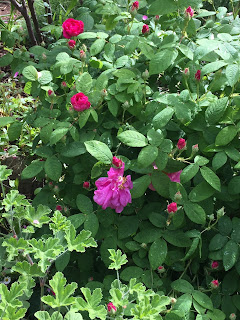 Its origins are in Central Asia, but it was grown in many countries in the ancient world -Persia, Egypt, Greece, Rome - not surprisingly, given its virtues and beauty, as well as its medicinal applications.It was used for medicinal purposes long before Gerard or Culpeper recorded its use in their herbals. It's also called the 'Provins Rose' because it was grown in this town in France, and the name 'rosa gallica' means 'the rose of Gaul', indicating its French origin; though Jenny Uglow, in her 'Little History of British Gardening', says the Romans first brought it to Britain and grew it in the gardens of their villas. The wild form is single; the ancient cultivar is semi-double, which means it is still of use to pollinators, and there is usually a  bumble-bee's eager rear end to be seen in the heart of many of the blooms throughout the day in my garden. 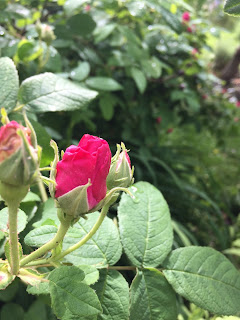 Shakespeare told the tale of the different contenders in the Wars of the Roses picking blooms to indicate which side they supported; the Yorkists picked white roses, and the Lancastrians red ones. The rosa galllica was the emblem of the House of Lancaster, as the rosa alba, the Great White Rose, was the emblem of Eleanor of Provence, and became part of the design of Edward I's Great Seal of State.I went to school in North Lancashire, and it was important, in the late 50s, that it was Red Rose country.It is still the official emblem of Lancashire. 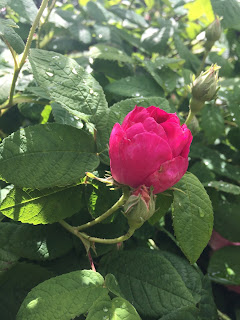 My daughter got married in the Walled Garden at Cowdray, a venue that had personal historical significance  as my great-grandparents lived in Midhurst, and my grandmother was born there. But of course, the Walled Garden was the garden of the now ruined castle, and when the original manor was built, I should think it extremely likely that rosa gallica was grown in the garden, though I didn't notice it in today's walled garden. It might be there. However, the petals were there that day, as I brought a bagful of them from our garden to throw over her and her new husband. One of the things that impressed the ancients about the gallica was the ability of the petals to retain the scent, even when dried, which made it the rose of choice for pot-pourri, and then of course there were the medicinal applications. I opened the bag, before we did the petal-throwing, and let privileged guests inhale the scent and be enraptured.


When I go out there and put my nose to the blooms, or just stand there and let the scent waft into my nostrils, I am just the latest of people who, over the centuries, have benefited from this rose. I love it that it's so sturdy and vigorous and not at all a challenge to grow. It's survived for a long time, so why wouldn't it be tough? 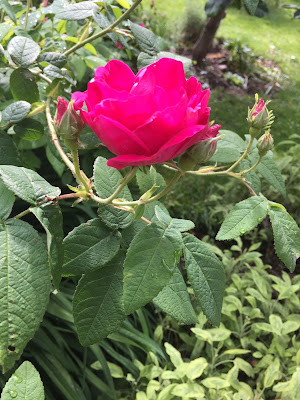