I often come at history by an oblique route - a painting, a novel, a piece of music. And so it was that I discovered King Roger of Sicily (the Second, though his father, also Roger, was never actually king).

It was 1975 and Sadlers Wells Opera was putting on a production of the rarely performed opera by Karol Szymanowski. We saw it then and again when it transferred to the English National Opera. This clip of Roxana's Song is taken from the far less satisfactory Royal Opera House production of 2015, which we also saw. (YouTube wasn't even a twinkle in anyone's eye in 1975).

You can hear the whole opera on YouTube now in an excellent 2003 recording conducted by Jacek Kaspszyk, a fellow countryman of the Polish composer.

This is ravishing music and we were bowled away when we first heard it over forty years ago. It was premièred in Warsaw in 1926 so the work was already nearly fifty years old when I came across it. But the plot, as I have now discovered, is a perfect essay in historical fiction. Szymanowski's King Roger is married to the beautiful Roxana, who persuades him not to persecute as a heretic a mysterious Shepherd who appears in their court.

She is entranced by him and soon leaves Roger, to follow the Shepherd and his adherents, but this isn't a typical opera plot about jealousy and betrayal.  Roger is jealous, of course - who wouldn't be if they heard their wife sing like that to a stranger? - but when he chases after Roxana, he himself falls under the spell of the Shepherd, who then undergoes an apotheosis into the god Dionysios.

Roxana and the Shepherd are teaching the king the lesson of joy and ecstasy, as if he had been a rather repressed sort of guy up until then. The whole opera is about the choice between the Apollonian and the Dionysian approach to life, as characterised by Nietzsche in The Birth of Tragedy. 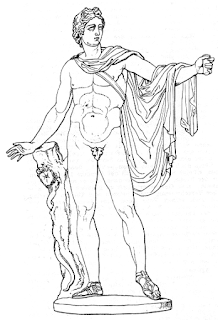 Nietzsche says everything that is part of the unique individuality of man or thing is Apollonian in character; all types of form or structure are Apollonian, since form serves to define or individualize that which is formed. Sculpture is the most Apollonian of the arts, since it relies entirely on form for its effect. Rational thought is also Apollonian since it is structured and makes distinctions. 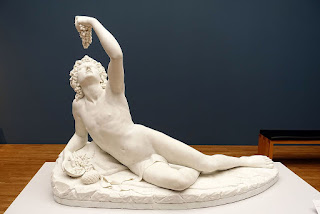 The Dionysian is directly opposed to the Apollonian. Drunkenness and madness are Dionysian because they break down  individual character; all forms of enthusiasm and ecstasy are Dionysian, for in such states people give up their individuality and submerges themselves in a greater whole: music is the most Dionysian of the arts, since it appeals directly to people's instinctive, chaotic emotions and not to their formally reasoning mind.

Dionysius' other name is Bacchus and the plot of the Polish opera is like Euripides' The Bacchae, but with a happy ending.

Not what operas are usually about, you'll agree!

I like works of art to be about real things and these ideas, together with the music of course, made King Roger an attractive proposition to me. Fast forward to last year and the Sicily exhibition at the British Museum. I went with a friend and came back raving about what I'd seen. Sicily had been on our bucket list for a long time and I said let's do it, let's book a visit now or we'll just end up going to Siena every year. (Nothing wrong with that).

So, we returned last week from seeing Palermo and Monreale, Taormina (in spite of G7) and Syracuse, Agrigento and Selinunte. My brain is a kaleidoscope of gold mosaics, ruined temples and amphitheatres, steep winding streets and the dominant presence of Mount Etna.

And now I know a lot more about King Roger.


He didn't have a wife called Roxana, that's for sure. His three successive wives were Elvira of Castile, Sibylla of Burgundy and Beatriz of Rethel. When Elvira died, he grieved so much and locked himself away, so that his subjects thought he had died too. He also apparently had many children by unknown mistresses too, so not the repressed old stick of Szymanowski's imagination.

But he was a truly remarkable ruler. His father had been Count of Sicily, a title inherited by Roger ll after his father and older brother Simon had both died. Roger was twelve at the time and his mother, Adelaide, acted as Regent. They were from the noble Norman family of Hauteville and young Roger eventually inherited all the family's possessions in Sicily and Apulia, being the only male descendant alive.

On Christmas Day 1130, Roger was crowned King of Sicily, though probably not by Christ as the mosaic in the church of the Martorana in Palermo suggests (first picture above). For the next ten years Roger was busy fighting in wars promoted by rival claimants to the Papacy, culminating in a failed invasion of the island by Pope Innocent ll. Acknowledging defeat, the Pope had to confirm Roger as king.

Roger developed the island's economy as a great Mediterranean trading post and introduced new coinage. Sicily also became the leading maritime power in the region. But, like the Medici in Florence three hundred years later, he also gathered into his court thinkers, scientists and artists. And he became famous for his tolerance - one might say multi-culturalism - hiring Greeks and Arabs, even an Englishman.

And he commissioned the lasting legacy of his reign: the churches at Monreale and Cefalu and the Palatine Chapel in the Palace of the Normans in Palermo.

If you think you don't know these works, look at this: 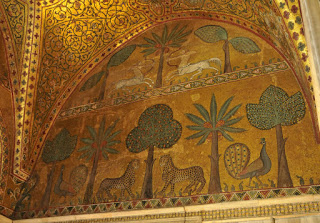 Familiar, isn't it? I came away from the BM exhibition with an Oyster card holder featuring these leopards calmly regarding each other under a tree. 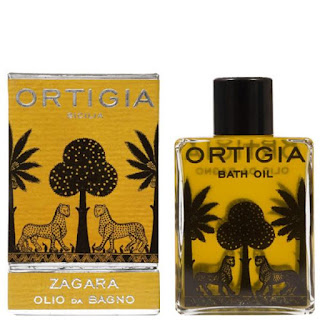 The image comes from King Roger's bedroom in the Norman palace, which I now realise had seen a lot more action than Szymanowski had led me to believe. (It's not in Ortigia, the peninsula at Syracuse, but Palermo).


And the Palatine Chapel: 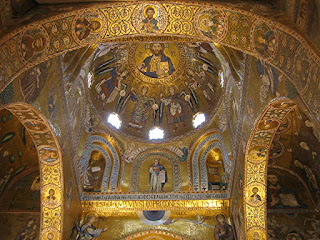 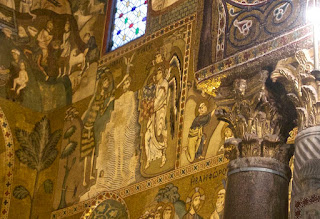 We had a traumatic time getting into the Palatine Chapel, where a service had over-run by 45 minutes and the Italian crowds waiting to get in were threatening to riot. There was loud booing of the clerics and the Knights of Malta involved. So by the time we got in, the crowds were intense and the feelings tense.

Nevertheless, it was like stepping inside a jewel box. It's quite small and completely covered in Byzantine technique mosaics, in which the tesserae enclose gold leaf or other materials between layers of glass. It lasts so much better than fresco, unless the little tiles fall off. The colour remains true to its origins nearly a millennium ago.

A very unwise decision was made in the 17th century to replace a window at the central apse with a awful mawkish Madonna with saints: 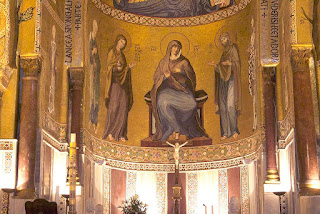 For me, that spoils the aesthetic of the Chapel.

Roger commissioned it soon after being crowned in 1130 and it was finished not long after his death in 1154.  Compare that with the 75 years taken to complete the mosaics in the Baptistery of Florence, which is a much smaller space. Roger's heirs added to the decoration of the chapel but the basic design is that of the mid-12th century ruler, who applied his own melting-pot approach to life by mixing eastern influences with western ecclesiastical tradition.

Monreale was begun in 1174 by William ll, Roger's grandson, very much copying his illustrious grandfather's principles. The one at Cefalu is much earlier: legend has it that King Roger pledged himself to build it after he was washed up safe on the sure after a terrible storm at sea. True to his word, he began building the church, later a cathedral, in 1131. It too has wonderful Byzantine mosaics, including an impressive Christ Pantocrator, but they were "in restauro" and we couldn't see them.

The tesserae had been falling  off the walls badly and the problem came to a head this Easter. We will just have to go back.

Roger wanted to be buried at Cefalu but his tomb was moved from there to the cathedral in Palermo in 1215: 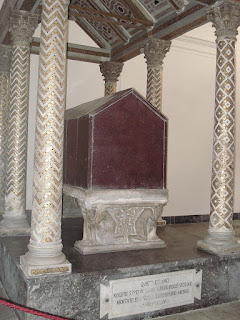 His widow, Beatriz, who was pregnant with their daughter Constance at the time of his death, she who later became queen of Sicily, is here depicted grieving at Roger's very plain tomb: 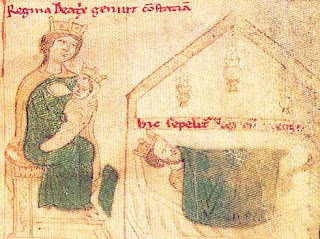 So, who was King Roger? A cerebral, remote husband in need of lessons in joy? A reformer? A harmoniser of cultures? A devoted husband? A womaniser? A warrior king? A patron of the arts?

You can take your pick. But what is clear to me is that there are many such historical figures that we don't really get to grips with until we meet them through some form of fiction.

Do you have any such favourites?

Interesting post and a lovely reminder of a wonderful holiday in Sicily a few years ago. Thank you.