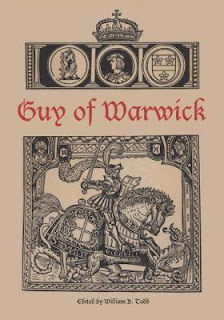 My last month's History Girls blog was about the gothic ruin,  Guy's Cliffe House, and the history and legend attached. One or two of the comments wanted to know more about Guy of Warwick, legendary knight and renowned hero who gave his name to Guy's Cliffe.

Guy of Warwick is one of those figures, like Robin Hood and King Arthur, whose existence is more legend than history. His story has been told and re-told over the centuries in early English 'Histories', Medieval Romances, chapbooks and ballads. There may be a kernel of history there. He was probably Anglo Saxon. His name is connected to the family of Wigod, Lord of Wallingford under Edward the Confessor and events re-counted place his adventures in the reign of King Athelstan. He is always firmly placed in Warwick and the surrounding area, just as Robin Hood is associated with Sherwood Forest, and I always think there must be some truth within these stories, or why would they endure?

Embellished, and expanded, Guy of Warwick has taken on the trappings of the times in which his story was told, or re-told. The Anglo Norman warrior, Gui de Warewic, first appears in the early thirteenth century. He was further transformed in the fourteenth century in a number of romances, adapted from the French.


Guy's 'History' would not look out of place as a plot line in Game of Thrones. It goes like this:

Guy was a humble cupbearer, a page at the court of the Earl of Warwick. He falls in love with the Earl's lovely daughter Felice but he is rejected as being too low born to win her hand. He has to go out and prove himself worthy of her. He embarks on a series of heroic tasks, ridding the country around of the Dun Cow, a monstrous beast twelve feet high and eighteen feet high. A rib bone (actually a whale bone) was on view for many years at Warwick Castle - a nice example of how the legend passes as history. The castle also holds Guy's two handed sword. The Dun Cow is remembered in place names like Stretton-on-Dunsmore and Dunchurch and there are many Dun Cow pubs in the area. Once he has despatched the Dun Cow, Guy takes on a giant boar that has been terrorising Coventry.

He returns to Felice after completing these superhuman tasks but it is not enough. To win her, he has to be famous, he has to gain renown. He leaves for Europe to prove himself as a knight in battle and combat, now more a figure of chivalric romance than a heroic beast slayer (although he does kill  dragon). After knightly adventures on the Continent, he returns triumphant. Felice marries him but this is not the end of Guy's story. Full of remorse for all the violence in his past, he decides to embark for Jerusalem disguised as a pilgrim, leaving a distraught wife who is only prevented from committing suicide by the thought of her unborn child. He wears a gold ring as his promise to return.

Guy reaches the Holy Land but on his return journey he is involved in more adventures, fighting as a champion and doing battle, righting wrongs and delivering justice for various people he meets on the road. He also discovers a magnificent sword (see above) hidden in a cave. He travels in disguise, refusing to reveal his name and is often underestimated in battle by his opponents, to their cost.  When he reaches England, he finds the country under threat from the Danes. Still disguised as a pilgrim, he goes to Winchester where King Athelstan and his court are praying for deliverance. The king has called for a knight to fight the Danes' huge African champion, Colbrond but no-one has come forward. The king is visited by an angel in a dream and told that his champion will be the first pilgrim to be at the North Gate of the city on the next day. That pilgrim is Guy. In an epic encounter, worthy of Game of Thrones, Guy defeats Colbrond. He then returns to Felice in Warwick. Still disguised as a pilgrim, he joins a group of poor men being fed at the castle gate. Unrecognised, he is invited to eat with her in the castle but leaves to visit a hermitage, on the nearby banks of the Avon, where he hopes to receive instruction.

When he finds that the hermit has died, he replaces him. On the point of death himself, he sends a message to  Felice in the form of the gold ring. She comes to him as he lies dying and the pair are re-united. Felice dies soon after and is buried alongside Guy.

And there ends the story. Told and re-told, more myth than history, it contains a wealth of different motifs: the mythic monsters of English folklore: the questing adventure, the dreams and miraculous discoveries, the battles and single combat of chivalric romance and the exile and return narrative,  the long separation, the disguise and discovery, common to so many myths and stories including the The Odyssey.

Guy of Warwick has been rather eclipsed by Arthur and the Matter of Britain but his story is full of romance and adventure. He is a very English hero and his name lives on, not least on that quintessential symbol of England, the pub sign. 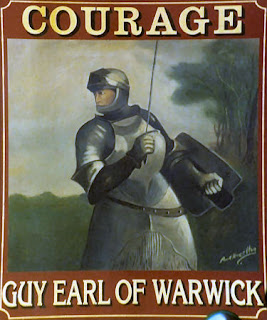 Wonderful! What a guy! (Oops. I honestly didn't mean to do that.)

Goodness, that's quite a story! I had heard the name among lists of legendary heroes of England, and the Dun Cow, but not the story itself. I can't quite picture a giant cow menacing the countryside, I think that might challenge even Ray Harryhausen's skills at creating scary monsters! It might, mind you, eat up all the grass and leave the other cattle and sheep hungry...

The Wizardry Of Jewish Women - The New Edition

I know! Odd, isn't it, that if it had been a bull, we wouldn't have any problems at all...