This time last week, during a holiday in Copenhagen, we decided to head north to Helsingør. It was only a short train-ride, and there was someone we were eager to meet - someone who has intrigued me (and a few zillion others) for many, many years. Yes: Helsingør's English name is Elsinore, and the enigmatic hero we were searching for was - Hamlet! 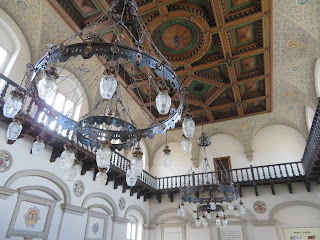 The station's palatial entrance hall set the scene. Clearly, we were on the right track. Outside, sea birds circled overhead, calling plaintively. We crossed the road into the town, alert for any glimpse of a slender, black-clad figure. Was that a swirl of his cloak, just disappearing at the end of this narrow cobbled street? 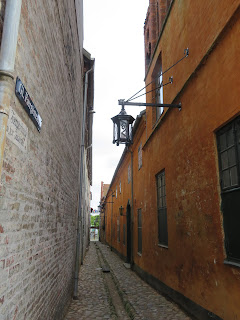 Was he one of the characters in this painting? Was this perhaps the ship in which his stepfather sent him off to England with his perfidious friends, Rosencrantz and Guildenstern? 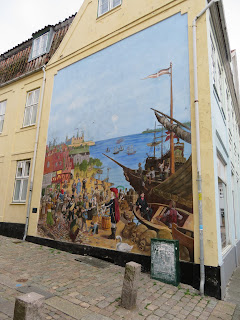 We reached the water's edge again - you are never far from it in Elsinore. Now here was a curious structure, made entirely of brightly coloured plastic cast-offs. Perhaps he was behind that...? 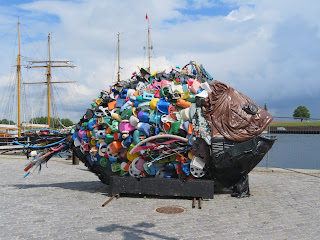 No. He wasn't. It probably struck the wrong mood - too cheerful, too silly. Then I spotted something promising - this dark figure, striding purposefully away. But no - too, too solid. 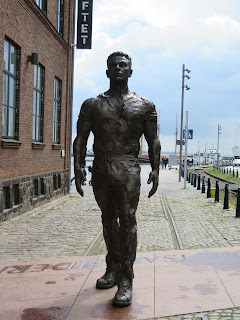 And then, across the water, almost looking as if it was floating, we saw it - the castle. Now it's known as Kronborg: Shakespeare just called it Elsinore. It stands guard over a narrow sound which divides Denmark from Sweden, and through which ships had to pass in order to access the Baltic: for centuries, the kings of Denmark built up their wealth by exacting tolls - the sound dues - from every passing ship. Elsinore then was prosperous and powerful, a famous royal court. At last - we were on the right track! We hastened towards the castle. Storm clouds gathered overhead: the wind pushed back at us and sudden heavy raindrops pelted us - but on we went. 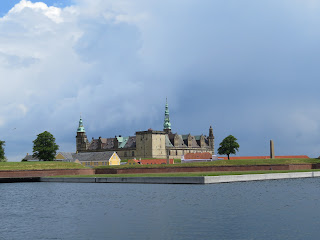 Soon we were in the royal apartments. We passed through a sitting room, the chancellery, the king's rooms - no sign. Then - we arrived at the queen's apartments. We couldn't help but notice the arras to the right of the fireplace, and hoped Polonius wasn't so foolish as to be hiding there. 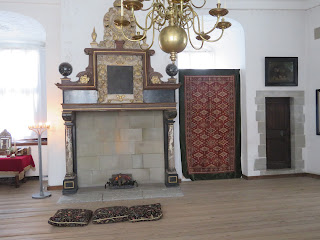 Suddenly, we heard shouts and the sound of clashing swords along a passageway. Hearts in mouths, we hurried along - and in a huge banqueting hall, there at last he was: Hamlet, Prince of Denmark! But had his sea of troubles finally overwhelmed him? Had he taken up arms to end them? Happily, no - it was just a practice bout with Horatio. Phew. 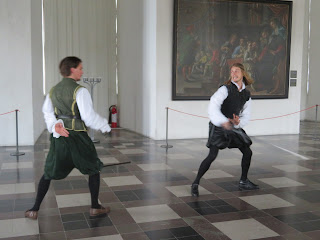 Our final glimpse of him was as he shared a tender moment with Ophelia - it would, we thought, be unkind to disturb them. I do hope that this time, it all works out for this charming young couple... 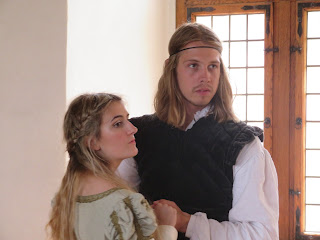 NB It's an interesting experience to encounter characters and scenes from the play as you walk through the castle. We saw a group of small children, wide-eyed with excitement as they exchanged a few words with 'Claudius', clad in blue and silver and smiling genially. But as well as these performances, Kronborg hosts a Shakespeare Festival each August, and many famous actors have appeared here over the years, including Laurence Olivier, Vivien Leigh, Michael Caine (as Horatio), Kenneth Branagh, Jude Law and many more.
Posted by Sue Purkiss at 02:00

Wow, a nice bunch of photos! That top photo is the RAILWAY STATION? Amazing. Glad you had such a good time.

The Wizardry Of Jewish Women - The New Edition

We went there last summer. Nice castle, but their local library is even better (and I was a jealous Brit seething that we don't have the same money put into ours..).

Love the not quite concealed Hamlet quotes, Sue.

SO glad you noticed, Penny!

Tee-hee! And I love that fish!

Everything cost an outrageous fortune, but I didn't see any slings and arrows. Quite a few skulls, though...

I just loved this virtual tour through Elsinore and its castle - and the not quite visible literary ghosts who hover thereabouts.