A House with History by Sheena Wilkinson

My house doesn’t have much history. It was built in 2002 and I’m the only person ever to have lived there. Of course the land it was built on has a history – everywhere does, but there’s nothing in the house itself except what I have brought to it.

Not so for my friend Claire Davis, whose Bow home announces its distinguished history proudly in the blue plaque by the front door. For this tall 19th century terraced house played an important role in women’s history. The early twentieth century East End of London was a hub of feminist activity, including a suffragette shop at Bromley-by-Bow, and a working women’s hostel on the Old Ford Road. But it was in Claire’s very house where, in 1914, Sylvia Pankhurst and her friend Nora Lyle-Smyth set up one of the most forward-looking and practical initiatives of them all, the East London Toy Factory and Babies’ Nursery. 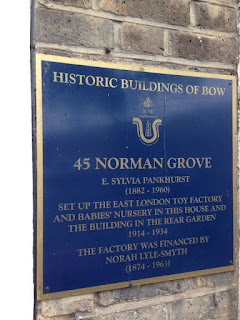 I’ve been a frequent visitor to the house since the late 1990s when Claire and her husband Frank bought it, and I’ve always assumed that the attractive brick building in the back garden was purpose-built for the toy factory. Not so, Claire tells me: the building was already there when Sylvia and Nora found the house. ‘It was quite common then to have small-scale factories in domestic settings.’ Of course the building made the premises perfect for Pankhurst’s plan. What made the factory special was that it included a workplace nursery, the first place to do so, some sources say. Sylvia Pankhurst’s feminism was of the sort which recognised the realities faced by working-class women, especially in wartime conditions.

The toys they made were high-end dolls and wooden and stuffed toys, sold to outlets such as Selfridge’s. The factory closed in 1934 when such luxury toys became too expensive to produce and not economically viable.

But you can find this out in a book or online. What I was really interested in what it feels like to live, and bring up four daughters, in a house with such a feminist history. Claire says she was always aware of the toy factory, because of the blue plaque. Local history walks often include a visit to the house, especially recently when interest in the suffrage movement has blossomed. I wondered if Claire’s own professional life, which has included supporting women through early parenthood, was directly influenced by the house, but she says it’s more of a happy coincidence. ‘Women are not always given choices,’ she explains, ‘and it’s empowering for them to be able to share information with other women.’

Happy coincidence or not, I think Sylvia Pankhurst would have approved. A couple more coincidences – Claire and her youngest daughter Agnes travelled to Ethiopia some years ago, to visit a friend. Ethiopia is, of course, where Sylvia retired to, and she is buried there. Claire and Agnes visited her grave. And I, browsing through a 1918 art magazine, found an advertisement for a painter/supervisor in the very factory I knew so well. Naturally I sent it to Claire and it’s framed and displayed in the hall, which makes me happy every time I visit.

I suppose we all add little bits of history to the places we go to, whether there’s a blue plaque or not.

That is a very special house, and satisfying to have a small part of its history, Sheena.

The post was also a useful reminder to find out more about the various London history tours, especially the walking ones. so any History Girl suggestions welcomed.

Hello. I met Rachel Kolsky when she bought tours to my doorstep. Her walking tours are brilliantly fascinating http://www.golondontours.com/go-womens-london/ (from Claire Davis)