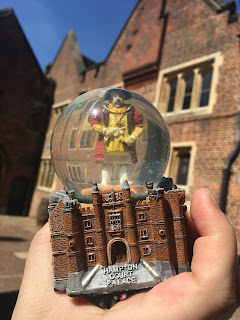 The kitchens at Hampton Court have re-opened and I had meatballs with ginger and cinnamon to celebrate. I wrote a while ago about my involvement scripting the sound landscape for Hampton Court Place Base court and how much fun I had doing it. Once that was complete we moved on to the kitchens and this time we got to use pictures as well as sound. I was hired by Matthew Rosier of Chomko Rosier again, and once Matt had done all the hard stuff like working out the initial concepts for each area we were working on, the budgets and where all the wires went, I got to join forces with him, James Bulley and Kyle Waters for the fun stuff. Researching, scripting and, as we filmed and recorded, a little light directing.

We were providing elements for five areas. The Carpenter’s Court was where food stuffs arrived throughout the day. The Board of the Greencloth was the administrative centre of the operation. A group of senior household officials gathered there each morning to make sure the needs of the Court were being met and accounted for, supported by clerks doing the counting and book keeping. They worked out what they would pay suppliers, what dishes would be served to whom and kept a close eye on all of the money flowing out of the palace, and all the food stuffs coming in.

In the Boiling House vast numbers of joints were seethed for the table in a giant copper. 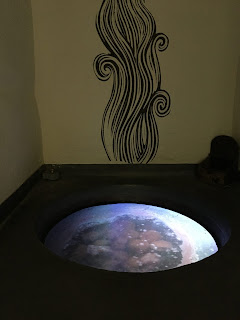 In the kitchens themselves, visitors can touch the chopping boards to see the cooks preparing the meat in front of them. The special speakers used for this bit mean you can feel the knife coming down to mince the meat and the vibration of the pestle and mortar as the spices are ground. 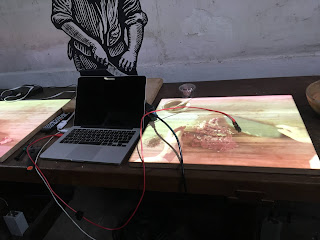 On the other side of the wall, invisible fires crackle and the pots seethe, spit and bubble as the cooks go to and fro.

My job was primarily getting into the detailed research with the guidance of the brilliant Hampton Court team, and coming up with the words. The research was much trickier than it was for Base Court - general gossip about historical figures of whom we know a fair amount is one thing, making sure you’re getting it right quoting the price of fish in 1538 is another. What does a 16th century cook say to himself as he’s making a pie mix, stirring his pottage or shredding herbs from the garden? It’s quite like novel writing in fact. You have to find those small very specific details to make a place and a time come alive, and then find a way to make them feel natural.


I do miss the collaborative elements of this sort of work. Novel writing is a megalomaniac’s paradise in many ways. It’s your world, and you get to run it as you see fit. Film and sound production is a team sport - especially when you are dealing with the complex demands of a three dimensional sound scape and visual field. The technical side of the projection mapping, speakers, media players, loops and channels flew over my head like a cool breeze, but I think the results are pretty impressive. There’s also a particular pleasure in hearing what you’ve written come alive in the voices of talented actors. We were very lucky in our Greencloth performers who handled very complicated scripts with aplomb. As we filmed I read in the lines of the clerks coming to hand over their accounts wearing an odd hat to get the shadows right and the fact I didn't put them off completely is a testament to their professionalism.


When we were clearing up after filming the preparation of the meat, one of my take home perks was the meatballs, so if you go to the kitchens and see that dish being made, rest assured it was delicious.

You lucky lady! It sounds like you had a great time... as will the visitors. I hope this is still going next time I’m visiting England!

Hope so! It's designed to last for years...