The history of Schengen

I am currently writing a children's book - a contemporary not an historical one - set in the Schengen area. My publisher is an interactive e-book publisher and is now European, so it seemed appropriate.

I picked a point in the Schengen area where the borders of three different countries meet. A three country or tri-point border is obviously far less common than a standard border and therefore so much more fun. This one is between Holland, Belgium and Germany.

To celebrate the open borders in Europe, a public park has been established and straddles all three countries, with viewing towers in Holland and Belgium. There is a maze, a cafe and a central point at this three-point border.

I have created a character from each of the three bordering countries, and together they have an adventure within the park. It was inspired by reading (I can't remember where) about how the local young people love to meet and mingle there, and enjoy their borderless existence. I thought this was inspiring at a time of hardening of borders and attitudes in the UK.

This set me wondering about the Schengen area. When did it come into existence? When did I first hear it mentioned? I know it wasn't here in the UK; it was in Denmark, and it wasn't so very long ago either. 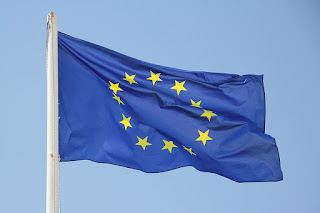 I wasn't aware that the Schengen agreement wasn't originally an official part of the EU. Although some member states of the EU have been working towards and hoping for more integration for many years, no agreement could be reached. Thus the Schengen Agreement was originally made on the 14th June 1985, between only five European nations - France, Germany, Belgium, Luxemburg and the Netherlands. It was signed at a small village called Schengen in southern Luxemburg.
Internal borders between seven countries were finally abolished in March 1995; the original five plus Spain and Portugal.
It wasn't until May 1999 that the Schengen area was finally incorporated into the legal framework of the EU by the Treaty of Amsterdam.
The Schengen area now comprises 26 states, four or which aren't EU members. Two EU states opted out - the UK and Ireland too, in order not to cause border problems with Northern Ireland.

So far, my international characters are having an exciting adventure, roaming between the three countries, hunting down international smugglers. One more chapter to go this week. I shall be sorry to leave the park and return to real life where borders feel all too real.

Posted by Marie-Louise Jensen at 01:12

Thanks. I've always wondered what Schengen means! But I still don't understand why our Chinese lodger on a 6 month visa, could only go to Morocco or Bulgaria from UK, and nowhere else in Europe.

You need a Schengen area visa and they are hard/expensive (I'm not sure which or why) for the Chinese to get. My Chinese lodger went to Turkey and Ireland a few years back.

Very interesting, and it sounds like a great book!