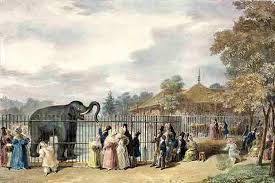 Recently I visited the zoo with my three little grandsons, whose favourite place it is. Felix, aged 22 months, is obsessed with octopuses and butterflies. I was struck by the generous space the animals are housed in now, and by this mission statement:

Over a million people a year visit the zoo and there are lots of imaginative educational programmes to interest children in biology.

When I was a child it was very different; I’m sure that many people who worked at the zoo then DID respect the animals but they were kept in cramped cages and seemed to exist for the amusement of human beings. I remember queuing up for rides on the elephant ( see above) and the camel, who presumably were not asked if they wanted to carry squealing children around on their backs. The highlight was the Chimpanzees’ Tea Party, when chimps dressed in human clothes sat down at a table and threw buns at each other while we all laughed at their uncivilised table manners.

The Zoological Society of London was founded by Sir Stamford Raffles in 1826, on a 5 acre site in the new Regent’s Park, which was then on the northernmost edge of London. It wasn’t the first zoo in Europe but, in England,  the only major public collections of exotic animals were the Exeter Change menagerie, in a filthy arcade on the Strand, and the mangy  assortment of animals at the Tower. Henry I created England's first 'zoo' in 1110, when he collected lions, tigers, porcupines and camels at Woodstock, in Oxfordshire. Later, this menagerie was moved to the Tower of London, where it remained for 600 years. 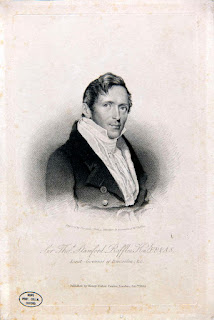 Raffles, of course, is most famous for founding Singapore. He was also a remarkable collector and scholar who enthusiastically researched the natural and cultural history, civilization and languages of the countries which are now Indonesia and Malaysia. Raffles himself died a few months after founding his zoo, aged only 45. His ambitions for the expansion of the British Empire were undoubtedly mixed up with this project to introduce other scholars to some of the Empire’s most exotic inhabitants. After Raffles’ death his project continued, supported by distinguished scientists, aristocrats, and clergymen.


Decimus Burton was appointed to lay out the grounds and design houses for the animals, many of them very beautiful, as can be seen from these designs: 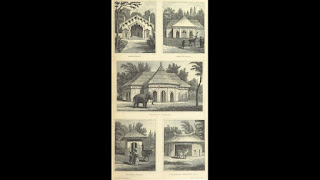 The Literary Gazette wondered “how the inhabitants of the Regent’s Park will like the lions, leopard and linxes [sic] so near their neighbourhood.” They didn’t, and the objections of people living in the grand houses John Nash had recently built in and around the park delayed the construction of the new buildings. The zoo finally opened in 1828 and, for the first twenty years, only Fellows, and those who could obtain permission from them, were allowed access. Sadly, many of the first generation of exotic animals died of the cold because it was not understood that they had to be kept in carefully regulated temperatures.

Charles Darwin visited while he was writing The Origin of Species and was fascinated by an orangutan, Jenny, the first ape he had ever seen: “The keeper showed her an apple, but would not give it her, whereupon she threw herself on her back, kicked & cried, precisely like a naughty child. - She then looked very sulky & after two or three fits of pashion [sic], the keeper said, 'Jenny if you will stop bawling & be a good girl, I will give you the apple.' - She certainly understood every word of his, &, though like a child, she had great work to stop whining, she at last succeeded, & then got the apple, with which she jumped into an arm chair & began eating it, with the most contented countenance.” This experience probably contributed to his famous conclusion that: “Man in his arrogance thinks himself a great work, worthy of the interposition of a deity. More humble, and I believe truer, to consider him created from animals.”

When the zoo did open to the public, for a shilling, it rapidly became a much loved part of London life. A giraffe was an early star and so was Jumbo, an African bull elephant, who even entered the dictionary. A hippopotamus, Obaysch, arrived, given by the Abbas Pasha of Egypt, in exchange for four brace of deer hounds. In 1850 Punch published The Diary of the Hippopotamus:

As many of our country readers naturally feel anxious to know how the Hippopotamus passes his time in a strange land, where he is so far away from home and all his relations, we have gone to the expense of procuring the following particulars, which are now printed for the first time.... HIP, HIP, HIP, FOR THE HIPPOPOTAMUS.

EVERYBODY is still running towards the Regent's Park, for the purpose of passing half an hour with the Hippopotamus. The animal itself repays public curiosity with a yawn of indifference, or throws cold water on the ardour of his visitors, by suddenly plunging into his bath, and splashing every one within five yards of him.

The O.K. thing on Sunday is the walking in the Zoo. 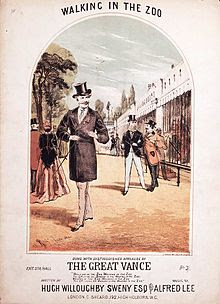 The Fellows of the Zoological Society of London disapproved of this undignified new slang word but it caught on, anyway.

An unusually tame female black bear called Winnie lived at London Zoo from 1914, when she was left there by Canadian soldiers on their way to fight in France, until her death in 1934. A A Milne and his son Christopher Robin were so charmed by her that Milne changed Pooh’s name to Winnie-the-Pooh.

London Zoo seems to have adapted admirably to changing ideas about animal rights, although it can of course be argued that zoos shouldn’t exist. The National Zoo in Washington, for instance, now prefers to call itself a biopark. Many people believe that wild animals should remain in their natural habitat and shouldn’t be made to live in captivity at all. But while it’s here some  of us will continue to enjoy our visits.

Very interesting and entertaining. I was researching the Exeter Exchange for my own novel: it sounds vile, and what I saw at the Tower was equally unpleasant. (The display about the Tower ‘Wild Beasts’. The Zoological Society was clearly an enormous advance, even with chimps tea parties.

I remember when a Golden Eagle escaped from London Zoo in about 1964.I was playing a game of hockey with my school nearby and we all ran off the pitch to admire it. Our games mistress was not pleased.