In memory of Beth Chatto, who died earlier this week, aged 94. Apparently she believed that the secret of successful gardening is 'the right plant in the right place'. It's taken me a long time and a lot of failures, but I've eventually come to the same conclusion!

Not so very long ago, museums used to be places full of glass display cases, crammed with dusty artefacts: you would wander past, peering at closely typed labels, wondering what it was you were supposed to be looking at and why. I remember as a child going to visit Wollaton Hall near Nottingham: we used to take a picnic and walk through the beautiful park, admiring the deer. And we would go into the natural history museum, which was full of cases containing miniature landscapes, against which were set stuffed animals and birds, which gazed defiantly out at us.

And much more recently than that, twelve or so years ago, I visited the Ashmolean Museum - Britain's oldest museum -  in Oxford (more of the Ashmolean later). I was researching Alfred the Great, and I knew the Ashmolean had the Alfred Jewel, an object exquisitely made of gold and enamel at the behest of Alfred himself, and found centuries later in a Somerset field. It took some finding. Eventually I found it in a case jumbled up with quantities of other artefacts. Not long after that, the museum was given a stunning makeover, and now the Alfred Jewel is at its centre, beautifully displayed in solitary splendour.

Museums have changed enormously over the last ten or twenty years. Now, thanks to innovative design and a realisation that people want to be told the stories behind what they are looking at, museums are not just informative places - they're exciting and creative.


Because of all that, they are not necessarily peaceful places. But recently, I visited one that is just that: it's a haven of peace in a busy, noisy world. It's the Garden Museum, on the south bank of the Thames, near Lambeth Bridge. So it's in the centre of one of the busiest cities in the world, with traffic and tourists hurtling past. And yet there it is, a small green oasis of calm and birdsong. Perhaps it's partly because the building which houses it was formerly a church. The museum was set up by Rosemary Nicholson in 1977, to preserve the building of the Church of St Mary's-at-Lambeth - and the tomb of the Tradescants, father and son, 17th century plant hunters. 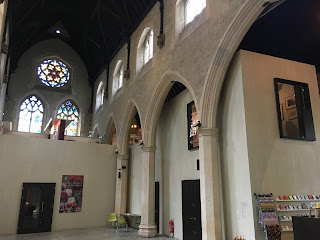 And thank heavens she did. The building has been beautifully re-purposed. It still has its stained-glass windows and pale, soaring stone arches. But it also contains eclectic displays concerning the history, art and design of gardens in Britain. It has special exhibitions, too - the one at the moment concerns a 20th century painter, gardener and plant hunter called Cedric Morris - and you can watch a series of short films about significant gardeners. I watched two, about Penelope Hobhouse and Beth Chatto; it was like wandering round their gardens with them as they reminisced, with extraordinary modesty, about their lives and work.


And there's a small exhibition of objects from the Tradescants' Ark. This had the modest intention of representing 'the nature, art, religions and ways of life of all nations on earth'. The Tradescants, both gardeners to kings, travelled widely plant hunting and collecting all kinds of curios and interesting objects, and the collection was added to by their friends. The Ark was open to anyone who could pay the sixpenny entrance fee.

The Tradescants' neighbour was one Isaac Ashmole, a lawyer, astrologer and scholar who was a great admirer of the Ark. So much so that he somehow managed to persuade the younger Tradescant to leave the contents of the Ark to him. John's widow, Hester, contested the legacy, but to no avail: Ashmole got everything, even portraits of John and his father; this miniature is the only one Hester managed to keep. Everything else was shipped off to Oxford - where it formed the basis of the Ashmolean Museum. The small exhibition in the Garden Museum consists of objects loaned from the Ashmolean. It includes the portrait of the elder John Tradescant; a bizarre object called a 'Vegetable Lamb', which was believed to grow in southern Russia and was said to grow on a stalk, and eat all the vegetation around it; a statue of St Fiacre, patron saint of gardeners (apparently God granted him a miraculous staff, whose tip would topple trees and uproot bushes); a wooden clog from the Island of Johana in the Indian Ocean; beads; Roman coins; reindeer antlers; and so on.

On the first floor are displays about the history of gardening in Britain; here are a few snippets which caught my eye:
Beyond the museum is a courtyard where there is relaxed green planting set around two tombs. One belongs to the Tradescants, and has scenes from their travels engraved on its sides: the other belongs to a certain William Bligh. Bligh was a member of Captain Cook's crew, and was an associate of Joseph Banks, the first director of Kew and godfather of many planthunting expeditions. and many other enterprises too. He was also the Captain Bligh of the mutiny on the Bounty, which, as you can see from the inscription on his tomb, he survived, to die at home in Lambeth at the age of 64.


There's a pleasant cafe, a soothing green garden, and a church tower which apparently has wonderful views over London - I quite forgot to go up and see for myself: something for next time.


(NB Philippa Gregory has written two novels about the Tradescants, Earthly Joys and Virgin Earth, and I've written a novel for children about planthunters, called Jack Fortune and the Search for the Hidden Valley.)

Thanks for this lovely post, Sue. I've always wanted to go to the Garden Museum - I will definitely visit now!

I loved this post. -- Almost sorry to hear that the Alfred jewel is now displayed like the beautiful, precious thing it is. I quite enjoyed stumbling across it in a small, waist-high display case and being able to lean over it and really examine it.

Thanks Sue - this brings back memories of a pleasant morning and lunchtime I spent there some years ago, when meeting an old school friend prior to going to the theatre to celebrate having known each other for 50 years!

Thanks for this, Sue - definitely going on the London must-visit list!

Thanks, all. It's just amazing how peaceful it is, when it's surrounded by busy-ness.

Certainly a place for a next time - or even a first time for me. I've known the Museum existed but it may have been closed for a while, bu this post has definitely encouraged me to go when I'm next visiting London. Thanks - and Mr Ashmole was not a nice, trustworthy or generous man.