THE DEVIL IS IN THE DETAIL: By Elizabeth Chadwick.

One of the joys of writing historical fiction for me is the detective work of  discovering the lives of the characters who populate my novels.  Although it's fiction, I want to get as close to their personalities and their daily experiences as possible.

At the outset of any project I always ask myself: 'Who are you? What are you really like?  What can you tell me that you have never told anyone before?' (Present tense intentional).   And then I begin sifting through the primary and secondary source evidence, and pursuing my time travel delvings with my friend and very talented psychic, Alison King.  Here's an url to an earlier piece about how it works in tandem with conventional historical resources.
Alternative research: the psychic strand

When diving under the surface I often come across facts and details that change the course of my work and it fascinates me how these items make a difference to my creative choices. If I hadn't come discovered these facts, I would have written scenes that could never  happen, or that might have made a different impact on history.  I'm sure I have made many unwitting 'it didn't happen' choices because there is only so much research a writer can do. Of course it all boils down to that blend of story and fact combining to create the marvelous genre of historical fiction.  The facts we use and don't use, that we know and don't know,  are the building blocks of our personal experience and journey. 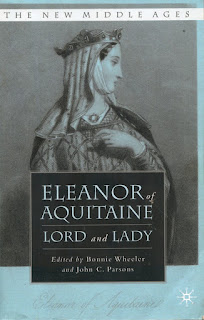 When writing about Eleanor of Aquitaine in THE SUMMER QUEEN,  most of her biographies said she was born in 1122, but then I came across newer research which put her more likely birth date at 1124. (Andrew Lewis's article on the birth date of King John in Eleanor of Aquitaine Lord and Lady, edited by John Parsons and Bonnie Wheeler)  You might say two years doesn't make a difference, but it does when your character is married either at 13 or 15.  Two years in this case is the distance between just out of childhood, and established teenager and the description of one biographer of Eleanor as being 'saucy and hot-blooded' (without any evidence I have to say) at her marriage, immediately sounds a very wrong note.  My choice was to go with the new findings and write Eleanor as being married at 13, just out of childhood and at that stage a pawn of powerful middle-aged men, rather than at 15 and a demanding little madam. No other author of historical fiction had tackled Eleanor from the angle of marriage at 13 and it made a huge difference.

There was the matter too of her illegitimate brother Joscelin.  If I was going to write about her life, I had to know about him because several biographers said that she had given him land in Sussex when she was queen of England. He must have been important to her.   I subsequently discovered that no such brother existed and it was a misreading of the primary sources by her biographers.  I wrote about it for The History Girls here. Eleanor of Aquitaine and the brother who never was   Needless to say, I omitted his presence from the novels.

At the moment I am busy on the third draft of THE IRISH PRINCESS, the story of Aoife Machmurchada, daughter of King Diarmait of Leinster who married Richard de Clare, lord of Striguil (Chepstow), her father having bestowed her marriage in payment for de Clare's help in regaining Diarmait's lost lands.  Richard de Clare is known to history as 'Strongbow'  as was his father. Once again, digging under the surface, delving into other histories and talking to excellent castle historian Paul Martin Remfrey, a detective himself par excellence, I now know that in all likelihood, 'Strongbow' was never called by that title in his lifetime. The elaborate stories about how he came by the name (either by leading a contingent of skilled archers, or being able to pull a great warbow that no one else could) is all so much myth and legend.  The real reason he became known in future centuries as 'Strongbow' was that the scribes who wrote 'Striguil', the caput of his earldom were idiosyncratic in their spelling and handwriting and the word became mangled and changed in the Chinese whispers of time.
I still have a warbow in my story as a nod to the legend, but I have omitted calling Richard de Clare 'Strongbow'  because what is known cannot now be unknown.
While researching the same novel, I have also been intrigued to find that Aoife, Richard de Clare's wife, who I had earlier thought had lived much of her life in Ireland, now seems to have dwelt mostly in England and Wales during her widowhood.  Her purported death date of 1189 has been pushed back to 1204, (circumstantially but convincingly enough for me), and I have a whole new set of possibilities with which to play!).

I'm slowly gearing up to prepare the next project.  I wonder what I'll discover next time around!

Elizabeth Chadwick's most recent work, TEMPLAR SILKS, details William Marshal's journey to the Holy Land in the course of which Elizabeth discovered all manner of research details she had never come across before! 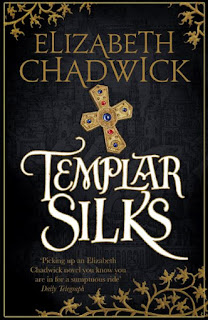