Fake or fortune (or perhaps both)

Although I'm fascinated by the Second World War and write novels set in that period (1), I also have a Master of Philosophy degree in Medieval and Renaissance Studies, and that's why I am sitting in Harrison Stinson Hall at the University of Michigan, Kalamazoo. I'm at the 53rd International Congress of Medieval Studies, munching a banana and free chocolate.

The chocolate came from my friend Lisa Fagin Davis (2), and is a gift from the Medieval Academy of America. I have just returned from a stall in the merchandising section of the conference, where a charming man is selling pages of medieval manuscripts. Lisa sent me over there and I asked to see the work she thought might interest me.

Here it is in all its glory: 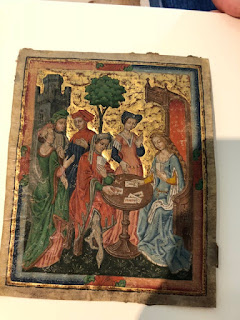 It was lovely to hold and view up close. It is gouache and gold with traces of pencil on vellum, and from a series called 'The Hunting Party'. The colours are bright, the picture beautifully rendered, and the illumination glorious. It can be yours for a mere few thousand.

The painting is by an unidentified artist who worked in the nineteenth century known as 'The Spanish Forger' (although it is likely that he actually was French).

The Spanish Forger was spectacularly successful in selling his work as original medieval illuminations. Nowadays they pop up in collections all over the world.

Here is one of his pieces in the University of Sydney:

A glorious piece in the Metropolitan Museum of Art in New York: 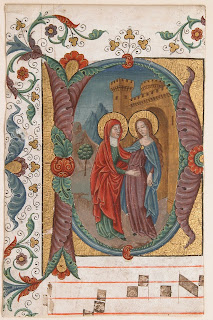 And this one's at the University of Pennsylvania:

His works fooled many experts and art collectors. No one suspected forgery until 1930 when the curator of the Pierpont Morgan Library, Bella da Costa Green (who will one day be the subject of a blog of her own), refused to support the purchase of the lovely piece below for the Metropolitan Museum in New York.

The panel was later tested using neutron activation analysis and it was discovered that the green pigment was copper arsenite, otherwise known as Paris Green, a paint pigment not available before 1814. Bella was absolutely correct. There was no way the painting could be authentic, although it had been painted on medieval vellum.

And that is how he got away with it for so long. The Spanish Forger (as Bella da Costa Green dubbed him) painted his works on the vellum or parchment leaves of genuine medieval books, by painting in blank margins or scraping off original writing. He also 'completed' unfinished miniatures or added miniature paintings to illustrate genuine medieval choir books. He knew full well that illustrated leaves were much more valuable than plain ones and probably made a fortune.

Lisa told me that several pointers now clearly give him away. As she put it, 'backs and boobs', but also gold, head tilt and facial expressions.

Backs: If you look at the back of the paintings you can sometimes actually see where he has scraped away the original writing. In the piece I saw (pictured above) at the back of the painting faint lines are visible, from its original purpose as a choir book. This is a lovely picture of two noble ladies and a gentleman playing chess. The back (dorse) of the page tells a different story. It's a snippet of liturgy and never would have been in the same book as such a secular scene.

Boobs: He appears to have been rather obsessed with large-breasted women in low-cut gowns. The sort of cleavage he painted is just 'wrong' in an authentic medieval work.

Gold: Lisa tells me that the Spanish Forger painted his miniatures in the wrong order, by applying the colour before the gold leaf. In medieval pictures gold was always applied first and then burnished. Only then was the illustration added, so that examples exist of unfinished miniatures where the only thing that has been applied is the gold. In the Spanish Forger's work, the gold sometimes overlaps the colour and that's absolutely wrong!


Head tilt: Many of the Spanish Forger's individuals have a tilt to their head that would not have been seen in medieval paintings.

Expression: his subjects tend to look a bit too 'sweet', cloying rather than pious. Here is an original fifteenth century artwork from the University of Pennsylvania collection. The Virgin's expression is pious and not cloyingly sweet:

Update!!! We bought it! We are now the proud owners of a pricey fake. Isn't it beautiful: 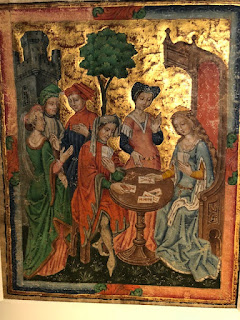 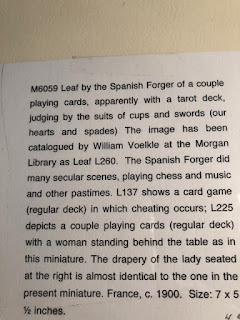 (1) See https://deborahburrows.com.au/. My latest novel, Ambulance Girls Under Fire, is out in e-book form and the trade paperback is available in Aust/NZ. The novel will be published in the UK in July 2018.

(2) Lisa's blog on the Spanish Forger may be found here:
https://manuscriptroadtrip.wordpress.com/2014/01/18/manuscript-road-trip-the-spanish-forger/

Totally fascinating! Loved reading about the Spanish forger. Shall look at medieval paintings too with new eyes now. Thank you!