The Delivery of Letters - a novelist's dilemma

Every time I write a book  there is nearly always a point in the plot where a letter or message needs to be sent, and I am obliged to calculate how long it will take for the letter to reach its destination. And of course someone in the novel is waiting for the reply, which doubles how much fictional time the reader has to wait to find out the outcome. This calculation nearly always involves the speed of a horse and rider, the distance, the state of the road, and the reliability of the postal service. Nowadays, mail is instant - a few seconds and it's on your screen. In the medieval Chronicle of Croyland, (named for its place of origin, the Benedictine Abbey of Croyland or Crowland, in Lincolnshire, England) we read:


' Richard III followed the practice which had been recently introduced by King Edward in the time of the last war with Scotland, of appointing a single horseman for every twenty miles, by means of whom travelling with the utmost speed and not passing their respective limits, news was able to be carried by letter from hand to hand 200 miles within two days.'

This was the beginning of the despatch rider, at first a temporary measure to take mail of national urgency, and later a method of sending mail along organised routes.Under this new 'stage' system, a fresh horse was available every twenty miles, and so a  hundred miles could be covered in a day.

In Tudor times as the court moved from place to place, so despatch routes would be organized between London and the designated palace. The earliest mention of a Master of the Posts is in the King's Book of Payments where a payment of £100 was authorised for Brian Tuke to take on the role February 1512. Tuke was the secretary of Henry VIII and Cardinal Wolsey and was asked to look into the King's Posts. He sent a memorandum to Thomas Cromwell which stated that only the London to Dover route was a regular post, and the rest a hotch-potch of disorganisation, with people pulling carthorses from the fields if a message was urgent.


Because of this shortcoming, the idea of always having a horse in readiness became essential. So the postmaster was born, a man who would have a horse always available for despatches (and of course he could hire these horses out to private persons too.) On major routes now there would be a postmaster appointed in each town, and they were instructed to have the sign of a posthorn hanging on the door, for the couriers to be able to find the source of their next mount.

For this reason, we often still see the image of a posthorn on our mailboxes, stamps, and on taverns or pubs that were former staging posts. Some are still called the Post Horn Inn, the Horn or the Bugle Horn. 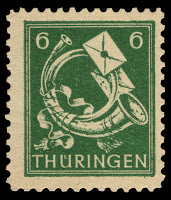 By Elizabeth's reign, entrepreneurs had begun to set up rival companies, until a proclamation was made that the only mail that could be sent abroad was to go by the official posts. By 1598 it was possible to send mail to Ireland via two routes - Holyhead and Bristol. However, unofficial postmasters still plied their trade until the reign of Charles I when Thomas Witherings was apponted Postmaster of England. In April 1633 Witherings was sent on a visit to the Calais and Antwerp to regularise the foreign mail service, and he subsequently became so efficient that he gained a virtual monopoly on the routes from the capital to Bristol, Norwich, Plymouth, Edinbugh, Holyhead and Dover, all places linked to foreign trade.

Mail in Early Modern England was notoriously unreliable. Footpads and thieves lurked on all the highways, and the post was often the target. Some post boys had 'arrangements' with local thieves. Added to this, many roads only had a weekly or bi-weekly service. I soon realised it was no good, as a novelist, thinking that the letter your character has sent would go the same day. It might be a week before the letter even began its journey.

The post was then subject to the vagaries of its individual riders, and in the 18th Century John Palmer of Bath described the problem of postboys:


'an idle boy without character, mounted on a worn-out hack, who, so far from being able to defend himself against a robber, was more likely to be in league with one.'

John Palmer, who owned a theatre in Bath, used a coach to take his theatrical scenery from town to town. Finding this quicker than the mail,  he conceived of the idea of doing the same for the post. The then Chancellor of the Exchequer, William Pitt, allowed him to make a trial run carrying the post between Bristol and London. Under the 'stage post' system the journey had taken 38 hours. The coach, funded by Palmer, left Bristol at 4 pm on 2nd August 1784 and arrived in London just 16 hours later. The government was impressed, so the mailcoach was born.


To increase speed and efficiency, mail coaches in England were made to an approved design. Mail was held in a box at the rear where the only Royal Mail employee, who was armed, was allowed to stand. The guard's seat could not be shared with a passenger. The service ran to a punishing schedule, which meant that aside from quick changes of horses, the coach only stopped for collection and delivery of mail. The toll and turnpike gates had to be open by the time the mail coach passed through, and the gatekeeper was warned to open the gates by the blaring of the posthorn.

Mail coaches were able to travel the roads toll-free, but even by Regency times the frequency of foreign correspondence was limited. Just before the advent of the railways, Horne's Foreign Mail Service left St Martin's le Grand  each Tuesday and Friday night. It travelled all night and arrived in Dover at 8.15 the next morning. This gives some idea of the speed and the state of the roads.

Even after researching postal history, I still find myself calculating anew for each novel what sort of length of time my characters might expect to wait for their mail.


Images from Wikipedia
Bibliography:
From Track to Highway -- Gibbard Jackson
Masters of the Post; The Authorized History of the Royal Mail -- Duncan Campbell-Smith

What an interesting story. We tend to think of the mail service starting with the introduction of the postage stamp.

You know, I’ve done historical research for a lot of things, but this is definitely a problem I’ve never had to deal with! Thanks for the fascinating post! Who would have thought Edward IV and Richard III found a speedy way to get their mail delivered quickly? Or the origins of the mail coaches?

Interesting post, thanks. You've probably already come across these, but J Crofts, Packhorse, Waggon and Post (RKP 1967) and the more recent D Gerhold, Carriers & Coachmasters (Phillimore 2005), are very helpful on this topic. It still amazes how far road traffic could get in the medieval period - e g, ropes and cables from Dorset travelling to London in the 14th century, shipments from Southampton getting to Leicester in the 15th century.
Twitter: @DrIanFriel

Excellent post, Deborah. Shared on my FB author page in the run up to my workshop at the HNS conference on knowing your nags - or rather 'horse for courses'.

Thanks for your comments everyone, and looking forward to your talk at the conference Jane. Going off to follow you on Twitter now, Ian.