The King, his lover and his lover's wife by Elizabeth Fremantle

Our guest for May is Liz Fremantle who used to be a full-time History Girl. Here she talks about her latest novel.

E. C. Fremantle has a BA in English and an MA in Creative Writing from Birkbeck. As Elizabeth Fremantle she is the critically acclaimed author of four Tudor historical novels: Queen’s Gambit, Sisters of Treason, Watch the Lady and The Girl in the Glass Tower and has contributed to various publications, including The Sunday Times, Vogue, Vanity Fair, The FT and The Wall Street Journal. She lives in London and Norfolk.
www.elizabethfremantle.com

On New Years’ Day 1606 a couple were married at King James’s court, in an ostentatious ceremony as close to a royal wedding as it was possible to get, without any of the parties actually being royal. The young pair were at the pinnacle of the aristocracy, both from powerful families. He was the Earl of Essex, son of an infamous father who had been executed for his ill-starred rebellion against Queen Elizabeth. She was Lady Frances Howard, daughter of the Earl of Suffolk, a family with close historical links to the Tudor throne – Howard women were sought-after brides.

This was no Harry and Megan love match. As was the norm for aristocrats in Early Modern England, it was a dynastic marriage, but unusual in that it was designed to unite two opposing political factions. The Howards had long been a powerful force and were shown great favour by the new King James when he came to the throne. They publically held the same religiously tolerant political position as the King and were keen to strike treaties with old Catholic enemies like Spain. The Essex faction, back in favour having helped James to the English throne, supported a hard-line Protestant agenda and were more inclined to war than ‘jaw’. Consequently, the wedding, as a catalyst for peace between warring parties, heralded an air of optimism and unity in the early Stuart court.

The pair were young, she fourteen and he still thirteen, which was unremarkable for such marriages of the period. But the risks of childbirth for a girl so young were great, so Essex was sent to Europe for a time to be reunited with his wife a few years later. There was little love lost between the couple when they finally came together. But more significantly, during Essex’s absence the power balance at court had shifted and the deep-rooted differences between the Howards and the Essex faction had once more begun to crystallise. The optimism of 1606 was a distant memory by 1612; the Essex faction was losing their influence, so the marriage was no longer serving its purpose and the Howards were keen to extract Frances. They were forming other plans for her.

There was a new star at court. Robert Carr had attracted the attention of the King, who had a penchant for beautiful young men, and had consequently risen to a position of power as the royal favourite. Carr, in the market for a wife, was taken with Frances, and her family saw an opportunity to consolidate their close ties to the King. Their intention was to extract Frances from her marriage with Essex, whose star was on the wane, and hitch her to Carr, whose star was rising. But, even with the backing of the King, who could refuse his favourite nothing, this would not be easy.

In 1613 an annulment was proposed to a church commission. This was audacious, to say the least, given that the couple had lived together for some three years. But annulment was crucial, as divorce meant neither party could remarry in the lifetime of their former spouse. Both parties claimed the marriage hadn’t been consummated. But they were treading a fine line. For Essex to be publically deemed impotent would not only incur ridicule but spoil his future potential in the marriage market.

His friends testified that though he was unable to perform with his wife, he was certainly capable with other women – they had seen it for themselves. One can only imagine the atmosphere in court while the discussion of the young man’s erection took place before the bishops. Frances bore the brunt of the public shaming, being labelled a whore and a witch who had made her husband impotent by nefarious means. She was charged to undergo an inspection, which involved several respectable matrons and midwives all having a prod around her nether regions to see if she remained virgo intacta.
A scandal of vast proportions blew up with ribald news-sheets having the kind of field day the red-tops have when a footballer beds a woman who is not his wife. It was generally believed that Frances must have been substituted by another, purer, woman for the purposes of hoodwinking the respectable matrons. A contemporary rhyme put it thus: "this dame was inspected but fraud interjected/ A maid of more perfection. "

The church commission deliberated for months and proceedings were further delayed by an old friend of Carr’s, Sir Thomas Overbury, who was vehemently opposed to the plan, threatening to prevent the annulment. He was thrown into the Tower on orders of the King, where he died. Eventually the King, who was keen to see his favourite married for reasons of his own, intervened by appointing two further bishops to push the decision in his favour. The annulment was eventually granted. The favourite, now the Earl of Somerset, was married to Frances Howard by the same bishop who performed her first marriage and in equal splendour. An entire week of court celebrations marked the nuptials.

The new Earl and Countess were riding high with the King’s favour – the ‘it’ couple of the Jacobean court. However, their troubles were only in temporary abeyance. When the Essex crowd saw a way to gain back their influence, the couple were to find themselves in extremely treacherous waters. The ensuing scandal would rock the court to its foundations and come perilously close to the King himself, forming the first dent in the Stuart monarchy, which would topple some two decades later.

It is these murky and murderous events around the glamorous Somersets that formed the basis of my novel The Poison Bed. 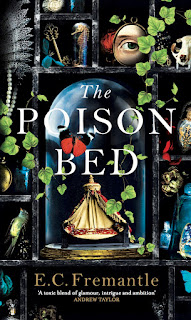