Home To Vote, by Carol Drinkwater 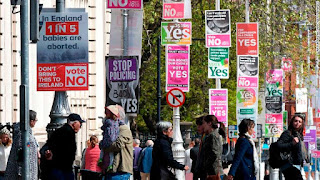 As I write this, planes from everywhere are disgorging bands of women into airports across the Republic who have flown home to Ireland to vote YES to the repeal of the Eighth Amendment. It is a vital vote in Ireland today and by the time you read this, the result will be in. I am praying that it will be an overwhelming YES.

The Irish diaspora is coming home to vote for the repeal of the eighth amendment.
This is a clip from Dublin airport yesterday
https://www.msn.com/en-au/video/lifestyle/irish-diaspora-arrives-at-dublin-airport-ahead-of-historic-abortion-referendum/vp-AAxLFDc

But what is the eighth amendment?

Have a look at this video. I found it on the British Independent newspaper site and I thank the paper for allowing its use to spread a clear understanding of the situation and what is at stake.

The eighth amendment was brought in to law in Ireland on 7th September 1983. Its implementation gave equal rights to the unborn and to the carrying mother. This has meant that any woman who has aborted a child in Ireland  for whatever reason including as a rape victim has been subject to up to fourteen years in prison.
Pregnant women from Ireland have been travelling to Britain, Holland, elsewhere in Europe, even to off shore boats carrying medical facilities to offer abortions. Why? Because their own doctors are not allowed to offer  termination under any circumstances.  Backstreet abortions still exist in Ireland. And, of course, we all know the risks involved with these.

Savita Halappanavar died from a septic miscarriage in Galway Hospital in 2012. She was a dentist, thirty-one years of age. When it was clear to everyone that she would miscarry the child, she requested an abortion and it was denied under the Eighth Amendment. She lost her life.

The reality is that women need the right to choose for themselves knowing their own circumstances better than anyone else. Our bodies, our choice.

Today, I hope, history will be made. Be wise and forward-thinking, dear Ireland.

As I sign off, less than an hour before this post goes live, The Irish Times is predicting a landslide  YES vote. Up from the ashes, Ireland, and into the twenty-first century.
History in the making.

And history was made! Now for Northern Ireland. . .