Annora of Iffley, by Deborah Burrows

The Grade I listed Church of St Mary the Virgin, Iffley, near Oxford, is one of the jewels of Oxfordshire. It is a magnificent example of Norman architecture and style, largely unaltered by later generations and is well worth a visit. 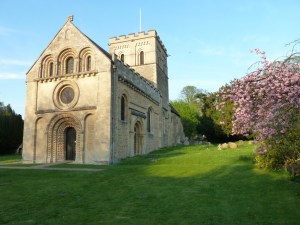 Most people go to Iffley church to see the magnificent carvings around the south and west doorways. The double beakhead carvings over the west door are supposedly unique. 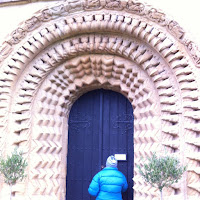 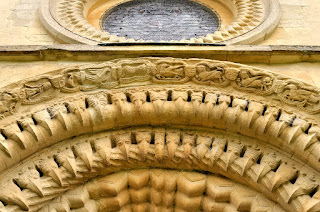 But the carvers' imagination really went wild in the south doorway, with centaurs, kings, mermen, green men and all sorts of wonderful things.

St Mary the Virgin is possibly the last Romanesque church to be built in England and was finished around 1160.

The church was built by the Norman St Remy family, with help from the de Clintons of Kenilwoth Castle. The building is remarkably untouched, although the east end was extended in around 1230.

This is when a cell was constructed on the south-side for the anchoress, Annora, who lived for nine years enclosed in a cell beside the church. She died in the cell and is probably buried there.

What is an anchoress?

An anchoress (male, anchorite) is a recluse – someone who lives apart from other people. She is someone who withdraws from secular society so as to be able to lead a life of intense prayer. Unlike hermits, anchorites and anchoresses they were required to take a vow to remain permanently enclosed in a cell, often attached to a church.

A woman who wanted to be an anchoress applied to the bishop, who had to assure himself that the applicant had sufficient financial means to support herself, and that she was suited for the commitment required.

The anchoress then underwent a religious rite of consecration that closely resembled the funeral rite, because after this she would be considered dead to the world, a sort of living saint. She had a certain autonomy, though, as she did not answer to any ecclesiastical authority other than the bishop. 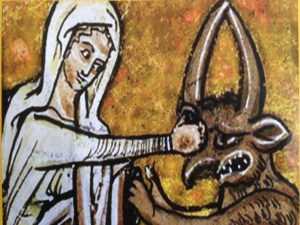 Anchorite cells might be of wood or stone, and most were physically attached to a church. Within the simple cell would be an altar for prayer, and, often, a stone grave slab in the floor to remind the anchorite of their mortal nature. The anchorite would never leave the cell and was expected to live a life devoted to contemplation and prayer, but she might read books of a spiritual nature, and have access to writing material.

It was a great honour for a village to have an anchorite or anchoress at their village church, and as there was no vow of silence, villagers would drop by to chat or seek her advice. She had a window open to the world on one side (with a curtain to allow her privacy), and a window opening into the church on the other, to enable her to see the high altar and view the church services. She also had a servant, who lived in a small chamber attached to the cell. One of the requirements was that an anchoress be wealthy enough for a servant, who would prepare meals, fetch water, gather firewood, remove waste and such things for the woman who could never leave her cell.

In the twelfth to the thirteenth century there were 92 anchoresses in England (and only 20 anchorites). Iffley had one of these.

Annora, the anchoress of Iffley 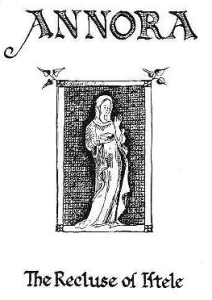 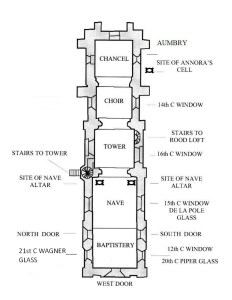 Annora, Anchoress of Iffley was born in 1179, one of the surviving six children who survived out of sixteen born to William de Braose, a powerful baron with large estates in the borders between England and Wales. Her mother, Mathilda, was a fiery tempered Norman lady who brought with her to the marriage lands in Gloucestershire, near Tetbury.

One of Annora's brothers, Giles, became Bishop of Hereford, and her sister, Loretta, became Countess of Leicester.

Annora married Roger Mortimer, another powerful Norman baron. She brought as her marriage portion the lands near Tetbury that had belonged to her mother. They had no children.

Her story is a sad one. Although her father, William de Braose, had been a strong supporter of King John early in the reign, in 1207 he quarrelled with the king and was outlawed. When william fled to France John was so enraged that he behaved viciously to the whole de Braose family. Mathilda and her eldest son were put in Windsor Castle and left to starve to death. Loretta’s lands were seized, and she and Giles fled to France. Annora herself was imprisoned in Bristol Castle with four of her young nephews and was only freed in 1214.

We know little of her life after her release, but her husband died in 1227.

Her sister, Loretta, became an anchoress in a cell near Canterbury. It seems that Annora decided to follow her lead, and applied to become an anchoress at Iffley in 1232. Perhaps she sought a life of untroubled contemplation after her turbulent earlier life.

Annora was allowed to retain her marriage portion, which amounted to l00s a year. Other gifts would have come, including from the people of Iffley. Court records show that Henry III himself gave instructions almost every year that oaks from the forest Shotover should be sent to “Annora the recluse of Iftele” for firewood “as a gift from the King”. One occasion he also sent a sack of grain, on another a robe, and on another timbers for building. 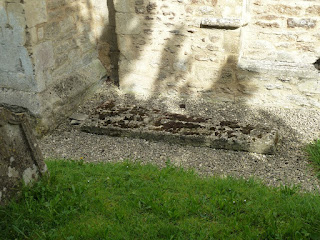 Annora seems to have taken to the role of anchoress well, and it is thought that her money may have paid for the new chancel, extending the church eastward from its original format. Her cell would have been built out of timber or stone, more like a small house really. But on the floor of her cell there will have been a stone coffin lid to remind her of her death. This is the coffin.

There is the ghost of an arch against the church wall, which is believed to be a blocked-up window marking the site of Annora’s cell. The window would have given her a view of the altar, making it possible for her to participate in the services held in the church without leaving her cell.


It seems that Annora's life as an anchoress lasted nine years, because around 1241 records of gifts from Henry ceased, and nothing more is heard of her. Annora probably died and probably was laid to rest beneath the grave slab that was set in the floor of her cell. It is highly likely that the 13th-century grave set between the chancel wall and the old yew tree in the churchyard is Annora's grave.

As Ruth Nineham says in her booklet: "Annora may have become an anchoress partly because, as a widow, she needed a safe haven in a turbulent world; but such a way of life could only have been chosen by someone who was highly motivated towards contemplation. Day after day she will have gazed on the altar in her cell and meditated on the psalms, on the lives of the saints and particularly the Virgin Mary — arid said monastic offices. The inner world will have been her reality." 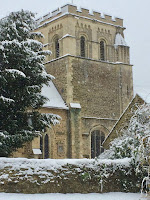