The Reading Whirlwind and the fate of Henry West, by Leslie Wilson 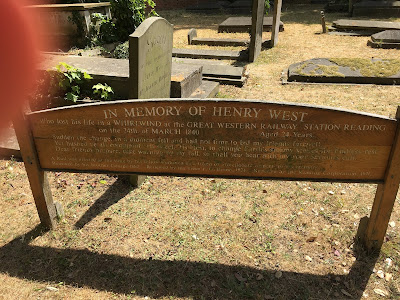 They were building the new Reading Railway Station, which was to carry businessmen to London, to transact their business in a day and get home in time for dinner, connect Reading to the West Country, so that its citizens could go on holiday, and so on, when what the Reading Mercury called 'an unfortunate accident' took place. A shed about 200 feet long had been put up at the back of the Station-House, for 'the reception of the trains and the convenience of passengers.'

This shed featured a lantern to allow light in, and at about half past three on Tuesday, March the 24th, a young man called Henry West (the paper, however, couldn't be bothered to get his name right, and called him William, was working up on this lantern, as yet unglazed, when a loud noise, like thunder, shocked the people in the area around the station.

There had been a high wind, which had turned into a whirlwind and blown poor Henry right off the roof; his body was discovered about 200 feet away. Several other men were 'more or less injured' including Mr Grissel,  belonging to the 'extensive' firm of Grissel and Peto, contractors for the building of this section of the line, was wounded on the head by bricks falling from the chimney. He was taken to the George Inn (a long-established coaching inn) and attended to, and the newspaper was glad to report that he was out of danger.


They picked the remains of Henry West up and took him to the Boar's Head pub in Friar Street (definitely a more humble establishment than the George, presumably because Henry was a corpse, as well as being of lower social class than Mr Grissel) Later, an inquest was held, and a respectable jury gave a verdict of accidental death.

Henry was a single man of about 25 years old, a journeyman carpenter, born in Wilton, in Wiltshire.
I haven't been able to find out anything else about him. There used to be a rail in his memory at the far end of Platform 4, which was the busiest platform in the old station (now Platform 7), but when they revamped Reading Station they took the rail away. Perhaps they didn't want passengers to be unnerved by the realisation that they were standing in an area subject to miniature tornadoes? 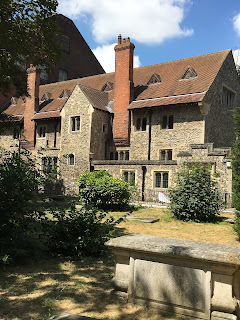 The monument pictured stands in the churchyard of St Lawrence in Reading, on land that once was part of Reading Abbey, close to the old hospitium, or guesthouse of the Abbey, which was to become the first premises of University College Reading. It's a peaceful spot for a memorial to one whose life ended in such sudden violence.

The wooden board reads:
Sudden the change, in a moment fell, and had not time to bid my friends farewell,
Yet hushed be all complaint, 'tis sweet, 'tis best, to change life's story scenes for Endless rest
Dear friends, prepare, take warning by my fall, so shall you hear with joy your Saviour's call.

The board was put up by his fellow workmen, about 40 of whom attended his funeral at St Laurence's. It was renewed by his brother George in 1862, and by his niece F G Rixon in 1924. Reading Corporation renewed it in 1921.

I'm sorry that the rail was taken away from Reading station, but glad the monument is still there in the churchyard. It stands, in a way, for all the  men and women whose lives have for the most part been completely forgotten, yet whose labour was crucial in constructing our railways, our public buildings, our canals, our roads, and the many old houses which we still value.

you can see a picture of the Boar's Head, where Henry's body was taken, here
Posted by Leslie Wilson at 01:30

What a strange, sad story. I'm glad Henry has his memorial, and that he is not entirely forgotten.