Following in the Footsteps of Dirk Hartog by Rosemary Hayes

In October 2016 I went on a month long trip promoting my shipwreck books in Western Australia and taking part in the celebrations to mark the 400th anniversary of the landing of the Dutch mariner, Dirk Hartog, in Shark Bay, 500 miles north of Perth.
My fascination with the 17th and 18th century Dutch voyages began eight years ago when I visited the Shipwreck Galleries in Fremantle for the first time.
I was aware of the powerful Dutch East India Company (the VOC), its establishment of headquarters throughout Asian countries and, in particular, its hugely profitable trade in spices: during the Dutch ‘Golden Age’ a handful of nutmegs was so valuable that it was worth more than the price of a house and just a single nutmeg would buy you a horse! But what I didn’t know was that, by 1617, all the great VOC trading ships were required to adopt the new Brouwer route, sailing South from the Cape in South Africa before turning West to pick up the ‘Roaring Forties’ winds and then North towards the East Indies, parallel with the coast of Western Australia or, as it was called at the time, ‘The Unknown Southland’.
The Shipwreck Galleries were a revelation and as soon as I entered I was hooked. As I stared at the salvaged hull of the doomed ship Batavia, at the stone blocks destined for the castle gate in Java and all the rescued artifacts and then read about the mutiny, the shipwreck, the massacre on the Abrolhos Islands, the eventual retribution and the marooning of two young mutineers in 1629, I knew that this was a story which would haunt me and that some day I’d have to write about it. 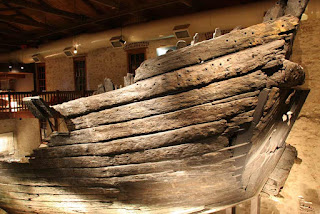 Why had I never heard of this appalling event in Australia’s history? What if those two young men, Jan Pelgrom, a cabin boy of 18 and Wouter Loos, a soldier of 24, had survived and integrated with the coastal aborigines? If they had, then they would have been the very first European settlers in Australia, nearly 150 years before Cook sailed into Botany Bay!

Since then, I’ve been on quite a journey. I have written two books about the early Dutch shipwrecks off the West Australian coast, ‘The Blue Eyed Aborigine’ (about the notorious Batavia’ shipwreck) and  ‘Forgotten Footprints’ (about the wreck of the Zuytdorp which disappeared in 1712, dashed against remote cliffs, but with evidence of survivors) have visited the Abrolhos Islands where all the Batavia horrors occurred, toured schools in the Eastern States, flown over the Zuytdorp cliffs, travelled by boat parallel with Red Bluff, South of Kalbarri, from which so many early Dutch mariners took their bearings, given the Batavia lecture at the Maritime Museum in Fremantle and, most recently, had an unforgettable trip from Yallingup in the South of the State up to Shark Bay, speaking to schools and other groups about my books and about the rich maritime history of Western Australia and shadowing the voyage of the Duyfken, a replica of the smallest ship of the first fleet to set sail from Amsterdam in 1595. The replica Duyfken took nearly three months to sail from Bunbury in the south of WA, calling in at ports as she made her way north, with a fantastic exhibition about the Dutch traders and welcoming thousands of school children and others on board, finally arriving in Shark Bay in time to mark the 400th anniversary of the landing of Dirk Hartog at Cape Inscription. 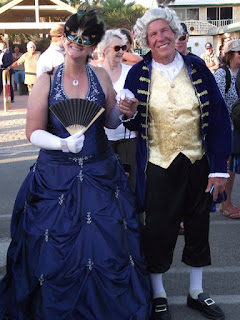 I felt very privileged to be part of the celebrations, to attend the moving opening ceremony, watch the procession of cardboard boats made by local children, admire the costumes for the 17th century ball, crawl over the Duyfken and travel across to Dirk Hartog Island and see the new commemorative plaques and the cleft in the rock into which Dirk Hartog had rammed his original post, with a flattened pewter plate attached. On the plate he had scratched a record of his visit to the island. Its inscription (translated from the original Dutch) reads:
1616 On 25 October arrived the ship Eendracht, of Amsterdam: Supercargo Gilles Miebais of Liege, skipper Dirch Hatichs of Amsterdam. on 27 d[itt]o. she set sail again for Bantam. Deputy supercargo Jan Stins, upper steersman Pieter Doores of Bil. In the year 1616. 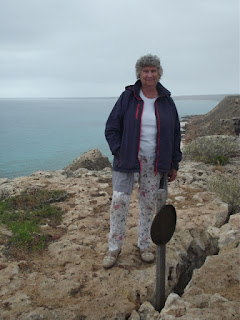 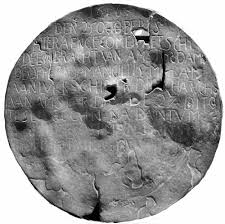 The day I left WA to return to the UK, I was able to fit in a visit to the newly opened exhibition at the Maritime Museum in Fremantle – ‘Travellers and Traders in the Indian Ocean’ and see the original of the Dirk Hartog plate (on loan from Holland and having just been brought over by the Dutch King and Queen) and to learn that the very latest research will soon be available into whether Western European DNA found in some Aboriginal coastal tribes can be traced to pre-settlement days.
And yet, whenever I go into Australian schools and ask the question: ‘Who was the first recorded European to set foot on Australian soil?’ nine times out of ten the answer is still ‘Captain Cook.’ 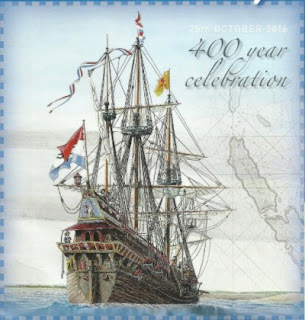 Please can I ask a genuine question? You say that "by 1617, all the great VOC trading ships were required to adopt the new Brouwer route. . ."
Why was this "required"? Did the VOC lay this down as the only official route and was it a consequence of something other than the force of the winds on that particular ocean route?

I'm pondering here. Was this so the route could be protected, eg by other VOC ships en route? Or were there specific areas of the journey where they'd meet enemy ships or attacks?

If - especially with this being a reserve post - you don't see this, Rosemary, or aren't able to answer at the moment, I quite understand.

Penny, see my separate email to you on the subject of the Brouwer route x