Flawed heroes of the RAF. A tribute to Derek Robinson

On Tuesday, I took my children to St James' Park to see the RAF's 100 anniversary fly-past. It was extraordinary. History flew above our heads - Spitfires and Hurricanes. Early jet planes. The deep roar of the modern fighters. And the Red Arrows, of course, streaming their colours against the blue sky. 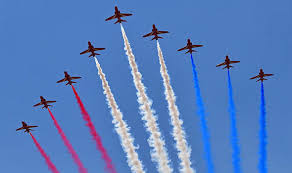 Children and adult alike were entranced. The power of it! The glory of it! What must it feel like, I wondered, to fly such a machine?

I will never know. But I can come close, through the transporting magic of fiction. More specifically, in the wonderful, underrated, utterly brilliant books of Derek Robinson. Robinson has written a series of books about the air force, with settings ranging from World War 1 to the Cold War.

When I got home, I turned to A Piece of Cake, his 1983 novel about a squadron of Hurricanes in the Second World War. Here, early on, is a description of a Hurricane taking off:

"As soon as he released the brakes and let it roll for take-off, Mother Cox began to sense the wash of air over and under the wings, the hint of lift in the tailplane, the hurrying stutter of the wheels, and then that vast invisible rush that rewarded the whole machine with the gift of flight."

Derek Robinson came close to winning the Booker prize in 1971 with his debut novel, Goshawk Squadron. The prize that year went to VS Naipaul, but Saul Bellow was one of the judges and fought for Goshawk to win. It is a superb book, about a squadron in the Royal Flying Corps. Stanley Woolley, the Squadron Leader, is the anti-Biggles. Cold, cynical and violent, Woolley unravels before our eyes. The humour is sharp and bleak; the death toll in the Squadron is high and miserable. Robinson has a trick of sketching a character closely, making him human and recognisable, and then killing him off with a laconic flick.

Robinson has been compared to Joseph Heller, but I think he is better. All Heller's bleak anti-war comedy comes from authorial trickery. Robinson's humour is darker and more truthful, coming as it does from the dialogue between young men who are brutal and brutalised by the horrors of war.

Woolley batters his men into forgetting notions of chivalry. He teaches them to shoot the Germans in the back. "The amateurs played at fighting, they kept their scores and rejoiced in their adventures and they were brave, good-humoured warriors. But Woolley took it seriously. He had asked the ultimate question - what's it for? - and got the obvious, only answer. You flew to destroy the enemy. You did not fly to fight, but to kill. It was neither fun, nor adventure, nor sport. It was business."

There is a poetry, too, in his sharp prose: these casual, unsentimental young men recognise that lonely impulse of delight experienced by Yeats' Irish airman. They would take the piss out of him, though, for expressing it. "It was part of Fighter Command's undergraduate quality: an implacably bright, slangy, superficial attitude, the kind of outlook that took nothing seriously except the supreme importance of being in Fighter Command, and that went without saying."

In a Piece of Cake, Fanny Barton thinks he has shot his first German bomber: ".. the bombers slid into view, ahead and above, perfectly silhouetted.; three Junkers 88s. They appeared so beautifully, so cleanly, that his lungs expanded for sheer joy. "Attack, Attack!" he called. He hauled back on the stick and tasted jubilation as the leader swam steadily bigger and blacker in his sights. Every muscle was tensed to hold the hurricane steady when he pressed the button, but even so the blaze of fire that raced from his wings made him flinch. His eight guns shaped a long cone of golden destruction."

Robinson served in the RAF as ground-crew. Every one of his books resonates with that clear, deep authenticity that we all, as writers of historical fiction, hope to achieve. Yes, you say to yourself as you put down Robinson novel - exhausted, and sad and a little fretful. Yes, that is how it was.

Thanks for this post, Antonia, and these recommendations. My own father flew in a Lancaster bomber, but always, always turned away from talking about the experience, except in the lightest, most deflecting * dismissive style. One day, I tell myself, I will read some books like these and try and find out why.

The RAF flypast was a glorious spectacle though, even on the tv!

I agree with Saul Below. I would have been happy for A Piece of Cake to win also. I loved the writing in that work.

I hadn't heard of Derek Robinson - thanks, Antonia.