"Graven with Diamonds" by Nicola Shulman - review by Katherine Langrish 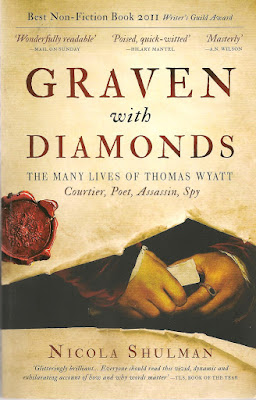 I’ve always loved Thomas Wyatt’s poetry, so I was delighted a couple of years ago to come across Nicola Shulman’s wonderful account of his life and poems, ‘Graven with Diamonds: The Many Lives of Thomas Wyatt, Courtier, Poet, Assassin, Spy’ (Short Books, 2011).  I meant to review it then, but was distracted by other things. Having just read it for the second time with as much thrilled admiration as before, I feel impelled to tell you all about it. You have to read this book!

What makes it so different, besides being a detailed and knowledgeable biography, is Shulman’s fascinating interrogation of Wyatt’s lyrics. It is not a literary investigation, not an analysis of how he wrote. Rather,

This is a book about the uses of Wyatt’s love poetry; why he wrote. … At Henry’s [Henry VIII’s] court, Sir Thomas Wyatt and his poems were the hub and centre … and if we run the story of Wyatt’s life and times behind his lyrics, they – these apparently slight, unaddressed, undated, unadorned songs – will show us that they had more uses than we might imagine. Not all of their uses are evident to us now. Some of them would have been hidden even to Wyatt, at the outset. When Wyatt began to write poems he could not have guessed into what strange service they would be pressed by the changing times. To see their changing purpose is the purpose of this book.

Wyatt was a courtier, but what was a courtier? Shulman recreates for us the Tudor court of the 1520s and 30s with its formalities, its hierarchies, its dependence on chivalric games and lavish spectacles to ‘fill the new and potentially dangerous longueurs of peacetime’, its love of pastime (‘Pastime and good company/I love and shall until I die’, Henry VIII wrote) and above all, its youth. Aged only 21, Wyatt was one of fifteen esquires who challenged Henry – himself still in his early thirties – at the elaborate Christmas Joust at Greenwich in 1525. After the outdoor martial entertainments, the company would proceed indoors to be entertained with ‘diversions and amusements’ on the fashionable theme of courtly love. Lyric poetry was an integral part of this.

The primary social purpose of courtly love lyrics [was] that they and all the activity they generated were a way of dealing with sexual frustrations at court. In emulation of Francis I’s practices, attractive women were more and more visible at Henry’s court, and yet no more sexually available to the many young men in attendance than they had been before. Women were aloof, and men continually supplicated for favours that must not, under the rules of the system, ever come. The lyric operated in the gap between hope and expectation. 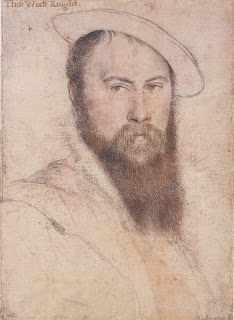 Wyatt’s poems circulated in what amounted to a private Facebook group ‘intended for a closed, incestuous coterie consisting of the most precocious and sophisticated men and women of the court’, and Shulman vividly recreates the context outside of which these poems lose much of their point.

Help me to seek, for I lost it there,
And if that ye have found it, ye that be here,
And seek to convey it secretly,
Handle it soft and treat it tenderly
Or else it will plain [complain] and then appair [be damaged].

This riddling rondeau about something Wyatt has lost, which of course in the last verse turns out to be his heart, seems yawnworthy enough – but, Shulman asks, what if what’s happening here is an actual, physical game?

What if ‘mine heart’ is also an actual object, a heart-shaped envelope made of cloth with a balloon, or squeaking thing inside?  Now the poem comes to life. Under that construction, the otherwise mystifying lines ‘Handle it soft and treat it tenderly/Or else it will plain and then appair’, make sudden sense: if you are rough with it, it will pop or squeal, and go flat.

Now we can imagine groups of giggling young people dashing about trying to smuggle an inflated heart from one room to another: a lost world in which a poem beginning ‘Comfort thyself, my woeful heart’ and includes lines such as, ‘Alas I find thee faint and weak,’ may conjure a vision of Wyatt making everyone laugh as he holds up a bladdered heart and makes it squeak. As Shulman says,

It casts new light on a tiny Holbein drawing where a young couple in elegant dress are shown with a cup and a large heart. 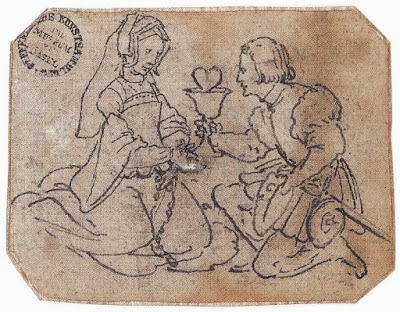 It wasn’t all sheer fun. Gossip and jealousy and spite must also have run rife through the court. Courtly love was an elaborate pretence; all the same, some young people probably really were in love – and in danger of losing their reputations.

Take heed betime lest ye be spied,
Your loving eyes you cannot hide,
At last the truth will sure be tried,
Therefore take heed!

For some there be of crafty kind
Though ye show no part of your mind,
Surely their eyes ye cannot blind,
Therefore take heed!

A poem like this could have been an uncomfortable thing to encounter, passed around and recited, as malicious smiles and sideways glances picked out the blushing subjects. Wyatt’s carefulness to name no names, the apparent anonymity and deliberate ambiguity of his verse, was as much a protection for himself as it was for others. He left it possible for himself always to protest innocence.

For what I sung or spake
Men did my songs mistake.

There was a fine line to be trodden between amusing people, and making enemies – a line which, once Anne Boleyn was queen, became a matter of life and death. 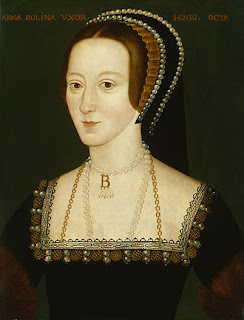 Shulman argues convincingly that Thomas Wyatt had, once, been in love with Anne Boleyn. In a sonnet written long after Anne’s disgrace and death, Wyatt declares himself to be in love again, this time with a blonde woman, someone very different from ‘Brunet that set my wealth [my well-being] in such a roar.’

‘Brunet’ is Anne Boleyn. There can be very little doubt about this, because Wyatt originally wrote,
Her that did set our country in a roar.
Then he thought better of it and amended the line in his own handwriting. In place of the too-explicit reference he put one word, ‘Brunet’ – just enough to invoke Anne, but only to those people at court who knew both that Wyatt was the author of this poem and that he had once pursued Anne Boleyn.

Unpicking the ambiguities of Wyatt’s verse to reveal the secret life of the court, Shulman shows how the elegant game of courtly love, played by young courtiers to unwritten rules which everyone understood, was ripped into coloured shreds by Thomas Cromwell. Flirting with the queen and her ladies had been de rigeur, la politesse, the correct behaviour for a courtier who wished to shine. (And it was later to be revived by Anne’s daughter Elizabeth, for her own political purposes, once she became queen.) 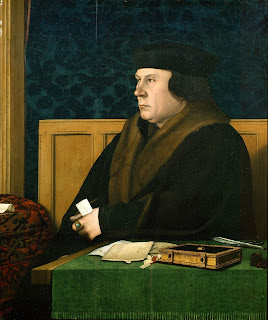 Cromwell … knew perfectly well how the courtly bargain worked in the case of a queen: amorous protestations were paid in, and favours paid out in grants, offices and promotions, not sex.

Choosing, deliberately, to interpret all those courtly flirtations literally and legalistically, Cromwell brought Anne and her coterie to the block – and Wyatt to the Tower, though he escaped deeper involvement because Cromwell rather liked him, and there were enough other victims. And yet Wyatt wasn’t silenced. Shulman shows again and again how, for those who knew how to read his ever-ambiguous lyrics, Wyatt speaks out – candidly, boldly, sometimes in anguish – about the tragic and dangerous events in which he found himself embroiled. To all fans of Thomas Wyatt, as well as to all lovers of poetry and history, I recommend this brilliant and fascinating book.

Posted by Katherine Langrish at 02:30

Sounds like a fascinating book! Does it have, perhaps, an appendix with some of Wyatt’s poems or is the t simply assumed that anyone buying a book about Wyatt will know his verse? I read a lot of historical non fiction just because it seems interesting, but I only know that one poem about Anne for which he is famous.

It doesn't have the poems, Sue, but it quotes extensively from many of them. I think you'll want to read more of his poetry once you've read this!