A Room of someone else's by Mary Hoffman 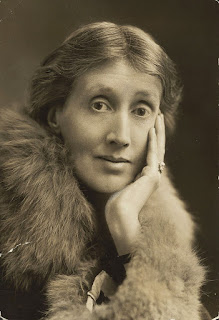 At the Pallant House Gallery in Chichester (till 16th September, then 2nd October to 9th December at the Fitzwilliam Museum in Cambridge) "Virginia Woolf: an exhibition inspired by her writings.

Full disclosure: I am not a big fan of Virginia Woolf. The books of hers I like most are Orlando and Flush, which are not considered the best. Oh and everyone likes Mrs Dalloway, which really is rather fine. But I don't think I will ever read The Waves again.

Still, I liked the idea of artworks inspired by her writings and all by women. My mother-in-law had two pen and ink drawings by  Laura Knight (who was almost her contemporary) in her bedroom, so I was interested to see more of her work, which is among the better art in this very uneven exhibition. It is Knight's The Dark Pool that is featured on the poster, showing a young women in a red dress blown about by the wind, standing on a boulder looking down at a rock pool, which might or might not be on a beach in Cornwall.

As you might expect, the star is Virginia's older sister Vanessa Bell and her portrait of Virginia was was my favourite piece (though could you say that was "inspired by her writings"?). I am hampered by copyright here and can't show you what I saw.


The story of the two sisters has been told many times. Both their parents, Leslie Stephen and Julia Chadwick, had children from their first marriages when, as bereaved spouses they married and had four more. Vanessa and Virginia were the oldest, followed by two brothers. For the first thirteen years of Virginia's life, until her mother died, she spent every summer in St. Ives, in Talland House, with a view of the Godrevy Lighthouse. She wrote in 1939 in "A Sketch of the Past," of this childhood memory of lying in bed in the nursery:

It's quoted at the beginning of a very good essay by the curator of the exhibition, Laura Smith, in Pallant House's magazine for May to October.

The holidays ceased with Julia's death and it was ten years later, after their father died, before Virginia and Vanessa returned to St. Ives. But you can see how much those long Cornish summers had on both their lives' work. Virginia described it as "the best beginning conceivable."

I wanted to see that lighthouse, waves on the beach and all but the closest you get (apart from the Laura Knight) is Frances Hodgkins' Wings over Water (1930) and Wilhelmina Barns-Graham's Rocks, St. Mary's Scilly Isles (1953). Perhaps I am just too literal.

If Virginia Woolf gave women one undying concept it is that of "A Room of One's Own," symbolising financial independence and intellectual freedom.  As Laura Clark says, "the room becomes a metaphor for autonomy and choice within patriarchal limits, a sort of reclamation of the room's function to contain. Landscape, however, becomes a metaphor for freedom and power beyond existing culture."

Hence, landscape seen through the window of a room combines both these important concepts. The only flaw with this beguiling theory is that many, many male painters use the same image.

Some of the women artists in this exhibition are associated with dominant males, unlikely Woolf herself.
Carrington is for ever associated with her passion for Lytton Strachey. In spite of her affairs with both men and women and her marriage to Ralph Partridge, Strachey was the love of her life and she shot herself two months after his death, feeling there was no further point to her life.

She was at least known by Woolf and other members of the Bloomsbury Group, Woolf writing of her in her diary: "She is odd from her mixture of impulse & self consciousness. I wonder sometimes what she’s at: so eager to please, conciliatory, restless, & active.... [B]ut she is such a bustling eager creature, so red & solid, & at the same time inquisitive, that one can’t help liking her."

It's hard exactly to see how Carrington was "inspired" by Virginia Woolf's writings.

Another woman artist overshadowed by a man is Gwen John, in her case, her much-admired younger brother Augustus.

It wasn't Augustus' fault: he acknowledged her greater talent and said that in time she would be valued more highly than him. But in their lifetimes her work was seen as "quiet" (I can hear women, particularly women writers, sighing).

So, if Virginia Woolf were alive today and visited this exhibition, would she recognise any of her ideas? She would certainly know some of the names though other later artists shown include Ithell Colquoun, Gluck and Romaine Brooks. But she was a very stringent critic of others' work and a perfectionist about her own. And there is a lot of very inferior stuff in this exhibition.

As I was writing this post, an email came from the Management Committee of the Society of Authors, embargoed till the next day, which is now past, so I can tell you all about it. You have probably all read it in the press by now anyway.

Only 13.7% of writers can now make a living from this and no other work. And women get 75% less than men who write.

So how many of us can afford that room of our own in which to write freely without financial worry about how to pay for it? What would Virginia say? It's all very well being inspired by her writing but where does that get us if we don't have the freedom to act upon our ideas?

PS: If your views of Virginia Woolf are not TOO respectful, may I recommend my friend Sue Limb's sublimely funny radio 4 series Gloomsbury?