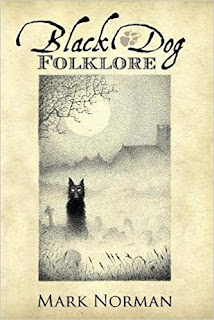 I have long been captivated by the legends and folklore surrounding the spectral creature, the ‘black dog’, ever since some years ago in Nigeria when I was saved from being hacked to death with machetes by the appearance of a large black dog who protected me. I think that dog was real, at least he felt wonderfully warm and solid, though his sudden appearance at that terrifying moment certainly seemed miraculous.

But my fascination with the black dog legends goes back even before that when, as a small child, I huddled under the bedclothes, listening to the 'Hound of the Baskervilles' on a tiny radio, when I was supposed to be asleep. Since my new medieval thriller, 'A Gathering of Ghosts', is set on Dartmoor, how could I write about that wild landscape without mentioning the huge black whisht hounds with glowing eyes that hunt the moors, terrorising anyone foolish enough to find themselves on the lonely tracks after dark.

So, in the light of this, I was delighted recently to discover a brilliant book called ‘BLACK DOG FOLKLORE’ by Mark Norman, who is leading folklore expert and researcher. This book is not merely a collection of legends. It is a scholarly, but immensely readable investigation into the origins of these tales though out history, how they are linked and how they have evolved to influence the way modern sightings are reported. The book also explores the symbolism of the black dog from ancient times and across many cultures.

Mark Norman has divided his book up into the different types of Black Dog in legend, delving into the possible explanations behind the particular black dog encounters. This includes the ghosts of black dogs which curiously in England often seem to be associated with the Civil War; dogs which are significant to certain families, appearing in the coats of arms or which have haunted the family through different generations; the protective black dogs which appear at times of danger to help lone humans; the terrifying shucks, padfoots and barguests with glowing eyes, which in legend are sometimes shape-shifting creatures. The author suggests the name shuck probably stems from the Anglo-Saxon Sceocca meaning ‘devil.’

Then there are the legends of dogs that guard treasure or haunt certain roads or bridges. In many cultures around the world a dog appears as a guardian of the underworld, an ancient mythology which finds its way into tales such as Hans Christian Anderson’s fairy tale 'The Tinder Box', where the treasure rooms beneath a tree are guarded by three dogs, the first with eyes as big as teacups, the next with eyes as big as waterwheels and the third as big as round towers.

One of the earliest records of the spectral dogs in England comes from a late version of the Anglo Saxon Chronicle written after the Norman Conquest in 1154, which describes a sighting of what seems to be the ‘wild hunt’ in which the witnesses reported seeing huge huntsmen riding black horses or black he-goats accompanied by hounds that were ‘black, big-eyed and loathsome.’ By the twentieth century, people are reporting seeing these spectral dogs with ‘eyes as big as saucers’ or ‘dinner plates’.

One of the most compelling chapters is the one about ‘Church Grims’ and death. The author points out that in many cultures dogs are linked with death omens, not least because they seem to have an uncanny ability to sense when a loved member of the family is dying and will start to howl. In Islam, for example, they are said to be able to see Azrael, the Angel of Death, approaching.

This book covers much more than simply the legends of black dogs. The author examines many aspects of folk customs involving dogs, including the practise of burying dogs in the foundations of buildings to protect them, which is found as far back as the 13th century BCE in Greece, and the custom of burying a dog in a newly opened graveyard. I have found reports of this continuing right up until the 19th century in England, the explanation being given  by then was that the spirit of the first creature buried there would be compelled to protect the graveyard, so not wanting to condemn any person in the village to that fate, a dog was put in the ground first.

The author of this book also debunks several black dog myths. When I first moved to Devon, I longed to live the village called Black Dog, wrongly assuming that was haunted by one of these supernatural hounds, but it appears that place names should be treated with caution, because though there are legends of the black dog in the surrounding area, old maps record the village as Black Boy. Nothing to do with the hound.

Like many people, I was familiar with the legend of the foul monstrous dog that was supposed to haunt the Newgate prison, but it seems there were never any actual sightings of this dog and the whole fiction was based on a pamphlet of 1638 with that title which was actually denouncing the prison conditions. A poem, written in 1596, by Luke Hutton, who had been a prisoner in the infamous prison used the phrase as a symbol for the despair felt by the prisoners. Interesting then that Winston Churchill should adopt the term ‘black dog’ to refer to his own bouts of dark depression.

Finally, if you want to discover if there has ever been a record of a ghostly black dog where you are staying, the book ends with a comprehensive listing of the black dog sightings in Britain, Ireland and the Channel Islands. It’s always worth checking before you go for that romantic midnight stroll!

Mark Norman also hosts a wonderful, and criminally overlooked podcast, "The Folklore Podcast". Highly suggest people interested in
black dogs (and pretty much anything else folklore) check out his podcast. The recent podcast on witch bottles was awesome - oh, and he has covered folklore in gothic romance as well :)

Your encounter is fascinating, I'd like to know more.

In WW1 there are multiple reports of 'dark beasts' roaming No Man's Land. These were usually explained as over-stressed imaginations or stray dogs looking for food (yes, THAT kind of food). But the reports are so consistent over location and time, I wonder just what the soldiers saw.

Thank you Karen for such a lovely review. I'm glad you find the book useful to you.

Mostly Lost - thank you for mentioning the podcast. I may have to adopt the phrase "criminally overlooked" in my advertising!! Do feel free to continue to point people to it. It is all free, after all :)

Mark my name is Garry Slater i have a story to tell of a sighting i had some years ago regarding a VERY large dog if you are interested in hearing the story please contact me email garrybrian@aol.com 07963505806