I’m at the Scattered Authors retreat this week, in lovely Charney Manor in Oxfordshire, a History Girl’s paradise. On Monday night I took part in a very enjoyable bookish version of Desert Island Discs, where castaways had to choose three books – a ‘classic’, a contemporary book and a ‘wild card’. It struck me, when it came time to think about my monthly post, that my choices all said a great deal about my love of history, though when I chose the books it was with no conscious awareness of that. So here they are for you, with some historical musings, and with thanks to Mary Hoffman (fellow panellist)  for the idea! 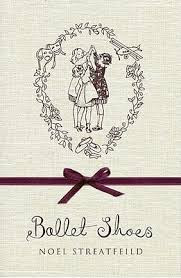 I love Ballet Shoes for its mix of grit and romance, for its three very different heroines, for the nuanced adult characters and the 1930s London setting. I first read it as a child in the 1970s, and knew immediately, when I read about the Fossils’ having to ‘save the penny and walk’, that I was in ‘the olden days’. At that age I wouldn’t have known exactly when in the olden days, because I don’t think I would have had the nous to check the date of first publication, but it didn’t matter. It was a world of nursery teas, omnibuses and genteel poverty. A world where your frock needed to match your knickers. Later I knew that this was the 1930s, and understood how shortly that inter-war period was to come to an end.

Ballet Shoes, of course, is not a historical novel – Noel Streatfeild was writing about her contemporary world, which was forty years in the past when I first read it, and eighty years ago now. My second choice was very different: 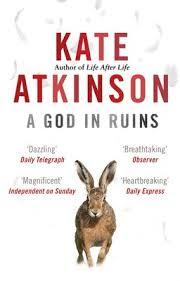 This is one of the best novels I have ever read, and is broadly historical – broad in that sense that its story encompasses about a century. It is, I suppose, a kind of family saga, except that suggests something much more conventional. A God in Ruins is structurally unconventional, moving backwards and forwards in time, and there is a conceit at its heart which I would not dream of spoiling for you which asks questions about the very nature of history and existence. Once again, as always, I loved the small material details, but unlike Noel Streatfeild, Kate Atkinson is looking back, particularly to the years around the Second World War.

Which leads neatly to my third choice:

This is a very different kind of novel. It is historical – Judith Kerr was writing in the seventies about the thirties, but it is also based firmly on her own personal history.  As in Ballet Shoes, we are in difficult circumstances, but here too the children are largely protected by heroic adults, in this case their parents. Once again, material things matter and help to bring the world to life – Anna having the right kind of pinafore for her French school, buying a pencil, travelling to Switzerland by train. 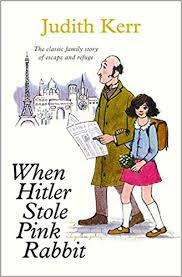 I thought I had chosen these books randomly. And, yes, on a different day I might have chosen three others. Only now do I see the links between them: they all write about a similar period, in very different ways. Between them I think they contain everything I love as a reader of fiction set in the past, and everything I strive for as a writer of historical fiction.

So – what would your Desert Island books be, and what might they say about you as a History Girl?

Oh, I really enjoyed 'Ballet Shoes' as a child too, and I love Kate Atkinson.

To choose three books for a desert island? -- Well, Kate Atkinson's 'Life After Life' because you could read and re-read it.
'
And perhaps one of Sarah Waters' - 'Fingersmith' or 'Affinity.'

Struggling a bit for a third... So many to choose from... Perhaps one of Rosemary Sutcliffe's adult novels, 'Sword At Sunset' about Arthur, or 'Rider on a White Horse,' about General Fairfax, 'Black Tom.' Haven't read either for years but loved them both when I did. A desert island would give me time to get reaquainted with them.

Difficult question, and might be different on a different day. But thinking just now I'd say
Hanta Yo by Ruth Beebee Hill - it's very long, very profound and very readable. It would last me a long time because of its size, it would make me think and it would lose me in the story. (it's the tale of a community of Lakotah Sioux on the eve of the coming of Europeans to America).

The Game of Kings by Dorothy Dunnett. Because no one writes like Dunnett and I love her playful sense of humour and wonderful way with language. She has an MBE for services to literature.

The Histoire de Guillaume le Mareschal in translation from the Anglo Norman text society. Because it brings the past very vividly and movingly to life and I discover something new every time I read it.

Oh, I like a challenge;
Childhood book would be the Secret Garden, which seemed to me to be magical!
contemporary one would have to be The Girl Before which is the book group read this month and has caught my interest but is also about control and life!
the wild card would have to a very English scandal which I am reading after seeing the TV programme, I was very young when this happened and only knew what was on the local news and the local papers in Devon. very interesting and about control again :-)
I too would choose different books on a different day esp as I have just bought Mary Rosie's War by Catherine Byrne this evening and it looks very good! so by next week, I may be choosing again!

Can fourth comment be deleted by Admin, please? Other contributors -- loved reading your choices! Very much agree about Sarah Waters. And people KEEP recommending Dorothy Dunnett so maybe I should try her now.

When I read Ballet Shoes in about 1962 I believed it so much that I thought it was only a few years old - I had no idea it was pre-war and written almost 30 years before! When I met Noel Streatfeild she told me she only wrote in bed, so never got out of bed before lunch. I aspire to this routine. She gave all her money away and died in poverty.