People often ask me how the diminishing population of native Venetians feels about the tourist hordes that dominate her more obvious streets. (Real Venetians go ‘through the linings’, as their saying goes, knowing routes the crowds never find).

Salvatore Settis has written of the danger of Venice becoming a ‘servile monoculture’ of tourism. ‘Servile’ is an insult no Venetian would easily accept. So when I see irascible or emotional signs put up by Venetians, I take them as a proof of life. They demonstrate that Venetians have not given up on their city, care about one another and will vigorously defend her against the ‘maleducati’ – the vulgar masses, who dump their rubbish on Venetian doorsteps or use her quiet corners as urinals and worse. Years ago, I translated a set of Venetian proverbs that had never before been rendered in English. One that applies here seems to be: Dio ha mandà l’om per castigar l’om. God created man to shame man. And Venetians create signs to shame those who shame their city with unsanitary and inconsiderate behaviour. They also create signs about things close to their hearts.

Those of delicate dispositions are advised to leave off reading here, as I’m afraid there is scatology to come. Honest, angry scatology, that there’s no prettying up. 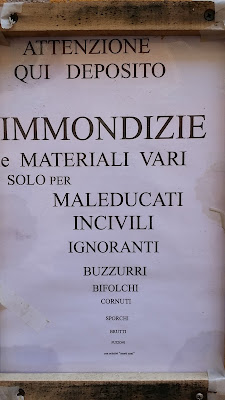 This Venetian sign is probably my favourite, because of the language. It translates as ‘This place is the depository for rubbish and other materials – only for the vulgar, the uncivil, the ignorant, the cuckolds, the yokels, the bumpkins, the dirty, the ugly, those who stink, whose relatives are dead dogs.’ One of the things I loved about this one is that it shows Venice’s quintessential maritime-metropolitan disdain for those who come from terrafirma. Or, as the proverbs say, 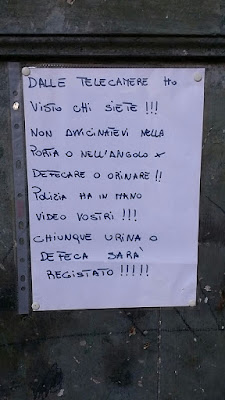 This one at right, with its porcupinery of exclamation marks, recently appeared in my own little campo. It says, ‘From the telecameras I have seen who you are!!! Don’t come to this door or this corner to defecate or urinate!! Videos of you are in police hands!!! Every urination and defecation will be recorded!!!!!

Which recalls this old Venetian proverb …
L'ànema a Dio, el corpo a la tera,
e 'l bus del cul al diavolo per tabachiera
The soul goes to God, the body to the Earth
and the arsehole to the devil, for his snuffbox.

Or this one:
El tempo, el culo e i siori
i fa quel i vol lori
Time, arses, and lords
do whatever they want

In a ‘lively’ way, the one below invites ‘I Signori Passanti’ – the Gentle Misters Passers-By – not to leave their rubbish here. In fact, it also asks other residents to desist from the practice. This place, it concludes, is not a rubbish bin (with a drawing of the same). 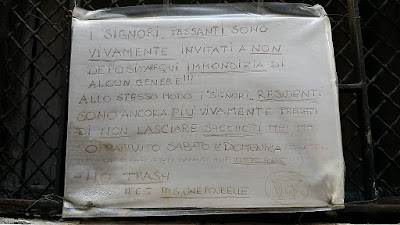 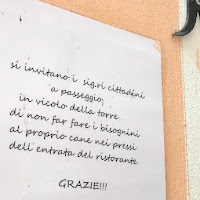 As the proverb goes,
El mondo no te dise vaca,
co no ghe xe qualche taca
The world doesn't point a finger at you,
if you haven't done something wrong.

At right, ‘Mr Citizen out on a walk’ is asked not to let his dog perform its ‘little needs’ in the entrance of the restaurant. Thanks to Rosato Frassanito for this sign.

The one below is sadder. A lost dog is always sad. When he is 15 years old, and obviously very much loved, it is even sadder. His owner thanks ‘from his heart’ and offers a reward of 200 euros to anyone who can help him find Zizzul, a medium-sized German shepherd type. 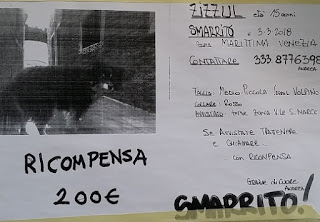 This sweet-faced dog was last seen on March 3 near the Stazione Marittima. I so hope he’s found.
In honour of Zizzul: 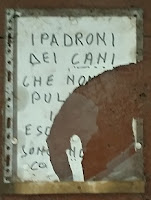 This last one clearly contained an imprecation against dog owners that so angry-making as to make one canine-proprietor to clutch a handful of the paper and rake it off the wall.

As the proverb goes,
La lingua no ga osso ma la rompe i ossi.
The tongue doesn't have bones, but it breaks bones.

Thanks for these, Michelle - and I love the thought of real Venetians going through the linings!