Before They Were Pink: The Twisted History of the Unicorn - By Anna Mazzola

These days, unicorns are everywhere: furry unicorns, flashing unicorns, unicorns on t-shirts, unicorns on pants. My four-year-old daughter has even changed her middle name to ‘Unicorn’, having decided she didn’t much like Elizabeth.

Once, however, unicorns were extremely rare, and greatly feared. 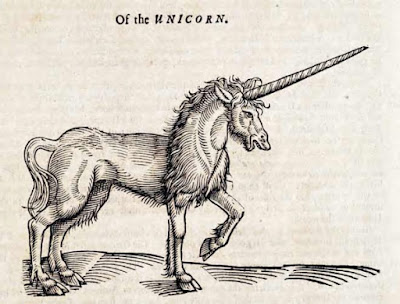 
In what is probably the first written account of the unicorn, Cestias of Cnidus, writing in 398 BC, described the beast as ‘exceedingly swift and powerful so that no creature, neither the horse nor any other, can overtake it.’

Pliny the Elder later spoke of ‘a very fierce animal’ which 'makes a deep lowing noise, and has a single black horn, which projects from the middle of its forehead. This animal, they say, cannot be taken alive.’

The beast's terrifying nature was confirmed in 4th century translations of the Bible which interpreted the word ‘re’em’ to mean unicorn: ‘God brought him forth out of Egypt; he hath as it were the strength of an unicorn: he shall eat up the nations his enemies, and shall break their bones, and pierce them through with his arrows.’ (Numbers 24:8)

This idea was still going strong in the 6th century, when Cosmas Indicopleustes, a merchant of Alexandria, reported: ‘it is impossible to take this ferocious beast alive; and all its strength lies in its horn. When it finds itself pursued and in danger of capture, it throws itself from a precipice, and turns so aptly in falling, that it receives all the shock upon the horn, and so escapes safe and sound’.


Of course, as we all know, unicorns can in fact be captured. You just need to find a nearby virgin to throw before them. This idea came from the ancient Greek bestiary known as the Physiologus, in which a unicorn sees a maiden, lays its head on her lap and falls promptly asleep.

In the Middle Ages, the unicorn and virgin were used to portray Christ's relationship with the Virgin Mary, the hunt for the unicorn becoming an allegory of the Passion. The unicorn and maiden also became emblems of courtly love and appear on many tapestries and paintings from the period. The unicorn was firmly established in European lore. 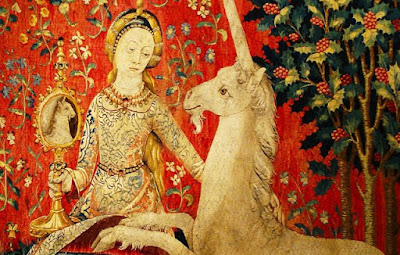 The one-horned beast was also a part of Eastern tradition as the kirin (Japan), or qilin (China), which was said to appear with the arrival or death of a sage or illustrious ruler.


The full history of the unicorn is tortuous and confused. As Chris Lavers says in The Natural History of the Unicorn, ‘Many have tried to track the unicorn’s progress, and a few have glimpsed madness along the way.’ 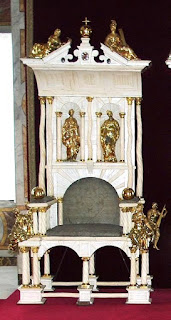 Whatever the origin of the legend, it led to a mania for unicorn horns (alicorns), which, it was said, could be used to detect poison. Pieces of horn were turned into goblets, knife handles and amulets, while smaller pieces were used to test food and wine. Alicorns became the prized possessions of monarchs. Henry VIII had his filed down and used as an antidote for poison. Queen Elizabeth I kept hers with the crown jewels. Danish rulers were crowned on a throne said to be constructed entirely from unicorn horns, but which, disappointingly, is in fact made from narwhal tusks.

Ground alicorn was ascribed a wide range of medicinal properties and was used for treatment of rubella, measles, fevers, pains and leprosy. It was an aphrodisiac, it purified water, neutralised poisons, fought off the plague and could be used to test the virginity of young girls.


By 1600 the narwhal was known to be the real source of ‘unicorn’ horns. That, however, was far from being the end of fake unicorns.

In 1663, Otto Von Guericke claimed to have reconstructed the skeleton of a unicorn, found in Germany's Harz Mountains. Many were convinced of its authenticity, despite the fact that it had only two legs, and had actually been constructed from the fossil bones of a woolly rhinoceros, a mammoth, and of course a narwhal. False alicorn powder, made from the tusks of narwhals or horns of various animals, was still being sold in Europe as medicine as late as 1741.

In the 1930s, Dr. W. Franklin Dove, a University of Maine professor, artificially fused the horn buds of a calf together to prove that unicorns could, at least in theory, exist.

Fifty years later, Ringling Bros. and Barnum & Bailey Circus told the world that a unicorn called Lancelot had ‘wandered up to a tent’ when the show arrived in Houston. They duly assigned him a caretaker, a dancer named Heather Harris, and took him on a unicorn tour. In fact, Lancelot was just a white goat whose horns had been fused together by his original owner, self-professed wizard Oberon Zell. 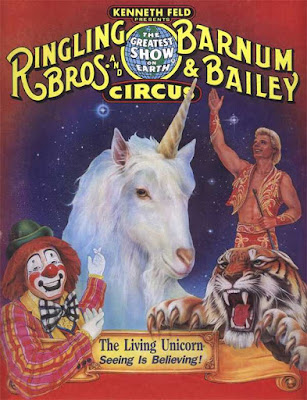 
In recent years, pink glittery unicorns have proliferated, on TV programmes, pencil cases, birthday cards and dressing gowns. As Alice Fisher put it in the Guardian, ‘Unicorns no longer have to be lured from magical forests by pure maidens, you can buy one in two clicks off Asos.’

The real animal remains as elusive as ever, but there are those that still believe. In the past few years, people claim to have glimpsed unicorns in Canada, Korea and Caithness. Talk of a 'Unicorn Safari' in Scotland has so far come to nothing. I'm still holding out hope.

Anna Mazzola is a writer of historical crime fiction. Although her kids want her to write a children's book about unicorns.

We found Lavers' book in a charity shop recently and have been really enjoying it. My daughter loves unicorns, too, although she is 11 and was really excited to see the book mentioned here today.

I've seen the historic unicorn tapestry in person, in Scotland!

When I was young, I changed my middle name to "Connemara", after the ponies. Apparently it's a chick thing.

Great website - found you through a loyal reader of yours, and friend of mine... I must remember to thank her!